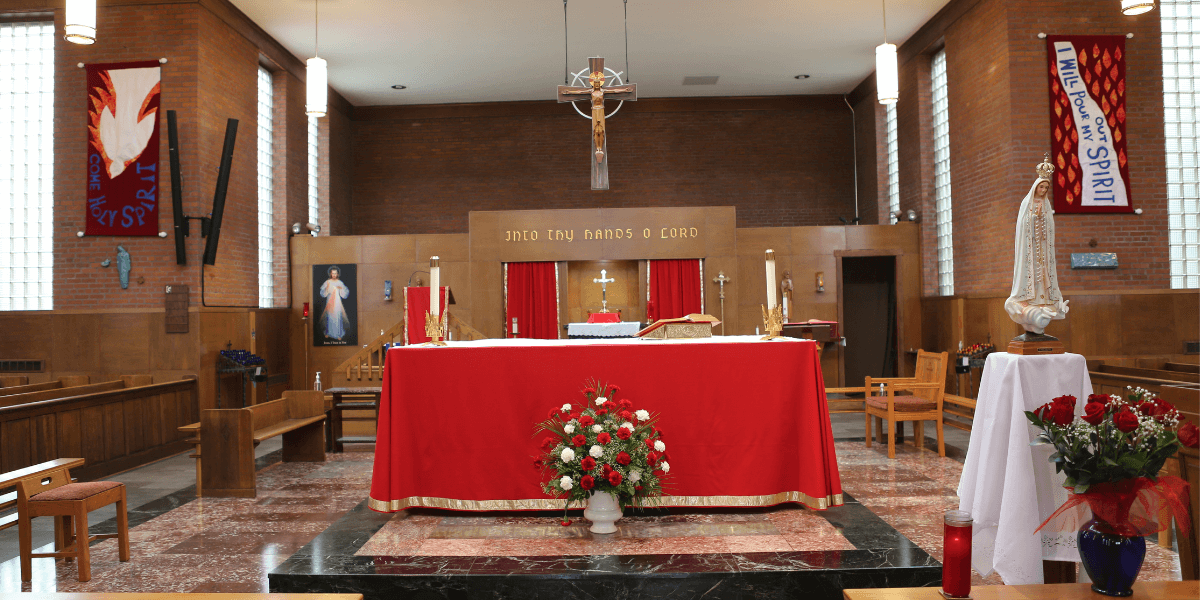 Renovations at St. Mark Church in Burlington put Jesus at the heart of the church

St. Mark Parish in Burlington has been making renovations to its church on North Avenue for the past two years and recently completed work.

The design of St. Mark Church in Burlington was conceptualized and supervised by its first pastor, Father William Tennien (later to be a monsignor). “Msgr. Tennien was very intentional in the design of the church and the selection of everything for the church,” said current pastor Father Dallas St. Peter.

The cross-shaped layout of St. Mark’s is considered to be a liturgically-based design, with the altar being the central focus and most important element in the building. This is emphasized by its location in the center of the church, by its elevated platform and by the raised roof and transom windows above the altar. When explaining the design objective of the church to the editor of Liturgical Artsmagazine, Father Tennien wrote, “What we wanted to do was to pick up the Mass and hurl it into the very midst of the congregation.

Father St. Peter realized that any renovation work needed to work within — not against — the unique architectural style of the church. The parish consulted with an architect knowledgeable in 20th-century church architecture to make recommendations that would reflect a sense of sacredness and create a more prayerful space. “Basically, what we did was highlight the architecture that was present,” Father St. Peter said.

Positioning the tabernacle in the center allowed for the original side altars to be placed on the left and right, as devotional spaces for prayer. The statue of the Blessed Mother has been placed on the left and St. Joseph on the right. A rack of votive candles was also added. This outer sanctuary area is now uncrowded and symmetrical, which is more peaceful and welcoming for private prayer.

This is not the first time that the tabernacle has been moved, but likely the second time. Originally the tabernacle was located on top of the altar. However, St. Mark’s was built before Vatican II, when the Mass was said in Latin, facing ad orientem, and tabernacles were commonly located on the high altar. At that time, Father Tennien had permission from the bishop to say Mass facing the people. For this reason the pastor commissioned a low tabernacle that could sit atop the altar without totally obstructing the view of the altar. The squat tabernacle required custom sacred vessels short enough to fit inside. The unique tabernacle and sacred vessels are still in use at St. Mark Church.

The lighting in the church was updated in the recent renovation, changing out the recessed “can” lights for handsome pendant lights. The hanging lights give the space a warmer, less austere feel — as well as dramatically improving the quality of light.

Carpeting was removed from around the raised altar space and in the outer sanctuary and replaced with a laminate flooring that resembles stone.

The sound system was updated, and a camera for live-streaming was added.

The wood paneling that runs completely around the walls of the church was given a rejuvenating facelift. The red detail in the seams of the paneling, which had nearly disappeared, was repainted. The St. Mark lions above the three doorways, which had been unpainted wood, were painted gold, along with the text above the tabernacle that reads “Into Thy Hands O Lord.”

Monica Cayia, the administrative assistant for the parish who is also a parishioner, commented that the text and the lions above the doors now “pop;” previously she had not noticed them.

The former vertical glass brick windows did not open, so clear glass panels that open were added to the bottom of one window on each of the six sides. A central exhaust fan was installed on the roof, and now the entire church can be vented. Cayia said this is great during hot, summer weather, and helps circulate the air — which is important during the Covid-19 pandemic.

Additional window work was done to the raised roof area above the altar. These windows had been glass brick and had sometimes leaked. They were replaced with clear glass, affording an inspirational view of the sky from inside the church.

The renovation work has been funded through a parish capital campaign which is in its third and final year. The motto of the campaign is, “Make Jesus the Heart of Our Church.” The renovation work that has been completed to-date respects the architectural integrity of this unique church, but more importantly it has made it a more visually pleasing and welcoming worship space.