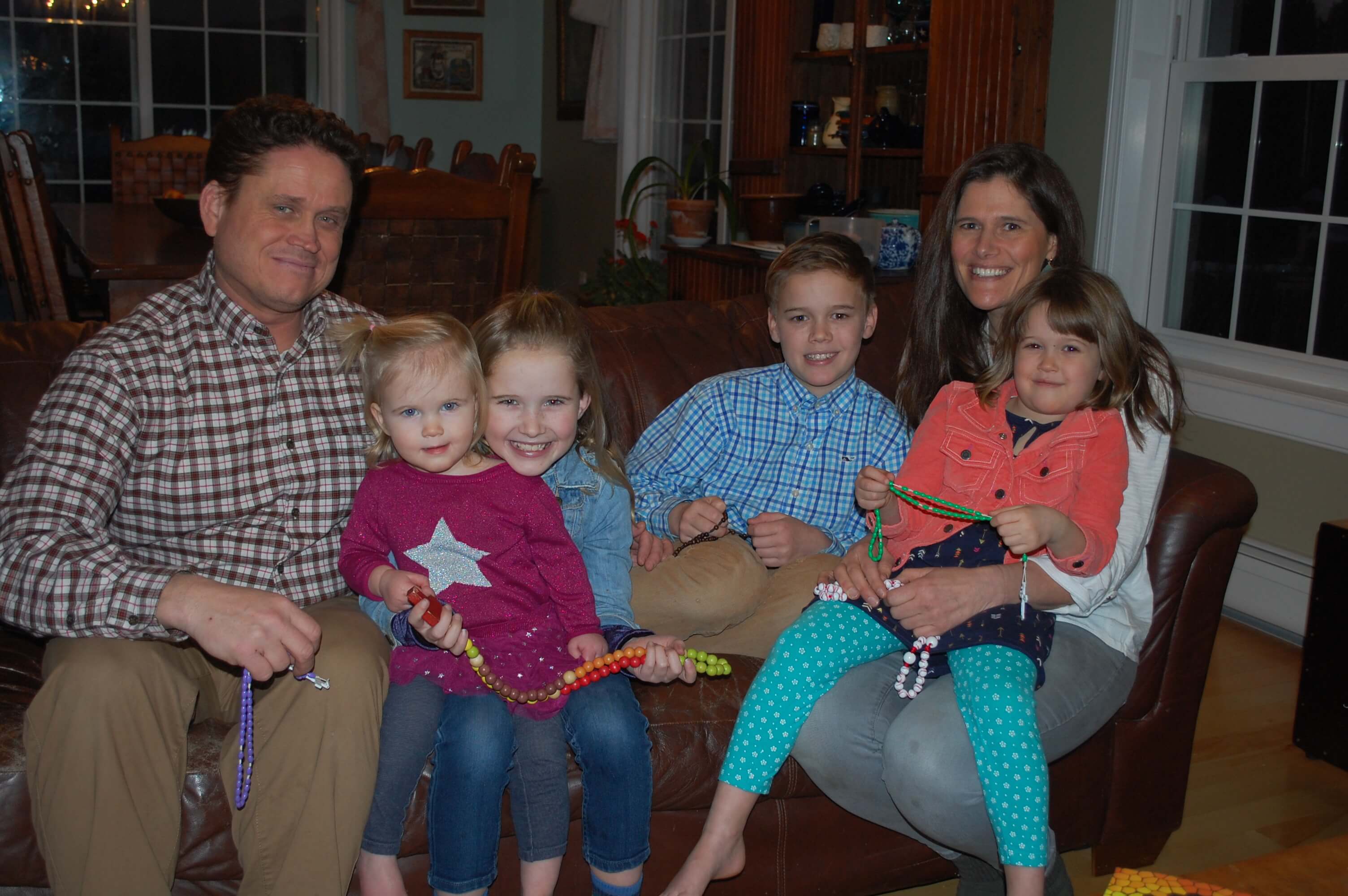 Photo Credit: Vermont Catholic/Cori Fugere Urban - Joseph and Brooke Wright and four of their children sit in their Morrisville living room where they often pray the rosary as a family.

The family that prays together

Joseph and Brooke Wright each grew up in a family that prayed the rosary together, so it was natural that they continued that practice when they were dating. Because the rosary had become an integral part of their relationship, Mr. Wright proposed marriage after they had prayed the rosary in a church in Pittsburgh. They had been kneeling in front of the Blessed Sacrament, and though she stood up, he remained kneeling and handed her a box with an engagement ring inside. “I knew she couldn’t say ‘no’ in front of Mary and Jesus,” he recalled with a laugh. Now married for 19 years and the parents of seven children ages 18 months to 18 years, the Wrights — members of Blessed Sacrament Church in Stowe — maintain their family rosary tradition.

They usually gather the family in the living room of their Morrisville home, some sit on one of the two brown leather couches while others sit or kneel on the floor. It’s a cozy time even the youngest members appreciate. “It doesn’t get boring because we all get together as a family,” said Joni, 5. Maggie, 8, said when she prays the rosary she thinks “about how Jesus died and saved us.” “The rosary has been very powerful in my life, especially in times of struggle or when I want to make the right decision or root out sin,” said Mr. Wright, an immigration officer. His wife, a music teacher at The Bishop John A. Marshall School in Morrisville, agreed, adding that the rosary is a way to keep close to the Blessed Mother. Even when family members are busy with active lives, praying the rosary together “is a way for us to stop, to be together and give God thanks and have family time,”

Mr. Wright said. Probably the most important influence on his devotion to the rosary is St. Louis de Montfort’s book, “True Devotion to Mary.” Reported Marian apparitions at Medjugorje got him interested in Mary, but he was “hesitant to give too much to Mary and not put her above Jesus,” he said. The book helped him understand that his prayers to Mary and everything he gives to her go “straight to Jesus.” He learned that not only do they go to Jesus, she presents them to Him as a purified prayer, in a way that he could not present. “Thus, the rosary became my main form of prayer,” he said. Both he and his wife say the rosary individually as well as with their family. Asked if he has a family when he grows up if he will continue the family rosary tradition, Gus, 11, replied, “Yes, because it brings the family closer.” The Wright family also includes Sam, 18, Ethan, 16, Gabe, 13 and Cecilia, 1.