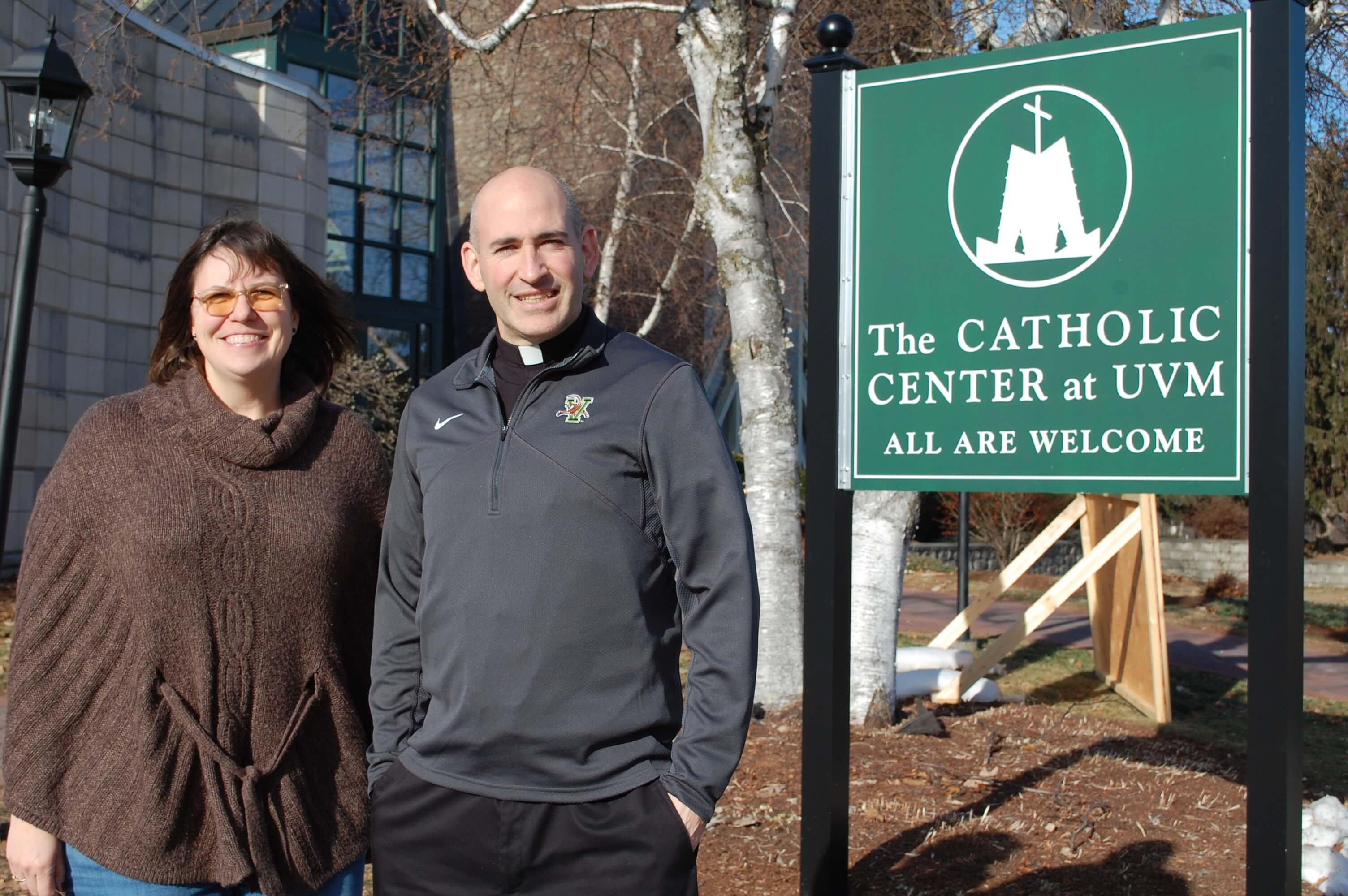 “The Holy Spirit is at work” at the Catholic Center at the University of Vermont in Burlington.

That’s how campus minister Kim Allbee explains the number of people confirmed and baptized there in the last six years and the number of vocations fostered there.

“There’s a hunger and a desire for these students [who attend Mass at and participate in the life of the Catholic Center] to have a relationship with Jesus,” she said.

A look at some of the center’s statistics from the past half dozen years indicates that 51 members of the community there have been confirmed, 36 have been baptized and 20 have received their First communion. In addition, 15 marriages have taken place there, 13 alumni have become FOCUS missionaries, five have entered the seminary and two have become religious sisters. One alumnus is scheduled to be ordained a priest in June.

That man, Deacon Kevin Chalifoux, was a student at the University of Vermont from 2009-2013 and was a regular member of the Catholic Center community during his college career. “The Catholic Center was where I frequented the sacraments, prayed, discerned and formed friendships based upon a mutual life of Christ and His Church,” he said. “It was principally in that chapel where I discerned a call to the priesthood and decided to enter the seminary.”

Indeed, many others have discerned their vocations while involved with the center.

Varun Gopinath, a member of the Class of 2013, was not Catholic when he began frequenting the center at the invitation of a friend. The peace he found with people there helped him in his own conversion to Catholicism in 2013; he received the Sacraments of Baptism, Confirmation and Eucharist that Easter then discerned his vocation.

Though he discerned the priesthood, he is now married and in medical school in Ohio.

“We offer a place for students to come and encounter Jesus in each other and in the sacramental life” of the Church, Allbee said. “They support each other in the journey of faith.”

The Catholic Center is a place for students and other members of the university community to talk, to share their beliefs and values and to be supported in their faith journey. They can relax in the lounge or spend quiet time in the chapel; some participate in providing dinners at the Burlington Salvation Army.

According to Deacon Chalifoux, the Catholic Center as a place where young people can learn healthy habits of life, including study habits as well as an ordered life, marked by time reserved for prayer and worship, time reserved for silence, time reserved for friendly conversation and laughter. “It is of the utmost importance today that we provide for our young people opportunities for leisure and for silence. I was so blessed to discover the riches of healthy and ordered friendships during my years at the Catholic Center and I wish the same for all who frequent that space,” he said.

“The Catholic Center at the University of Vermont provides an opportunity for a faith community on a secular campus,” said Robert Murphy, a UVM alumnus and seminarian for the Diocese of Burlington who prayed and spent free time at the center while a student there. “It is a place to invite those who do not yet know Christ to come have an opportunity to encounter Him and for those who know Christ to come to know Him better. The Catholic Center also makes evangelization at the University of Vermont easier.”

The staff — which undertakes a ministry of presence to all who enter the center — consists of Father Dwight Baker, the executive director, and two full-time campus ministers. There are four full-time FOCUS missionaries, a part-time music director, a part-tome maintenance director and a part-time social media coordinator.

Alumna Hannah Dragonas, who now works as a FOCUS missionary, participated in the Rite of Christian Initiation of Adults at the Catholic Center and received her First Communion and Confirmation in 2015 when she was a sophomore.

Father Baker credits the Diocese with its “wonderful investment” in the Catholic Center, noting that 35 percent of its operating budget comes from the Bishop’s Annual Appeal; 80 percent of the center’s are used directly for ministry.

“The Catholic Center is integral to the ministry and mission of the Diocese of Burlington for a variety of reasons,” Deacon Chalifoux noted. “I must first emphasize the importance of the sacraments that are offered there regularly, and I must especially highlight the importance of regular exposition and benediction of the Most Holy Eucharist as well as the regular hearing of confessions. Those are two necessary components of growth in the spiritual life.”

Among the activities that take place through the Catholic Center are Bible studies, retreats, Masses, barbecues and adoration of the Blessed Sacrament. “It’s is [a] vibrant” place, Father Baker said.

“Our goal is to have our students have an encounter with Jesus Christ and the Church, and we have been creative about it,” he said, noting that the Catholic presence is made known on campus by, for example, staffing tables in busy locations to promote activities and programs.

Lamenting that a campus culture is not always supportive of students trying to live out their faith, Father Baker said students involved in the activities of the Catholic Center are often countercultural.

“The Catholic Center is a necessary beacon of light on a university campus that is full of danger and temptation for the young people studying there,” Deacon Chalifoux said. “The campus environment and culture is not one that often upholds virtue or sanctity and can be a severe trial for the young Catholic. They are in great need of the guiding wisdom of the Church, preserved in Her teaching and sacred tradition, and they certainly need of the grace of God, which He has decreed to come to us through the mediation of the Church’s life and sacraments.”

The Catholic Center changed the course of Dragonas’ life. “Through the center I entered fully into the Church, chose a new career path, and will probably go on to work for the church even after missionary life,” she said. “If it hadn’t been right there between my classes and my dorm, I’m not sure if I would even be Catholic today.”

To support the ministry of the Catholic Center, which also serves Champlain College in Burlington, email catholiccenteruvm@gmail.com or call 802-862-8403.