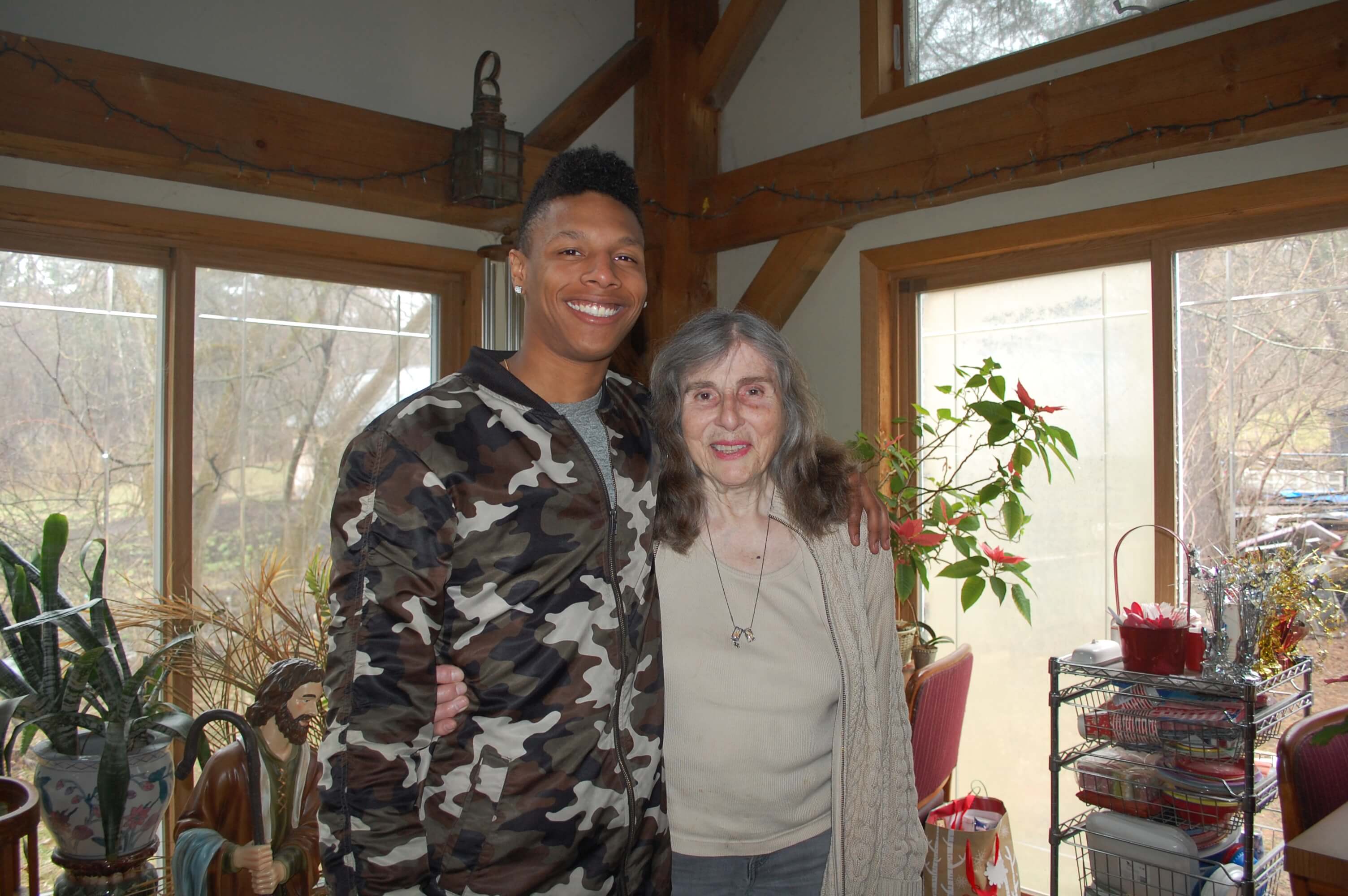 Photo Credit: Vermont Catholic/Cori Fugere Urban - Theresa Tomasi and her son, Trey Tomasi, 20, are at home in their 4,500-square foot Williston home. Three additions have been made to the original home to accommodate the growing Tomasi Family.

Theresa Tomasi always wanted to be the mother of twins.

Though she never married and never gave birth to twins, she does joke that she is the mother of “twin” girls born on March 13, 1994 — one in Pennsylvania and one in Ghana.

Tomasi, of Williston, is their adoptive mother.

In addition to them, she adopted 25 others.

“I never had that privilege” of marrying, said the retired social worker who attends Holy Family St. Lawrence Parish in Essex Junction and St. Stephen Parish in Winooski.

“I always wanted a big family,” said Tomasi, 88, who has a brother who is 90 and one who is 76. Born in Barre, she moved with her family to Burlington when her father went to medical school at the University of Vermont.

Their neighbors had 12 children, and Tomasi occasionally was invited for supper. “Sitting around the table with so many was wonderful,” she said. “In the back of my mind I thought, ‘what a wonderful lifestyle.’ I think they planted the seed” to have a large family.

A graduate of the University of Vermont with a bachelor’s degree in psychology, she attended McGill University in Montreal for a master’s in social work.

So when, in the 1960s, she inquired about adopting and learned Vermont did not then allow single persons to adopt, she turned to Canada from where her first four adopted children came.

Tomasi was living in Williston at the time — in a different house than where she currently lives — and in 1972 she adopted a 14-month-old girl and named her Tracy because she liked the name.

She has given all her children names that begin with “T,” just like her parents gave their three children “T” names (Thomas, Theresa and Timothy).

Her 27 adopted children made her a large international family; in addition to Canada and the United States, they come from Ecuador, Cambodia, India and Bangladesh. They now range in age from 16 to 54.

She adopted her last son 10 years ago when he was six.

Four live with her; two of them are severely disabled so her son, Trey, 20, helps her with them.

Her grown children now live near and far, from Vermont and Maine to Texas, Iowa and California. Among them are a lawyer, a doctor a carpenter, a business owner, a mechanic and an adoption assistant.

Contemplating her adoption of 27 children over the years, Tomasi said with a laugh, “I look back and I wonder how that happened, but it did!”

She added, “It’s wonderful to provide a home for a child that needs a home.”

As the family grew, Tomasi had a house built on 50 acres in Williston, and through the years and after three additions it now has about 4,500 square feet of living space. Two large dining room tables and a smaller one are pushed together in the dining room to seat 11, and scores of cups and mugs are stacked nearby on shelves. A wire rack is loaded with large pots and bowls, and family photos decorate the walls.

It’s a quieter and slower-paced life now with only four of her children living with her full time; the most that lived there at the same time was about a dozen.

“When I look back I think God must have had a really, really strong hand in this,” Tomasi said. “Social workers don’t make a lot of money, but somehow I was able to adopt 27 children. I don’t think it would have happened without God’s help.”

All of her children were baptized and raised Catholic, and she thanks the priests where she attends Mass for their interest and support.

Edmundite Father Charles Ranges, pastor of Holy Family St. Lawrence Parish, said Tomasi has the “heart of Jesus” and offers unconditional love to all her children. “Just being with her, you know that you are in the presence of a saint. Theresa doesn’t have a selfish bone in her body. She has great parenting skills because she treats every one of her children as individuals, and she wants the best for each and every one of them. I see Theresa as a true gift from God.”

Trey said the best part of having so many siblings is having so many role models, but he admits it was a challenge when he was younger and the large family had only one car and one driver.

For Tomasi can be a challenge to make her 27 children all feel loved and special, but as Trey said, she has a “big heart.”