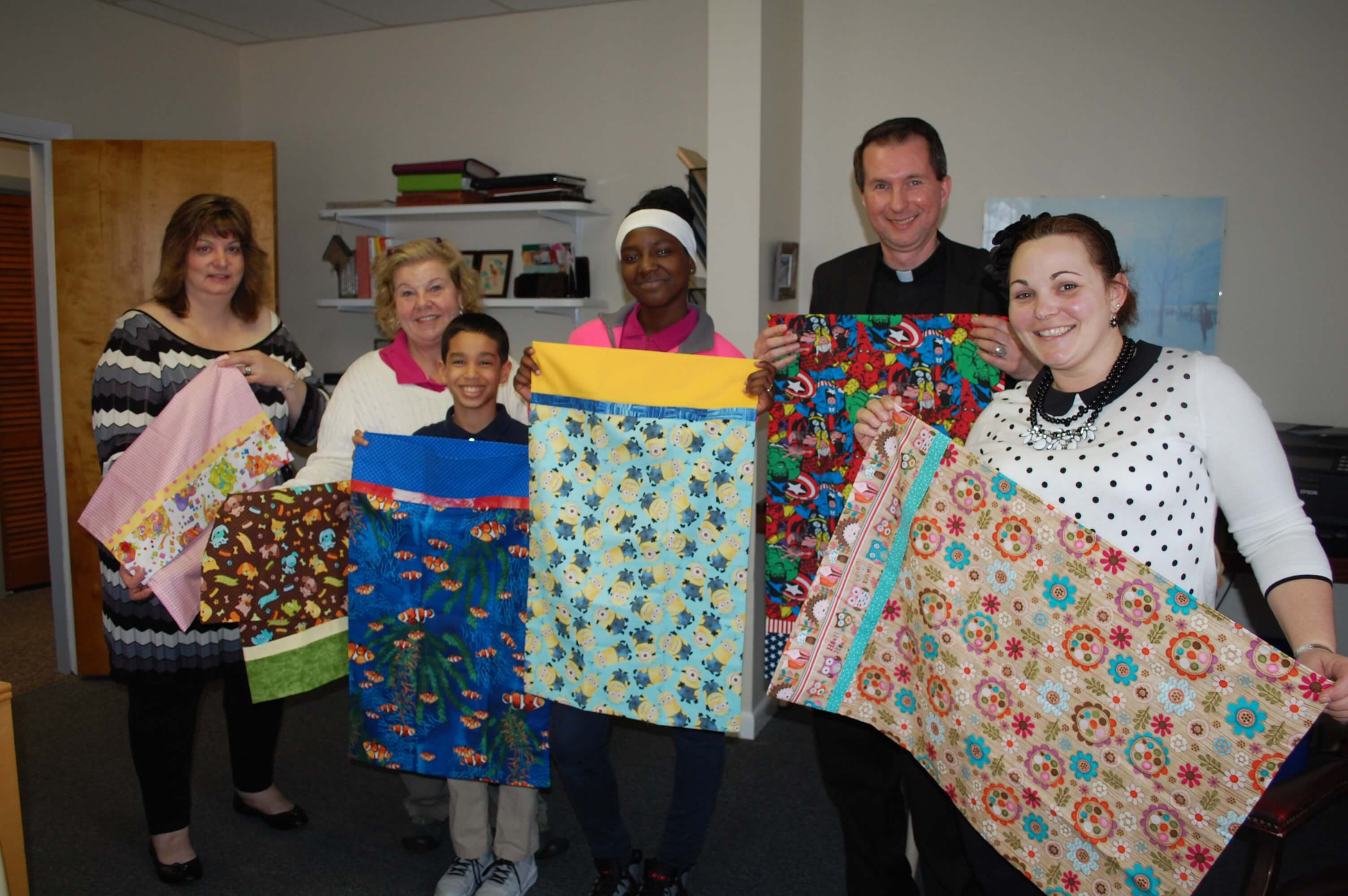 Photo Credit: Vermont Catholic/Cori Fugere Urban - A strong supporter of Kurn Hattin Homes for Children in Westminster, Father Lance Harlow distributes pillowcases collected during one of his projects to benefit children there.

Before Father Lance Harlow decided to enter the priesthood, he worked a radiologic technologist the Medical Center Hospital of Vermont in Burlington and at the Mount Ascutney Hospital in Windsor, his hometown.

“The decision to enter the seminary proceeded from a tortuous process of discovering the ultimate meaning of my life — beyond just a medical career,” said the rector of St. Joseph Cathedral in Burlington.

After about two years of prayer and spiritual direction with the Vermont priest who baptized him, Father Harlow discerned that God was calling him out of healthcare to be a parish priest. “It was a very painful decision because I liked my colleagues very much and the medical work I was doing. However, it did not fulfill my soul because, as good as it was as a profession, it was not my vocation,” he said.

Burlington Bishop Kenneth Angell ordained him at the former Cathedral of the Immaculate Conception in Burlington on May 8, 1993. His assignments have mostly been in parish ministry, though from 1998 to 2000 he worked full time as a hospital chaplain at Fletcher Allen Health Care in Burlington.

Throughout, he has been involved in a host of social ministries.

“A man is ordained a priest for three primary tasks: to preach, to teach and to heal. Involvement with the social ministry allows him to do all three,” Father Harlow said. “When a priest is relegated to a desk, stifled by paperwork, he loses his focus on the meaning of his priesthood. While administrative work is part of being a pastor, it can become all-consuming and needs to be balanced with the pastoral art of working with people and living a sacrificial life.”

Throughout the 25 years of his priesthood, Father Harlow has collaborated with a variety of social ministries including food shelves and being a co-founder of the Kingdom Community Shelter in St. Johnsbury. He served lunches to the poor and found “great value in wearing priestly attire in working with the poor because of the immediate identification with religion.”

For many years he has been involved with the Kurn Hattin Homes for Children in Westminster, which cares for children whose families who cannot take care of their children for a variety of socio-economic and personal reasons. In 2017, he received from the school the Reverend Charles Albert Dickinson award for “outstanding contributions to the field of child welfare and commitment to transforming the lives of children and their families.”

At the cathedral, Father Harlow serves as the executive director of Joseph’s House, an apostolate to the poor in downtown Burlington and surrounding towns. The parish also has begun a new relationship with Spectrum Youth and Family Services, cooperating in the running of a temporary shelter for homeless youth at the St. Joseph Cathedral parish hall between November and April.

“Evangelization has also been a fundamental theme throughout my priesthood,” Father Harlow said. He has spoken at several conferences, made a CD for Lighthouse Communications and written books on Marian devotion. He appeared on Living the Abundant Life on EWTN and produced two public access TV evangelization programs — one in Bethel and one in Bellows Falls. He is currently doing videos for Facebook to promote the St. Nicholas Project, which connects Catholics with the charitable works of Kurn Hattin; and he is considering a YouTube channel for the same purpose.

Another of his social ministries has been the public healing services, which are conducted monthly at St. Joseph Cathedral and at other locations including LaSalette Shrine in Enfield, New Hampshire.

“The only way for a priest to be successful in working with the poor is to spend a lot of time before the Blessed Sacrament in silent prayer,” Father Harlow said. “There he will gain courage, wisdom and a sensitive heart to step out of his comfort zone. But there also, the Lord will speak to his heart and open up opportunities for him to encounter the poor.”

Working with the poor is challenging, he acknowledged, saying: “One’s idealism becomes quickly tempered by actual experience. Those experiences will force the priest to recognize that his service to the poor is actually service to the suffering Jesus. That is why adoration of the Blessed Sacrament is essential. It helps purify the spiritual eyes of the soul to see Jesus in the distressed men and women. And, when they cause us pain by their words and actions, we must return to the Blessed Sacrament to have Jesus heal our emotional wounds and frustration.”

Offering his general thought on the priesthood, Father Harlow emphasized that a priestly vocation is one of total surrender to Jesus. “If a man is considering a vocation to the priesthood because he sees in it the fulfillment of his life’s meaning and purpose, then he will be very happy. To see the priesthood as something less than a total sacrifice, will cause a man to be disillusioned over time.”