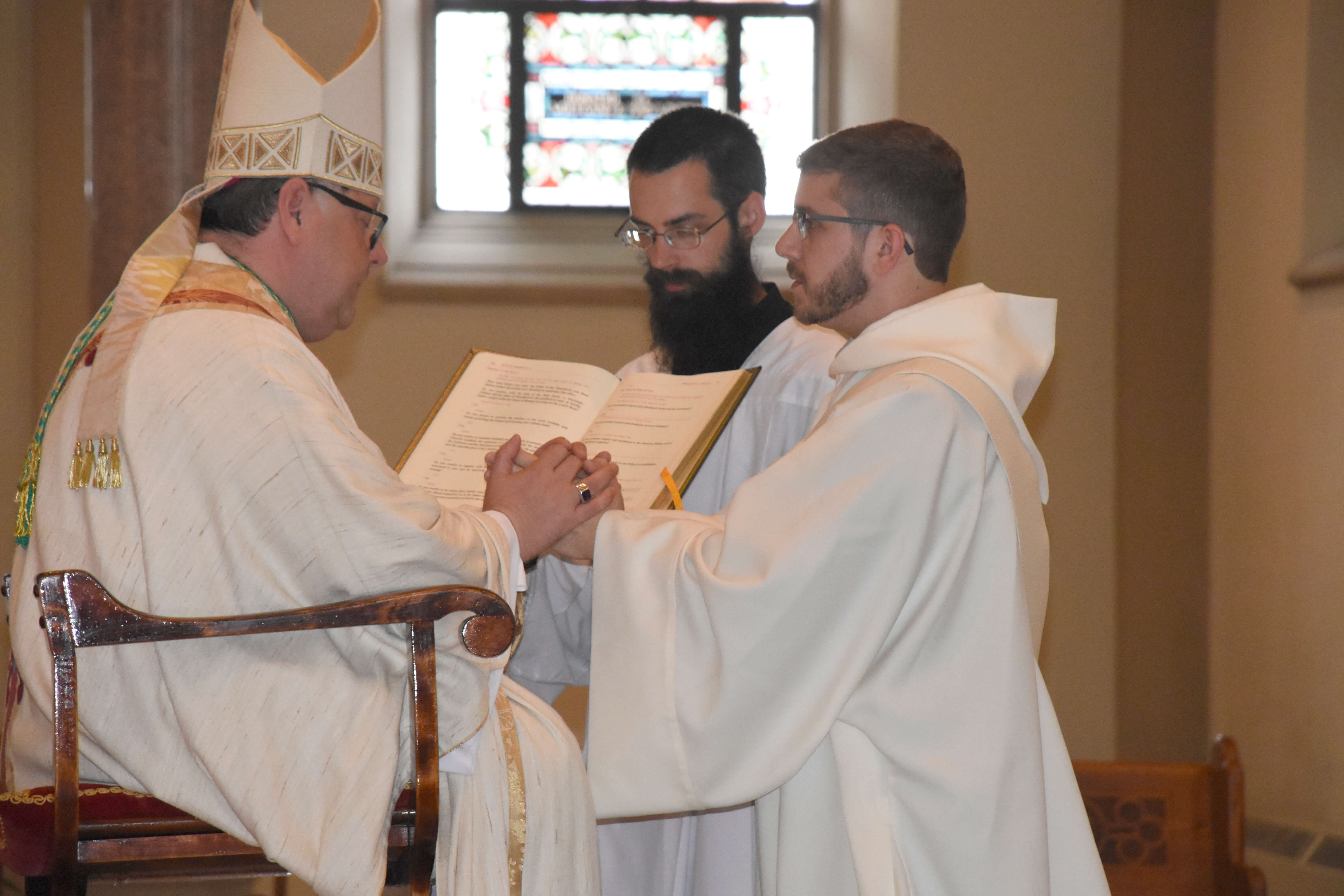 Since entering monastic life in 2011, St. Albans native Shawn Machia worked in St. Vincent College Campus Ministry, studied in seminary, worked as a physics lab assistant, worked in the college planetarium, developed shows and give public presentations, worked on developing a small maple sugaring operation on St. Vincent’s campus in collaboration with the Winnie Palmer Nature Reserve and the college and sang in the St. Vincent Camerata as well as being responsible for various assignments and duties in the house as a monk.

But most notably, he was ordained to the priesthood.

Now known as Benedictine Father Lawrence Machia, he was ordained May 19 at St. Vincent Archabbey Basilica by Bishop Edward Malesic of the Diocese of Greensburg, Pennsylvania.

His priestly assignments are various missions and as needed both on and off campus, but he is primarily continuing as a physics student. He plans next to go on to graduate studies so he can return and teach astronomy and physics at the college. He is particularly interested in planetarium show production and public speaking, with special interest in the dialogue between faith and reason/science.

The son of Keith and Louise Machia, Father Machia, 32, attended Nativity of Blessed Virgin Mary/St. Louis Parish in Swanton and Highgate. He earned a bachelor’s degree in theological studies from Eastern University and a master of divinity and master’s in systematic theology from St. Vincent Seminary.

He first began discerning a call to the priesthood while an undergraduate student at Eastern. “The study of theology as an academic discipline initially attracted me to the idea of a life dedicated to the Church,” he said. “I did not at the time even realize it was possible to study religion on such a level. I wrestled with the idea of celibacy but simultaneously felt drawn to life in community and consecrated service to the Church. I wanted my life to ‘be Church,’ whatever that meant at that time in my life.”

His friends and mentors were instrumental in helping him discern his vocation, particularly by helping him identify his gifts and encouraging him in the “regular and ordinary pursuit of holiness,” which is integral to any vocation.

He chose St. Vincent Archabbey because it was a good fit with everything he desired most in life: “As I like to say, St. Vincent is everything I ever wanted out of life, all in one place.”

The ideals of monastic life describe the kind of man he wants to be — attentive to the voice and presence of God, loving, reflective, wise, prudent, disciplined and creative.

“A monk is a person who has learned how to stop imposing himself on the world around him and instead can receive reality on its own terms; he is at all times aware of God’s presence around him and where God is, there is an infinite density of potential and meaning, and every moment can be a moment of indescribable beauty,” Father Machia said.

And he appreciates living in community. The unique people, traditions and history that make up St. Vincent are all part of his vocation. “I love the sheer variety of possibilities and outlets for gifts and talents that exist in this place,” he said. “I like to call it a sandbox where you can build almost anything. I love the loving and affirming community we have.”

His advice for young men discerning the priesthood is to pray every day and surround themselves with good Catholic friends and mentors. “God has never let me down and has worked the greatest graces in my life through the people who surround me,” he said. “Trust Him and try not to be afraid. He will heal whatever wounds you have and give you whatever you need to accomplish His will for you.  Finding your vocation is like arriving home, where you’ve always belonged.”