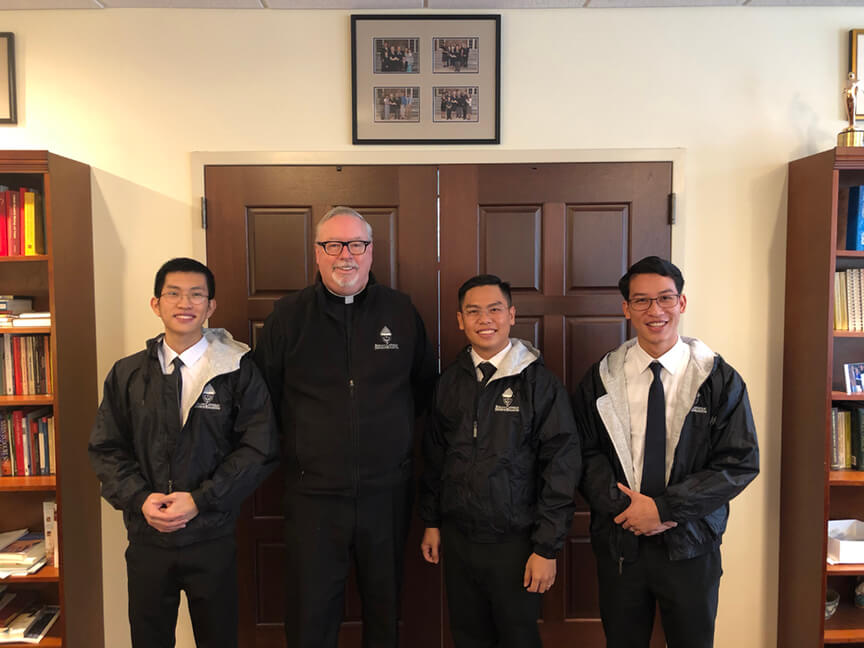 The new seminarians are Khoa Nguyen, An Dinh and Loc Vo.

They currently are living at St. John Seminary in Brighton, Massachusetts, and studying English at Boston University.

The Diocese covers the cost of tuition, room and board and other miscellaneous expenses during their time of formation.

“God-willing, and upon successful completion of their formation, they will be ordained priests of the Diocese of Burlington and serve in Vermont for the rest of their lives,” Father Dodson said.

An was born in 1995 and has one younger sister. He graduated from Lac Hong University with a bachelor’s degree in software engineering in 2018. While in Vietnam, he served in parishes as a catechist, altar server, cantor and volunteer in hospitals and shelters for the less fortunate.

Loc was born in 1994. He is the youngest in his family, which includes four older brothers and three older sisters. He graduated from Hue University in 2017 with a bachelor’s degree in literature. While in Vietnam, he was a vocational team leader of a group of Catholic students studying in Hue while serving Mass and teaching catechism.

Khoa was born in 1994 and has two younger sisters. He graduated from Medicine and Pharmacy University in Saigon with a bachelor’s degree in medicine in 2017. He worked in a children’s hospital in Vietnam for one year before coming to the United States in 2018 to study English at Holy Apostles Seminary in Cromwell, Connecticut.

“There is an abundance of seminarians in Vietnam and a need for more seminarians and priests in the United States,” Father Dodson said. “It is in light of this reality that An, Loc and Khoa discerned God’s call and have come to Vermont as the first step in answering His call.”

The commitment to faith and family in Vietnam is strong, he noted: “The Vietnamese seminarians bring with them this lived experience, which can help to inspire, reignite and recapture a fervor for the faith in our families throughout the Diocese.”

The Diocese already had two seminarians from Vietnam, Luan Tran and Giang Vu; both are in their second year of pre-theology studying at St. Meinrad Seminary in Meinrad, Indiana.

“Please keep An, Loc and Khoa and all our diocesan seminarians in your daily prayers as together we pray for an increase in vocations throughout the Diocese of Burlington,” Father Dodson said.