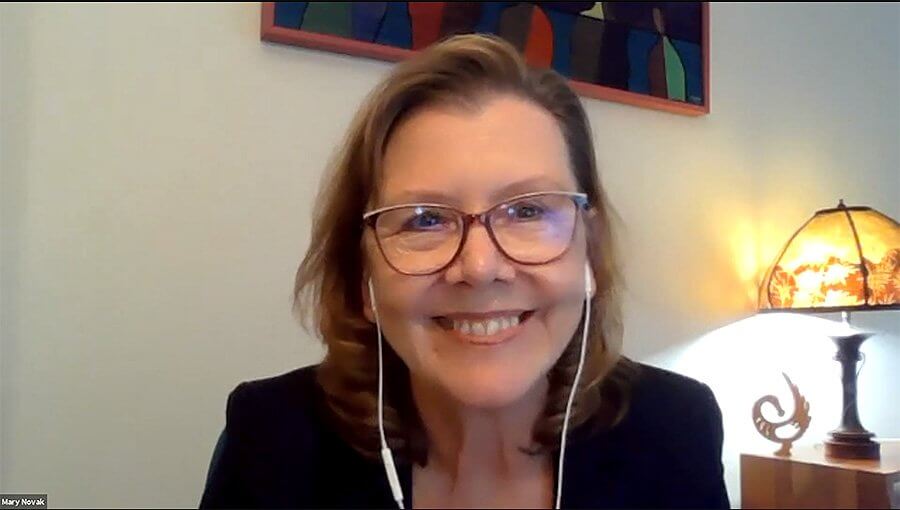 Photo Credit: CNS/courtesy Network - Mary Novak, executive director of Network, participates in an Oct. 26 webinar called "The Pope and President: What to Watch and What's at Stake."

Ahead of President Joe Biden’s Oct. 29 meeting with Pope Francis, panelists in a webinar offered mostly praise for Biden’s sincerity and what they said is his commitment to his Catholic faith.

“We believe President Biden treats his vocation as a sacred one,” said Mary Novak, executive director of Network, a Catholic social justice organization.

Biden and the pope both “lead with a very clear conviction that solidarity is essential to our faith,” she said during the Oct. 26 event.

In announcing the webinar, a Network news release called the meeting of the two leaders “an important inflection point for global and U.S. politics.”

The White House has indicated that discussion topics for Biden and the pope in their private meeting at the Vatican are likely to include climate change, income inequality and migration.

Webinar participants highlighted these same issues as those they hoped the two leaders would discuss.

Whether the issue of abortion will come up is not known; Biden as a Catholic supports legal abortion, while Church teaching upholds the sanctity of human life from conception to natural death.

Bishop John Stowe of Lexington, Kentucky, said during the webinar that he hoped the pope could challenge Biden “on some of the issues on the border,” including Title 42, a provision of the public health law enforced during the Trump administration that allows expulsions at the border because of public health concerns over Covid-19.

In the face of heavy criticism from immigration advocates, Biden has kept Title 42 in place, and the courts so far have allowed it.

Since Biden’s slogan for rebuilding infrastructure is “Build Back Better,” which means “seeking the common good,” Novak said, she hoped the administration would “restore the commitment to asylum.”

Diane Orces, a research associate at the Public Religion Research Institute, talked about polling data, indicating there is broad Catholic support for beneficiaries of the Deferred Action for Childhood Arrivals program, which protects young adults brought to the U.S. illegally as children from being deported.

DACA was started by President Barack Obama through executive order in 2012. It currently protects about 700,000 young people, but a Texas judge issued a ruling July 16, 2021, partially ending the program. Current beneficiaries can renew their status but new applications are currently not being accepted.

Orces also said polling data showed Catholics are hostile to a wall on the southern border to stop migrants from crossing into the United States illegally.

The webinar was sponsored by the Center for American Progress, a nonpartisan research institute based in Washington.

Meanwhile, other groups also outline issues they hope Biden and the pope will discuss.

Many Catholics are looking for them to discuss “the next step to address the U.S. death penalty,” according to a Catholic Mobilizing Network news release.

“By commuting the sentences of the 45 men on the federal death row, President Biden has the power to save lives with the stroke of a pen,” Krisanne Vaillancourt Murphy, the organization’s executive director, said in an Oct. 26 statement issued with the release.

“It is hard to think of anyone more persuasive than Pope Francis to make that point to Biden,” she said.

During his 2015 visit to the U.S., Pope Francis called for a “global abolition of the death penalty” in an address before the U.S. Congress.

Under Biden, the Department of Justice ordered a temporary moratorium on federal executions following “an unprecedented spate of executions by the Trump administration, which interrupted a 17-year halt in use of the federal death penalty,” the Catholic Mobilizing Network release said.

Said Vaillancourt Murphy, “President Biden is the first sitting president to openly oppose capital punishment (but) more needs to be done. With this week’s visit to Rome, Pope Francis has an opportunity to remind the president of their shared goal to end the death penalty.”

“A personal appeal from Pope Francis to commute the federal death row,” she added, “could go a long way to encourage Biden to take this next step on this issue and to uphold the sanctity of life.”

On Oct. 27, the Catholic Climate Covenant announced it began delivering to the Biden administration, the Vatican and U.S. congressional leadership thousands of signatures on a petition “making faith-filled appeals for climate solutions.”

The petition has some 200 endorsements so far by U.S. Catholic partners and institutions, including archdioceses, dioceses and parishes who signed the petition, it said.

After Biden meets with Pope Francis, he heads to Glasgow, Scotland, for the 26th U.N. Climate Change Conference. The coalition’s petition and an accompanying letter to Biden and other U.S. leaders asked for “ambitious national solutions for the common good that address the sources and threats of the climate crisis.”

“As Catholic institutions, organizations, communities and individuals in the United States, we recognize global climate change as an urgent moral issue that threatens the life and dignity of present and future generations,” said the letter. “(It) adds to the hardships already experienced by the poorest and most vulnerable people domestically and abroad, and degrades earth, our common home.”

“U.S. and global leadership and ambition are critical if humanity is to limit warming to 1.5 degrees Celsius to avoid the worst impacts of climate change,” it said.

—Julie Asher contributed to this story.