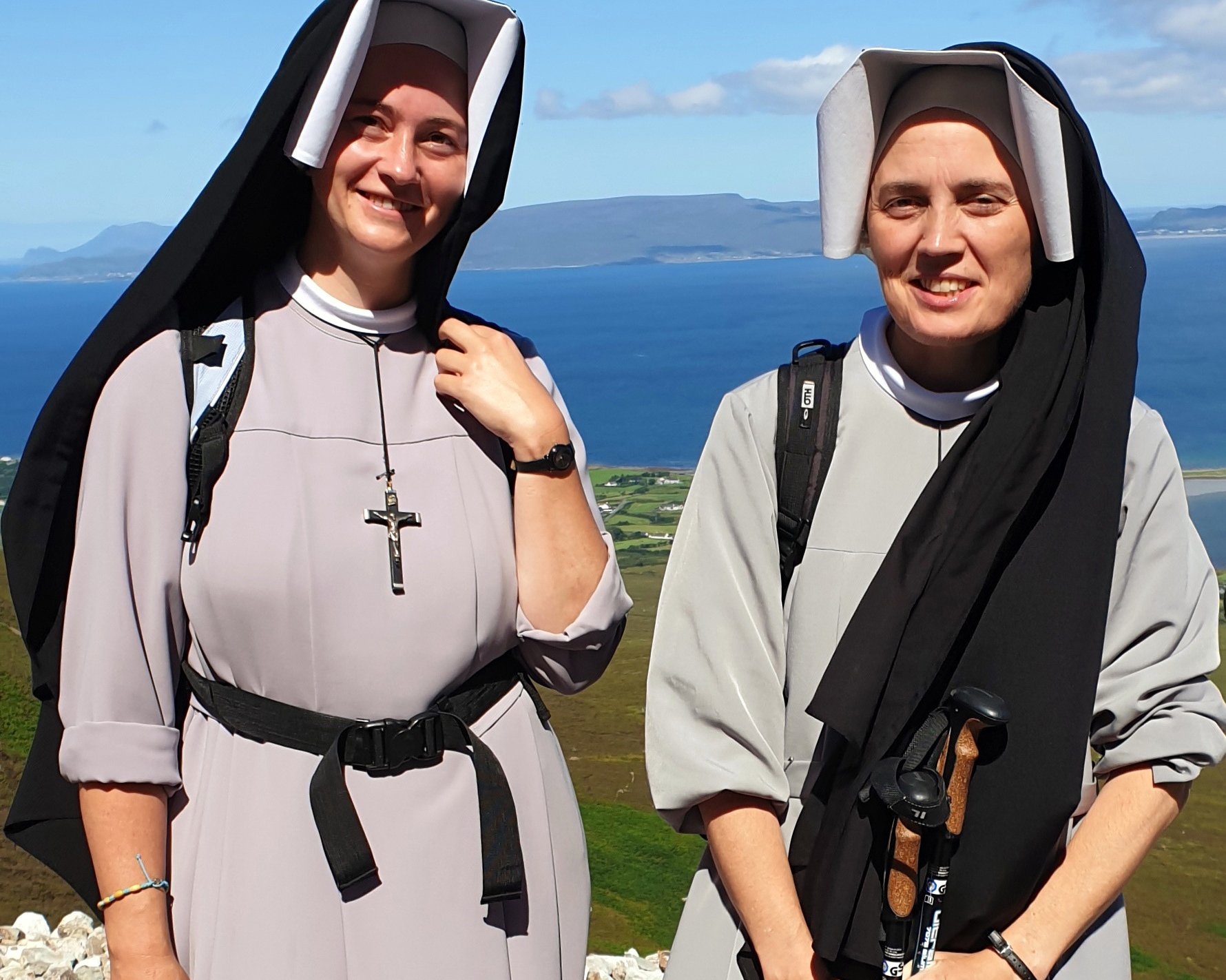 Photo Credit: CNS/Sarah Mac Donald - Sisters Augustina Matusik from Poland and Mary Claire Kenneally from Inagh, Ireland, members of the Congregation of Our Lady of Mercy, pose during a pilgrimage on Ireland's Croagh Patrick July 31. They joined the thousands in the first Reek Sunday climb of Croagh Patrick since the pandemic hit.

Thousands of pilgrims hiked up Ireland’s holiest mountain for the annual Reek Sunday pilgrimage, held for the first time since the Covid-19 pandemic hit.

The pilgrimage traditionally is held the last Sunday of July, but it was postponed in 2020 and 2021 over concerns that Covid-19 would spread among more than 20,000 people who climb the mountain’s narrow pathway on that day.

The name “Croagh Patrick” comes from the Irish/Gaelic “Cruach Phádraig,” meaning “Patrick’s Stack.” The mountain is known locally as the Reek, from the word stack.

On July 31, Mass was celebrated on the summit every hour from 8 a.m. to 2 p.m. for pilgrims from Ireland and beyond who made the more than 4-mile ascent up the 2,500-foot-high mountain. At the 10 a.m. Mass in Gaelic, Bishop Fintan Monahan of Killaloe prayed for road safety after a recent spike in fatalities on Irish roads. Priests also heard confessions.

In his homily at St. Mary’s Church in Westport, about five miles from Croagh Patrick, Archbishop Francis Duffy of Tuam reminded parishioners that the origins of Reek Sunday lie with St. Patrick, “the apostle of the Irish” who played a central role in helping to spread the Christian faith on the island.

St. Patrick’s fast for 40 days on Croagh Patrick in A.D. 441, he said, was reminiscent of Moses’ 40 days on Mount Sinai, where he received the Ten Commandments from God.

“Pilgrims come here, retracing St. Patrick’s steps, this weekend and throughout the year, for a variety of reasons, each pilgrim knows his or her own (reason).”

“Mountains, and one as majestic as this, prompt us to seek a bigger picture. Whether we are at the summit or on the lowlands, this towering piece of earth and rock ushers in thoughts of perspective, things seem different, a new view of a changing landscape,” the archbishop said.

Two members of the Congregation of Our Lady of Mercy, Sisters Augustina Matusik of Poland and Mary Claire Kenneally of Inagh in County Clare, were among the pilgrims undertaking the pilgrimage this year.

Both were in Ireland on vacation ahead of Sister Kenneally’s return to Boston after a year in Italy. It was Sister Matusik’s first time in Ireland. Both sisters made the climb in their habits, which drew some reaction from other pilgrims.

“People do look at us because there aren’t too many nuns in habits — climbing mountains! It brings them a lot of joy to see religious sisters in their habit,” Sister Kenneally told CNS.

Close to the statue of St. Patrick that welcomes pilgrims at the base of the mountain trail, Breda Tumelty of the Legion of Mary in Westport offered pilgrims a gift of a miraculous medal “to keep them safe.”

“Our Lady promised her special protection and many graces and blessings to all who wear the medal. So we give people the medal and let Our Lady work after that,” she explained.

Tumelty said Reek Sunday is one of the biggest events of the year for local Catholic organizations. Some pilgrims include “rounding rituals” in their climb; this involves praying while walking clockwise around features on the mountain. Another ritual is climbing barefoot.

Micheál Ó Gallachóir of Ardee did the climb over sharp rocks in his bare feet. Asked why, he responded: “As an act of penance — it is no good if I am not getting any pain out of it. It hasn’t been too bad. This is probably my 10th time doing it in my feet, and I’ve never got a cut — maybe a little blister.”

He said he was commemorating his grandfather, who was arrested on Croagh Patrick 100 years ago during the Irish Civil War. He also explained that his son was born at the start of the pandemic. “I bring him to Mass every Sunday, and I would love to bring him on this pilgrimage one day.”