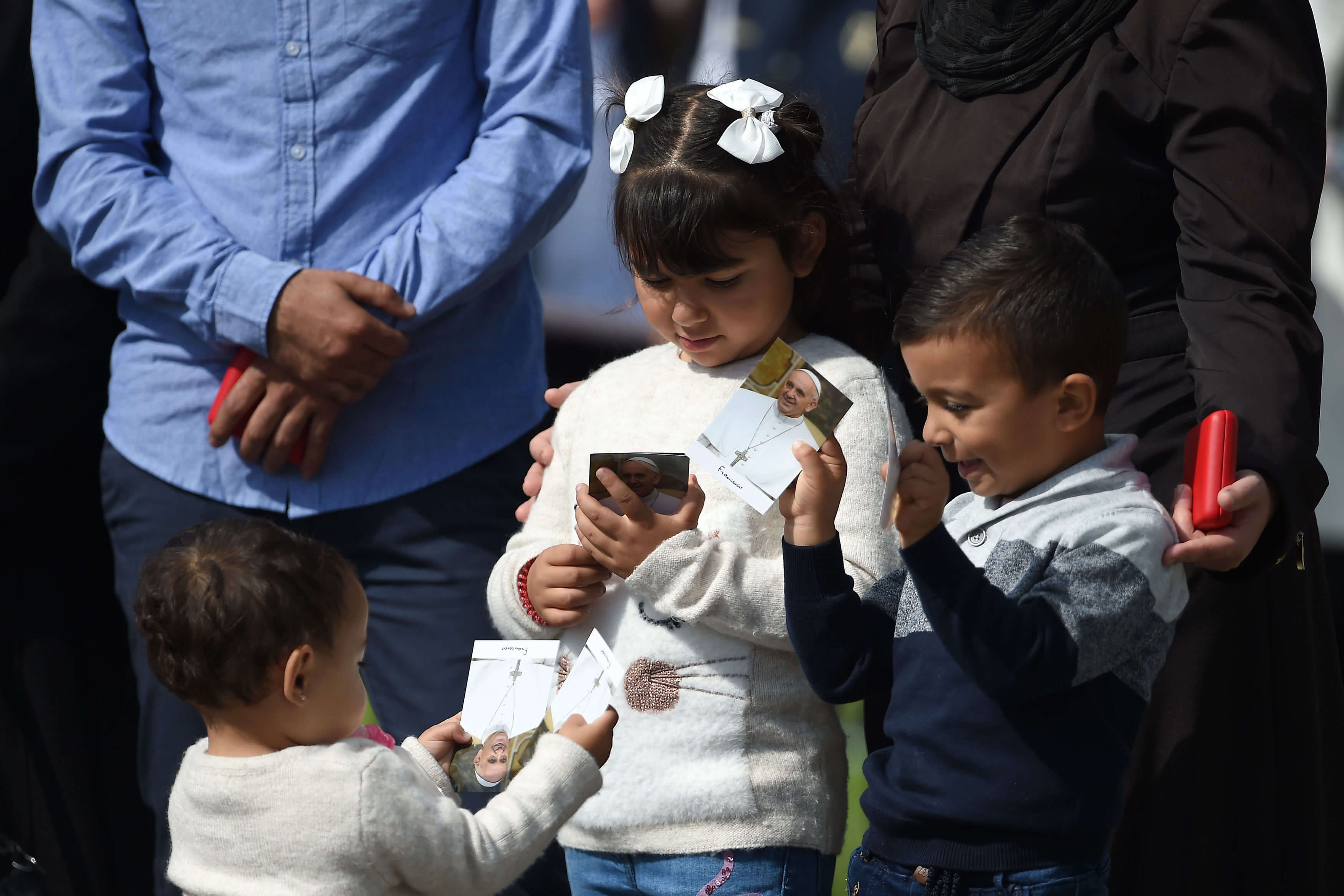 Photo Credit: CNS/Joe Giddens, Reuters - Young Syrian refugees hold photos of Pope Francis during his visit to meet Irish President Michael Higgins in Dublin last year. Ireland's Catholic bishops have criticized the use of intolerant language when it comes to discussions around migration and refugees.

Ireland’s Catholic bishops have criticized the use of intolerant language when it comes to discussions around migration and refugees.

Their remarks were made against a backdrop of recent public protests against the housing of asylum-seekers in towns and villages throughout the country and a divisive election campaign in which a number of candidates were accused of using racist language.

In a statement following their winter general meeting, the Irish bishops’ conference said participants had “discussed with concern the use of intolerant language in public and political discourse as well as the growing hostility toward migrants and refugees coming to Ireland.”

They reminded parishioners that “Christians, in their language and actions, are asked to lead by example and to welcome the stranger” and warned that “any form of xenophobia is opposed to Christianity.”

Ireland has increasingly become a destination for migrants fleeing war and those in search of a better life as Europe struggles to come to terms with a wave of migration.

On Nov. 22, 16 migrants were found concealed in a truck on board a ferry from France to Ireland after a worker heard noises. All were found to be healthy and were later received by Ireland’s national integration agency.

Irishmen were among those arrested and charged after 39 migrants from Vietnam were found dead after suffocating in the back of an Irish-registered container in Britain in late October.

In early December, Archbishop Diarmuid Martin of Dublin criticized what he called “a new language of racism.” He said he was “horrified to find traces of such racism among believers.”

“The terms ‘refugee’ and ‘asylum-seeker’ should only arouse heartfelt concern in the Christian heart,” the archbishop said.

In their Dec. 4 statement, the bishops called on “all Catholic parishes and communities to welcome and assist refugees in their local areas in light of the Gospel message.”

They urged “Catholic communities who are able to be more proactive in terms of practically assisting with the accommodation and integration of refugees” to do so. Last year has seen fires — being treated by police as arson — at a number of properties around Ireland earmarked to house asylum-seekers.

Compared to other member states of the European Union, claims for asylum are relatively uncommon in Ireland largely due to the country’s isolation as an island. Last year, for example, 3,673 claims for international protection were received while 1,034 people were granted refugee status.