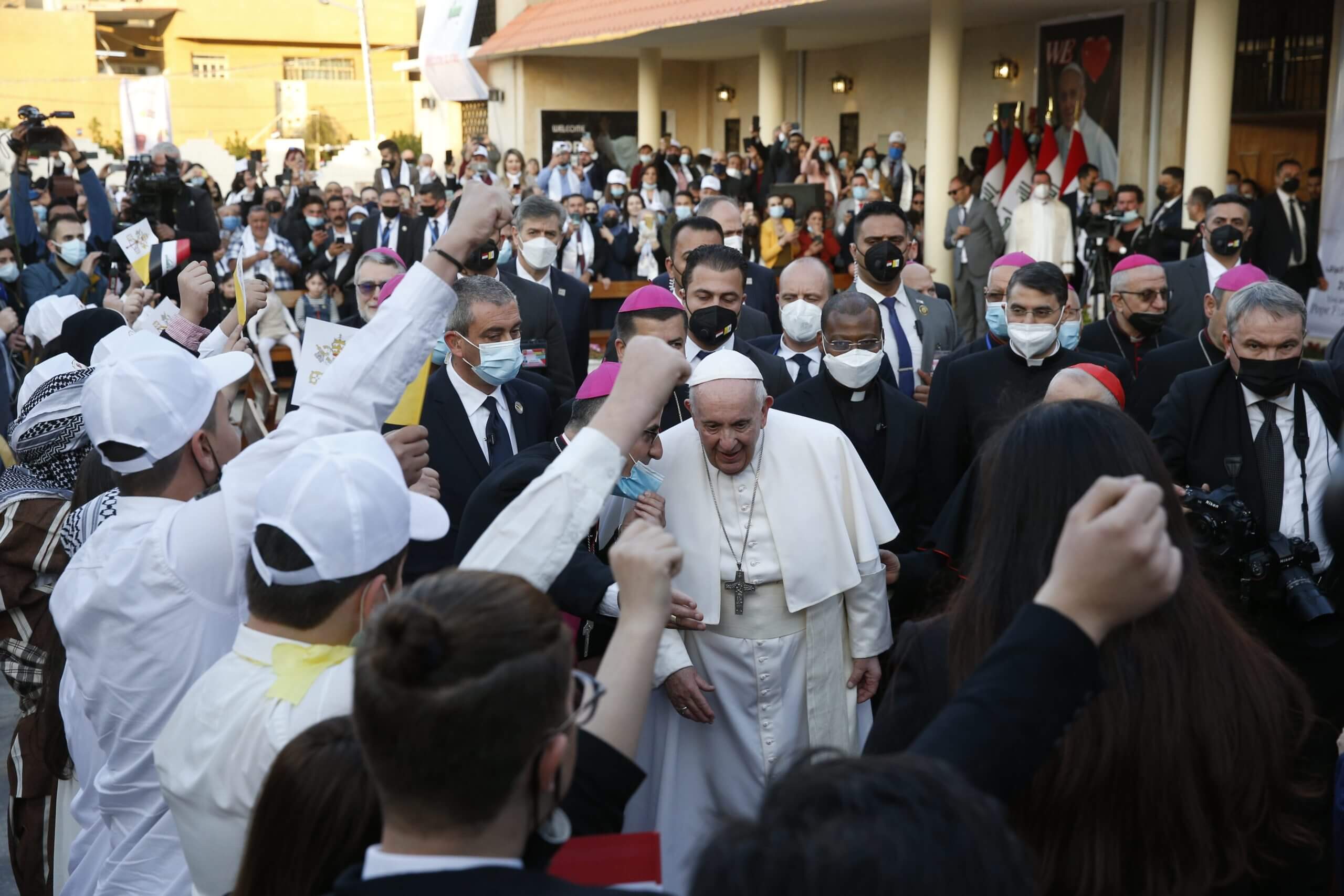 Living the beatitudes can change the world, pope says in Iraq

Pope Francis told Iraqi Christians that when they suffer discrimination, persecution or war, the eight Beatitudes are addressed to them.

“Whatever the world takes from us is nothing compared to the tender and patient love with which the Lord fulfills his promises,” the pope told the congregation sitting inside and outside the Chaldean Catholic Cathedral of St. Joseph March 6.

“Dear sister, dear brother, perhaps when you look at your hands, they seem empty, perhaps you feel disheartened and unsatisfied by life,” he said in his homily. “If so, do not be afraid: The beatitudes are for you — for you who are afflicted, who hunger and thirst for justice, who are persecuted. The Lord promises you that your name is written on his heart, written in heaven!”

According to the Vatican, the service marked the first time Pope Francis celebrated a eucharistic liturgy, “the Holy Qurbana,” in the rite of the Chaldean Church. While the pope recited the prayers in Italian, Cardinal Louis Sako, the Chaldean patriarch, and members of the congregation prayed in Chaldean, a modern form of Aramaic. The Bible readings were in Arabic.

Iraqi President Barham Salih and Foreign Minister Fuad Hussein attended the liturgy, which included a prayer for government officials, asking God to help them be “examples of honesty for the common good” and “know how to collaborate for a renewed world in which liberty and harmony reign.”

One of the prayers of the faithful, recited in Arabic, echoed the pope’s homily. “Benevolent Father, sustain your holy church with the strength of the Spirit so that it would courageously witness to Christ and would be for our country a sign of reconciliation and solidarity among all the children of Abraham, our father in faith.”

In his homily, Pope Francis told the people that while “in the eyes of the world, those with less are discarded, while those with more are privileged,” it is not that way with God, which Jesus made clear in the beatitudes.

Jesus overturned the worldly order of things, he said. “It is no longer the rich that are great, but the poor in spirit; not those who can impose their will on others, but those who are gentle with all; not those acclaimed by the crowds, but those who show mercy to their brother and sisters.”

“The poor, those who mourn, the persecuted are all called blessed,” he said, not the rich and powerful.

The beatitudes “do not ask us to do extraordinary things, feats beyond our abilities,” the pope said. But “they ask for daily witness.”

“The blessed are those who live meekly, who show mercy wherever they happen to be, who are pure of heart wherever they live,” he said.

The beatitudes are not a call for a moment of heroics, but about imitating Jesus each day, Pope Francis said. “That is how the world is changed: not by power and might, but by the beatitudes.”

The Mass was the final public event of a day that saw Pope Francis travel to Najaf, a center of spiritual and political power for Iraqi Shiite Muslims, and then to Ur, the birthplace of Abraham, about 10 miles outside of Nasiriyah. On March 7 he traveled to Iraq’s Kurdistan region, where he visited Irbil, Mosul and Qaraqosh, cities devastated under the Islamic State group’s rule.