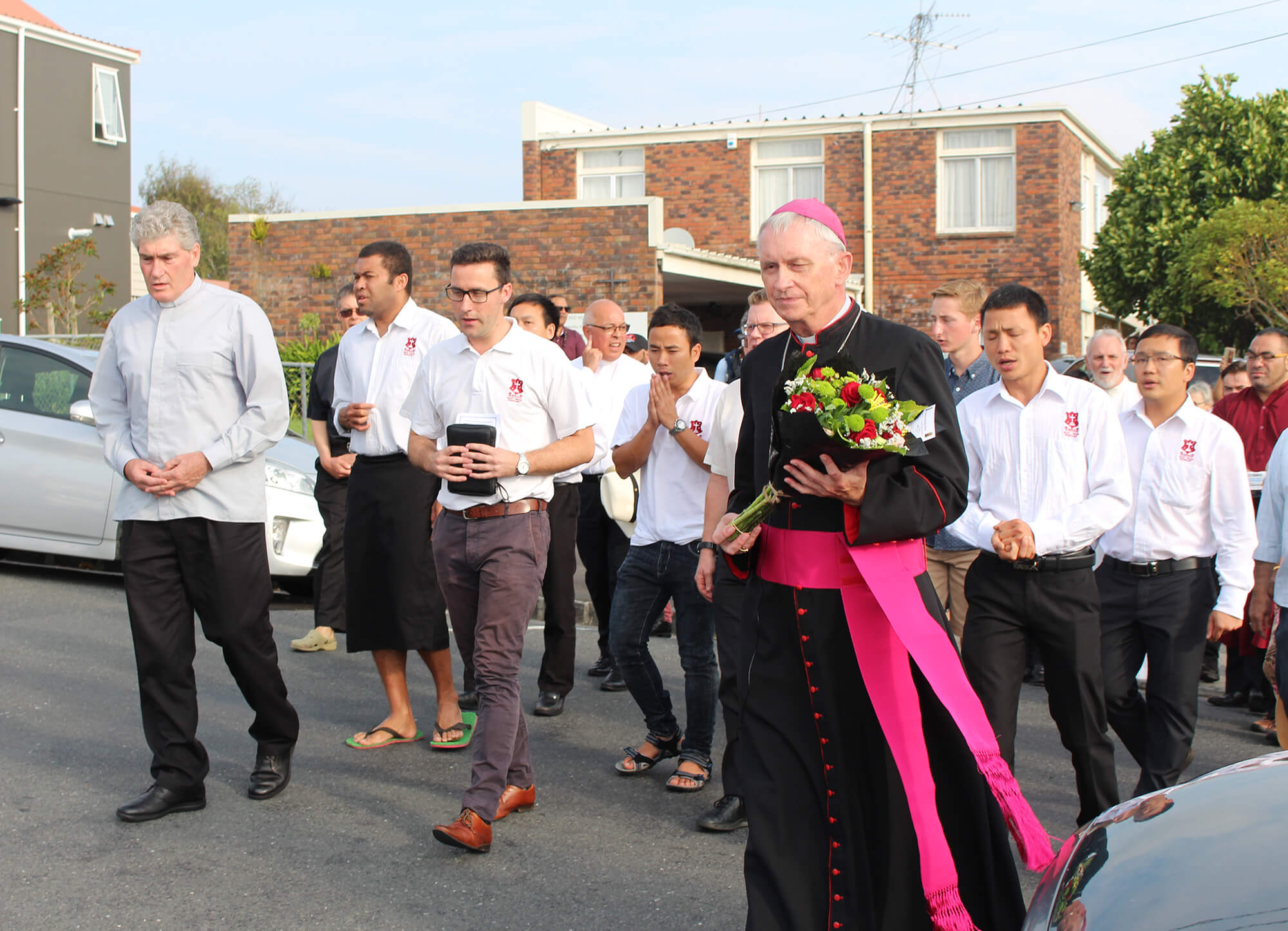 ‘Our only hope is in God’: New Zealanders gather to pray after shooting

Tears flowed during a Mass for peace at St. Mary’s Pro-Cathedral in Christchurch, New Zealand, March 16, one day after a terrorist attacked two mosques, leaving at least 50 people dead and dozens more injured.

“When a family member dies, we feel deep grief and loss,” said Christchurch Bishop Paul Martin. “Such grief is raw and real, and words are completely inadequate.

“Today is such a day,” he told the packed pro-cathedral. “We are unable to express the confusion and pain we feel. Our grief threatens to overwhelm our community at the tragic loss of our sisters and brothers and the act of hate that has been inflicted.

Across New Zealand and throughout the world, people gathered to pray for victims of the March 15 attacks. Accused shooter Brenton Tarrant appeared in Christchurch District Court March 16, charged with one count of murder. More charges are expected. He is to reappear in court on April 5.

Sancta Maria Parish in Christchurch is less than two miles from the Al Noor Mosque at which 41 people were killed. Marist Father Peter Head told NZ Catholic March 17, “You could sense the atmosphere at our Masses today was very different.”

“Some of our parishioners knew some of those who were in the mosque,” he said.

There was more silence than usual during the Mass, the penitential rite took longer, with pauses between each invocation, and the homily was directed toward the attacks. At the end of the homily, everyone prayed the prayer of St Francis of Assisi. There were special prayers of intercession, and the eucharistic prayer for reconciliation was used.

At a Mass Father Head celebrated at the Carmelite monastery in Christchurch the day after the shootings, two of the altar servers, who attend Cashmere High School, told him that “three from their school are among the list of those who are missing.”

In Auckland, Sacred Heart Catholic Church is directly across the road from the Al-Jamie Mosque. The two communities have been good neighbors for many years, with Muslims using Catholic parking lots when they attend Friday prayers.

On March 17, in an overflowing Sacred Heart Church, people of many faiths gathered to show solidarity with the local Muslim community. But in light of the events two days before, armed police were stationed outside the church.

Bishop Patrick Dunn started by welcoming “our Muslim brothers and sisters — we want you to know that we love you, we care for you, we treasure you as fellow citizens and brothers and sisters in Aotearoa New Zealand.” But the bishop also referred to the “horrific and cowardly” attack in Christchurch, which has made this country “a land of heartbreak.”

Bishop Dunn read a message from Pope Francis. The bishop also prayed for those injured in Christchurch, those who died and those who had lost loved ones.

Ikhlaq Kashkari of the New Zealand Muslim Association told the congregation he had received thousands of emails, phone message and texts, all expressing support in some way. He had not been able to answer most, but he appreciated their being sent.

“I don’t have any words to express the gratitude and thanks for all we have received from all walks of life in New Zealand,” he said. He added that people who wanted to promote hatred and division, such as the Christchurch shooter, had only succeeded in bringing the communities closer together.

Ayyub Bhikoo, an official of Al Jamie Mosque, said the Muslim community is vigilant about detecting and rooting out any shoots of hate-filled radicalism that might attempt to emerge in their communities in this country. Some years ago, local Muslim authorities closed an Auckland mosque at which hatred was being preached, he added.

Bhikoo said the people who have gathered outside the mosque since the killings have touched his heart.

“I saw a wonderful, wonderful people,” he said.

At the end of the service, people sang several verses of the national anthem “God Defend New Zealand,” then the Muslim community led people across the street to the mosque, at which men and women were hosted in different rooms.

The attacks “affected all of us deeply,” Bishop Dunn told his Muslim hosts, “but we cannot even begin to imagine how deeply it has affected you and your community.”

“I would like to stress once again our love and our respect for you.”