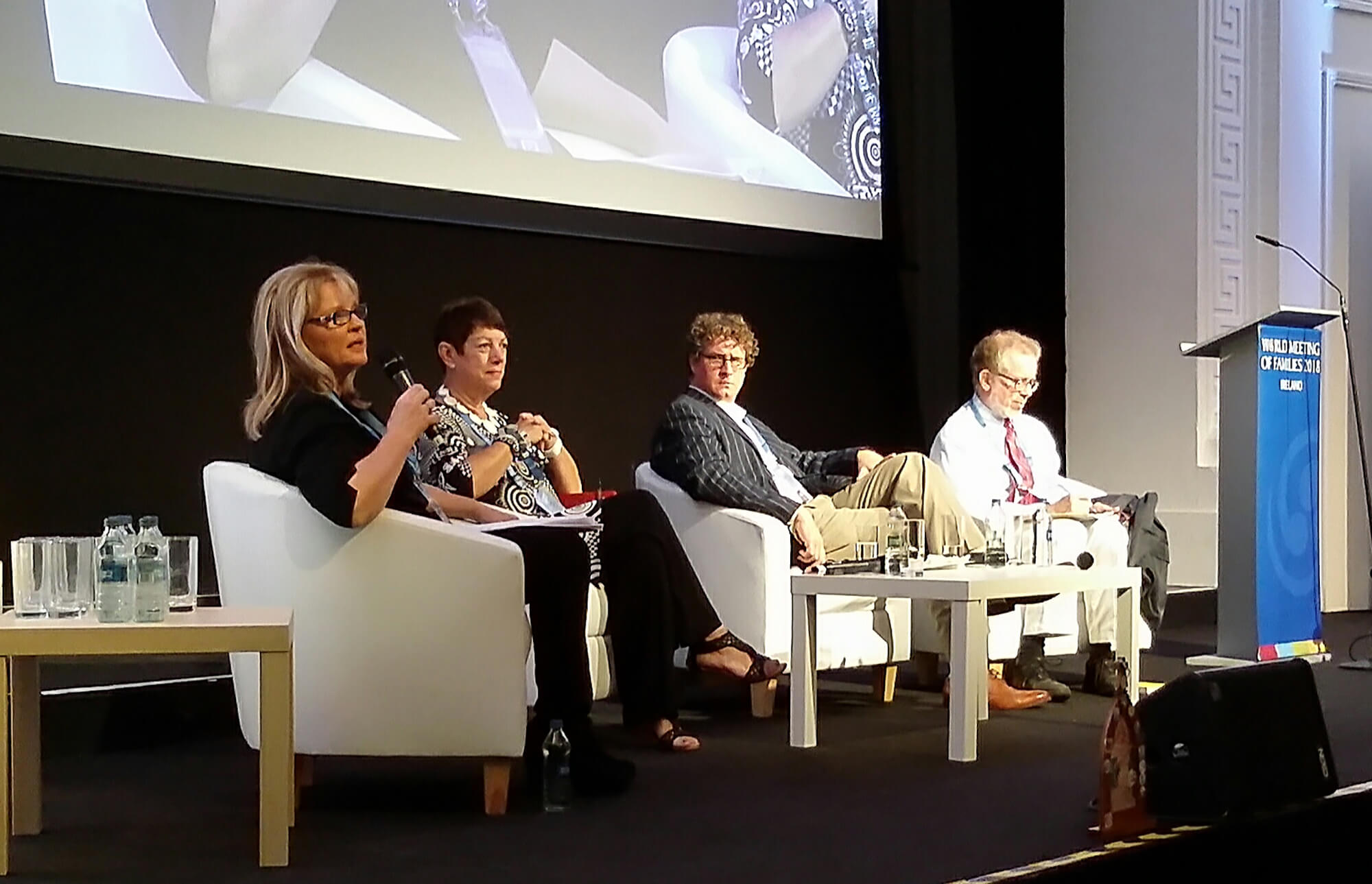 Photo Credit: CNS photo/Gina Christian - Mary Aiken, a cyberpsychologist, moderates a panel on "Dignity and Safety in a Digital Age" at the pastoral congress of the World Meeting of Families Aug. 22 in Dublin. Also on the panel are Teresa Kettelkamp, a member of the Pontifical Commission for the Protection of Minors, journalist Matthew Lickona and developmental psychologist Thomas Lickona.

Behavioral scientists and cybercrime experts talked to families about how digital distraction, pornography and the “online echo chamber” impact their lives, during one of the first panels at the international World Meeting of Families.

Pornography in particular has emerged as a threat to individual and family life, said panelist Thomas Lickona, a developmental psychologist from the State University of New York at Cortland.

Lickona cited numerous academic studies that document the widespread use and long-term effects of online pornography. One study observed that the average age at which boys in the United States and the United Kingdom begin to view internet pornography is now 11.

The normalization of pornography, combined with its “ubiquitous” distribution on social media platforms, leads to depression, anxiety, promiscuity, teen pregnancy, sexual assault and dysfunction, as well as marital infidelity, said Lickona. He listed several resources for combating pornography, the most important of which is a “family media plan.”

“We need to make it clear that the use of the Internet is a privilege, not a right,” Lickona said. “Usage should require parental permission and be managed in a way consistent with the family’s values.”

Lickona’s son Matthew, a San Diego-based journalist, shared his personal experiences of managing digital media as a parent, while reflecting on the often-damaging ways that social media reshapes self-perception and identity. Although it may begin as a form of self-expression, social media can quickly “trap us in an echo chamber” where we only listen to like-minded people and “unfriend” or ignore those with whom we disagree.

In contrast, “you can’t self-select your family,” said Matthew Lickona, adding that a true social life requires self-sacrifice and a commitment to peace.

Mary Aiken, a cyberpsychologist at University College Dublin and an academic adviser to Europol, the European Union’s largest law enforcement agency, moderated the panel. Noting that technology is neither good nor bad, Aiken stressed the need to use digital devices and social media with restraint.

“If you are a parent or caregiver to a young infant, and if you are consumed by your devices, then the infant is losing out,” Aiken said, adding that the average person looks at a cellphone 200 times, while touching it about 2,500 times, in a given day.

By distracting parents from engaging with their children, digital technology can hinder a child’s development. Lack of eye contact can prevent a child from bonding with parents, and Aiken said some preschool teachers have had to train students to look directly at others.

The panelists agreed that meeting the challenge social media presents to family life can involve “simple but difficult” solutions, such as committing to a regular meal together — something Pope Francis has endorsed as a “fundamental experience.”

“I think after Mass on Sunday we should sit down and just get together and talk over dinner,” she said.

Celia Barnes, a mother of 10 and grandmother of 13 from Wexford, Ireland, emphasized that regular conversations at the kitchen table enable parents “to find out what their kids are thinking.”

Aiken drew applause when she called for “academic first responders” who understand the urgency of studying the digital landscape in a timely manner that results in practical strategies for protecting children and families.

That task belongs to all the faithful, said panelist Teresa Kettelkamp, a member of the Pontifical Commission for the Protection of Minors.

In building “a foundation for universal child protection, Kettelkamp urged attendees to focus on two key tasks, whether or not they were directly responsible for children.

“We need to honor the sanctity of life,” said Kettelkamp, a retired colonel with the Illinois State Police. “And we need to remember that if you have the ability to help, then you have the responsibility to help — in your schools, your churches. This is part of your purpose on earth.”

An estimated 37,000 attendees from 116 countries are at the World Meeting of Family’s Aug. 22-24 pastoral congress, which features 290 speakers as well as dozens of workshops and discussions.

After the pastoral congress, the international gathering will conclude with a Festival of Families. Pope Francis arrives for that Aug. 25, followed by a papal visit to the Shrine of Our Lady of Knock and a final Mass Aug. 26 in Dublin’s Phoenix Park.