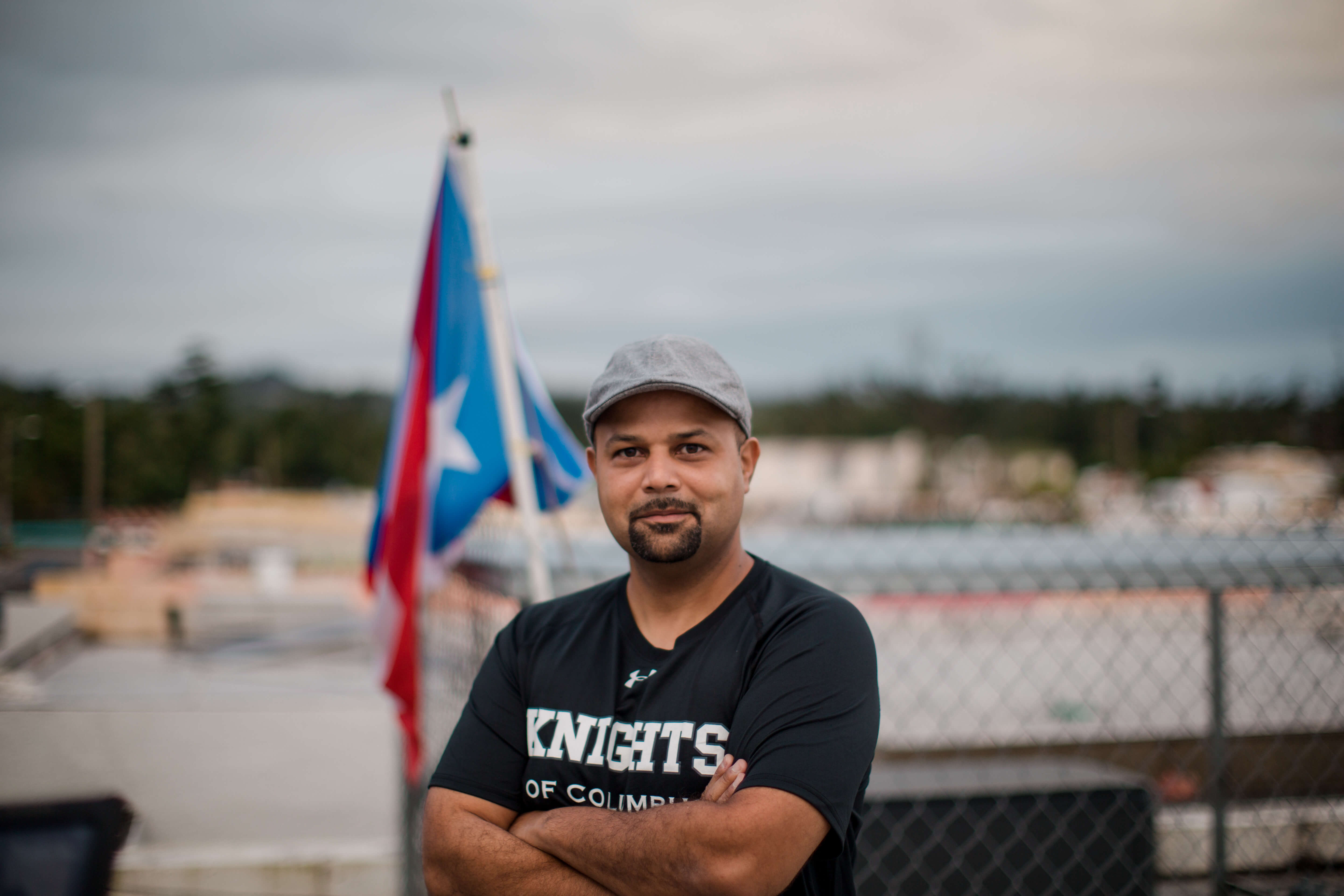 Photo Credit: CNS photo/courtesy Knights of Columbus - Jose Lebron-Sanabria, pictured in an undated photo, is a member of the Knights of Columbus and general insurance agent for the Knights in Humacao, Puerto Rico. Almost a year after Hurricane Maria devastated the island, life has improved somewhat as all power has now been restored but people are still rebuilding their lives, he said.

Puerto Rico getting back on feet ‘step by step,’ but long road remains

Nearly a year ago, Hurricane Maria slammed into Puerto Rico as a category 4 storm, and afterward 11-year-old Marco Lebron’s first thought was about the monks who teach at his school, Benedictine-run San Antonio Abad School and Abbey in Humacao.

“A few days after the hurricane I just think my school is in the middle of the forest, they’re monks, and they’re elderly, they’re retired,” Marco said. “And I just told my dad, ‘Hey, let’s see if they’re OK.'”

The monks have their own well but without electricity they couldn’t get water from it, said Benedictine Abbot Oscar Rivera. “It was hurricane like I’ve never seen before. Basically, all your fundamental necessities, like water, were gone. … We felt totally helpless.”

Helping the monks get water was one of the first things Marco and his father, Jose Lebron-Sanabria, set out to do in those first days after Maria; that and take care of their own family’s water needs. Lebron-Sanabria and his wife, Christina, also have a daughter, Natalia, 2.

He had even more people to help as a member of the Knights of Columbus and general insurance agent for the fraternal organization.

“We are getting back on our feet step by step,” Lebron-Sanabria told Catholic News Service in a phone interview from Humacao. As of Aug. 14, nearly 11 months after the storm, 100 percent of the customers who lost power have had electricity restored, ABC News reported.

But the needs are still great, especially for food, water and major home repair, he said. “Everybody is doing a lot — church, government, entities from around the world coming to help us.” By mid-summer, he saw real improvement. “But we still have a long way to go,” he added.

Lebron-Sanabria, Marco and Abbot Rivera recalled what conditions were like immediately after Maria hit Sept. 20 in interviews for a Knights of Columbus video in its “Everyday Heroes” online series. The Knights were among the entities donating funds for Puerto Rico’s recovery; relief for the island was part of the $7.5 million the organization gave in disaster aid in 2017.

In the video other Knights describe what life is like post-Maria and the kind of material help they and others have pitched in on to help their fellow residents.

“All Puerto Ricans will live differently after Hurricane Maria,” said one. “It felt as though something had been taken from us. It was though we had lost something.”

In a report to Congress in August, Puerto Rican officials put the death toll at 1,427, with most of the deaths coming in the days and weeks after the storm. With emergency services stretched and transportation hindered by downed power linings blocking the roads, people could not get needed medical attention and perished.

Lebron-Sanabria has been a Knight since 2011 and became an insurance agent in 2014. Three years later the Knights named him general agent for Puerto Rico. In that role he became a central leader in relief efforts after Maria.

“My job as general agent is to take care of people with good financial advice so they can protect their family’s economic future,” he said. “The first thing I had to do after the hurricane was to make sure the members were alive, that they were safe and that my field agents were well enough to take care of the other members.”

Jose’s brother, Hector Lebron-Sanabria, who is one of those field agents, said in the “Heroes” video that since Hurricane Maria, “every week we are cooking 500, 600, 400 hot dinners for the affected people here in Patillas.”

Added Hector Lebron-Lopez: “There is still a lot of poverty in the mountain area of Puerto Rico and Hurricane Maria emphasized that even more. For people who do not have usually have easy access to food and supplies it has now become even more difficult to have access to them.”

Jose Lebron-Sanabria told CNS he has never experienced anything before like Hurricane Maria and the devastation is caused to the island. “(What) we’ve been through is very difficult to express,” he said.

He feels his lifelong Catholic faith has helped him stay strong and truly believes feels Knights founder Father Michael McGivney has been looking out for all of them.

Son Marco also motivated him. “(He) was the guy who that pushed me through all of this. He’s a Boy Scout — he wanted to help with everything.”

Last but not least is wife Christina. “I don’t know what would happen if she was not side by side with me in this crisis,” he said. “She is the real hero.”