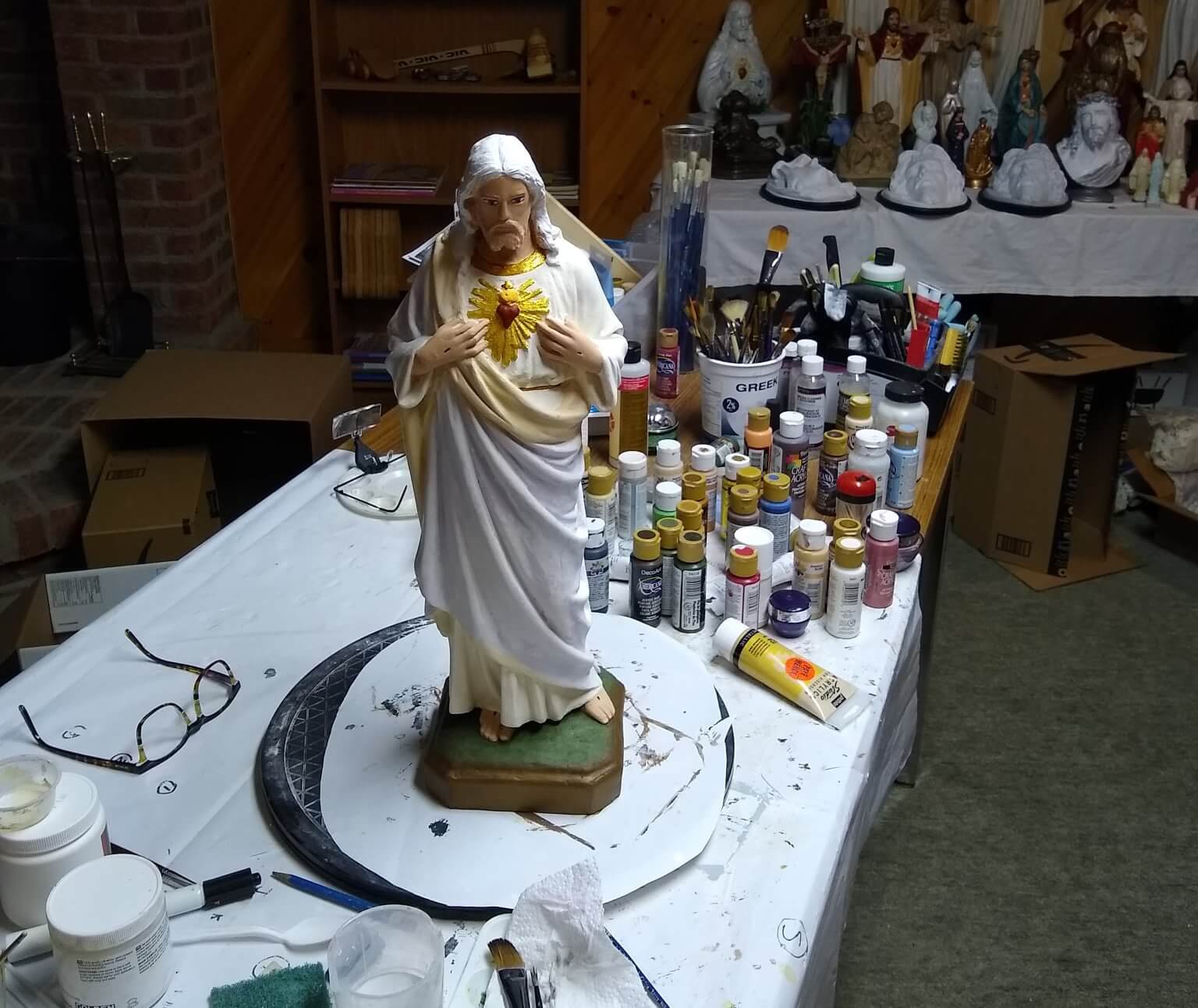 Self-taught restorer helps save statues for personal devotion in Quebec

A woman from Victoriaville, Quebec, is using a self-taught hobby to save and restore religious statues, and it has led her to reflect on French Canadians’ relationship with these objects of piety that often end up in the garbage.

Lyne Robichaud volunteered to help when her husband’s aunt wanted to restore a statue. What was meant to be a hobby grew when a parish published an ad inviting people to contact her rather than throwing away statues.

“It’s mostly the heritage and historical aspects of these objects that attract me,” she explained. “A lot of them are forgotten in today’s Quebec. They’re beautiful pieces, and it’s art! It’s not because it’s religious that we should deny or denigrate that it was art.”

She has no formation for this, except a passion for handmade ceramics, where she learned to revel in complex and detailed projects, not knowing she would one day apply these principles to Catholic statues.

“Some people knit, I do this,” she said cheerfully.

Robichaud said many statues suffer from being dropped or left outside for many years.

“Sometimes it’s more unusual: A lady contacted me because her maid, who wanted to wash her statue, erased a good part of the paint,” she said.

“When I see the extent to which some have been massacred, I want to restore them. I come across some funny ones with faces that are badly made up. I want to make them look more noble again,” she said.

Mary and Sacred Hearts statues are most popular; St. Anne statues are also quite popular. But sometimes Robichaud finds rarer models. She’s currently working on a state of Christ the King. Some time ago, she restored a concrete St. Jude.

“He has a flame on his head,” she explained. “It had been repainted. It looked like he had a red wig!”

The research phase is quite time-consuming. She takes inspiration from photos of existing works to pinpoint the appropriate colors. She’s helped by a Facebook group dedicated to Quebec’s religious heritage.

“People provide me with good information. Recently, I was looking to identify a crowned statue of Mary full of gilding. It is thanks to their help that I knew that it is a representation of Our Lady of Good Health in India.”

Robichaud counts neither the time nor the money invested. She thinks for a few seconds before estimating the workload that such a hobby requires.

“It depends on the size and condition of the statue. You forget about time. I would say, however, that it takes a good 20 hours per statue. Even before redoing the painting, there is a great deal of preparation work to be done.”

She disinfects moldy sections, reseals surfaces and applies missing plaster. She has to re-create some parts from scratch. Then several tests and mixes are needed before finding the desired shade of paint.

The materials are not that expensive, she said.

“It’s time! If I had to calculate it, it would be terrible,” she added with a laugh.

Part of her involvement consists in giving owners advice on how to properly take care of their statues, including the best practices for cleaning and maintenance.

Her best advice? “Don’t put it back outside! But if it’s out there, install a pedestal to avoid contact with the ground. Ideally, it should be sheltered or brought indoors in winter.”

Robichaud has completed about 30 restoration projects so far. Before the start of the pandemic, she was thinking of selling the statues to pay for the cost of the materials. She said she is open to the idea of restoring more statues but wants to avoid cluttering up her basement.

“If I stay with all this, I won’t be able to continue accumulating,” she explained.

Because of her Facebook page, she receives requests from various regions of Quebec as well as France.

“People have to travel to bring it to me. I’ve had requests for people who live too far away. I’m then forced to say no.”

These multiple requests made her realize that few resources exist to restore such objects, to which people remain attached.

A woman who had just bought a house found a very damaged Sacred Heart statue. She looked in vain for restoration services before discovering the work of Robichaud.

“The next day, she made the round trip to bring me her statue. Is it faith? Is it guilt for throwing away an object of devotion? Is it our Judeo-Christian upbringing that makes us want to revive these objects of worship?” Robichaud asked. “All these questions arise. … This is a new challenge for me, and this is a good one.”