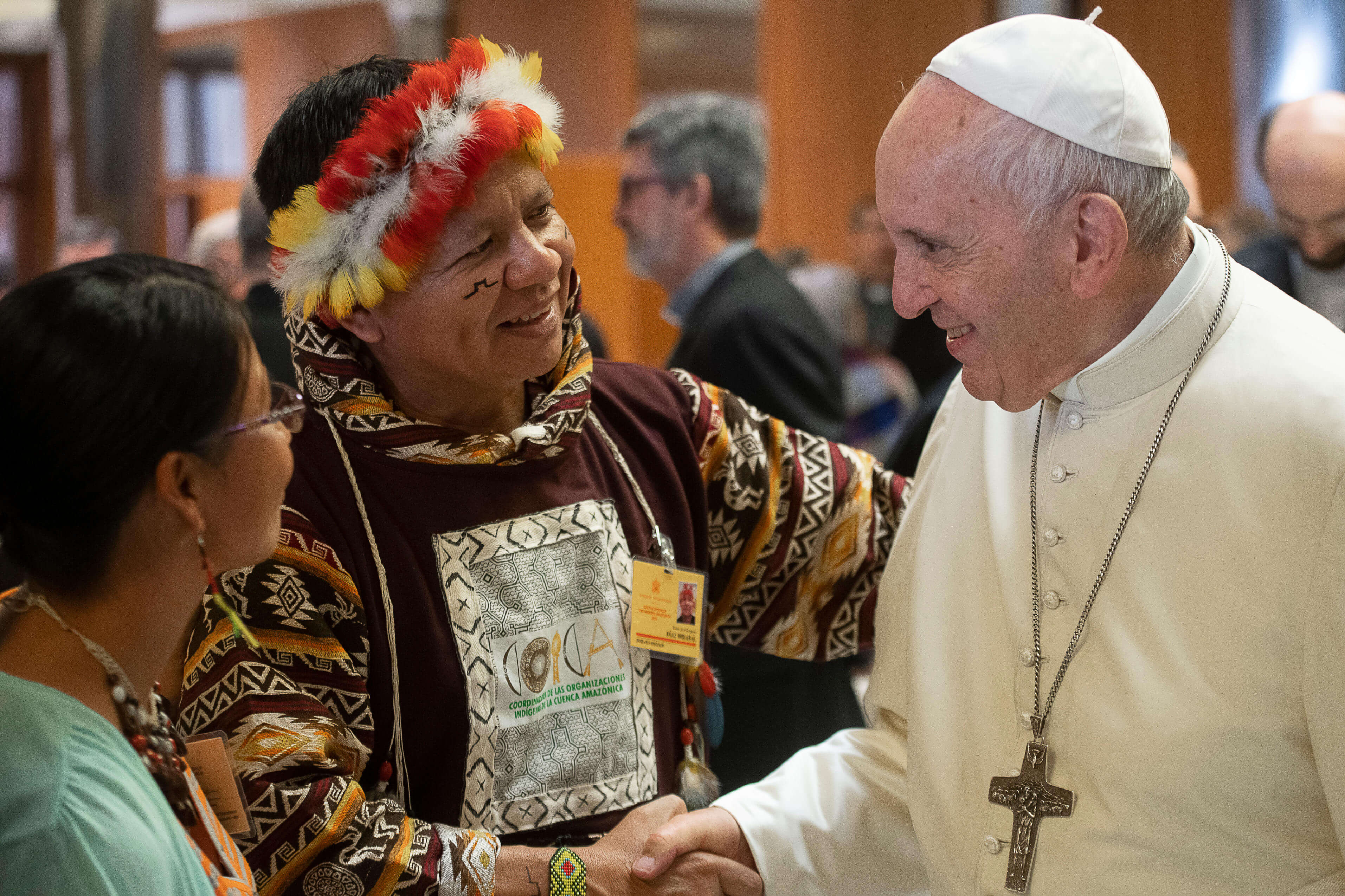 Photo Credit: CNS/Vatican Media - Pope Francis greets people during the Synod of Bishops for the Amazon at the Vatican Oct. 8.

Synod participants offered several proposals to address the lack of priests in the Amazon region, including revising the formation program for candidates to the priesthood and instituting new ministries for lay men and women.

According to a Vatican News summary of the Oct. 8 morning session of the Synod of Bishops for the Amazon, the proposals included discussing the “possibility of diaconal ordination for women, so as to emphasize their ecclesial vocation.”

While synod participants said there is a need for greater appreciation of consecrated life, they also proposed allowing local churches “to choose ministers authorized to celebrate the Eucharist or to ordain permanent deacons.”

Accompanied by pastors, lay ministers would assist in administering the sacraments and would help in “promoting indigenous vocations,” said the summary. The synod is not releasing the texts of individuals speeches and the summaries do not identify the person or persons who made the suggestions.

At a Vatican briefing Oct. 8, Paolo Ruffini, prefect of the Dicastery for Communication, told journalists that several speeches delivered in the synod hall highlighted the fact that indigenous Catholics often feel like “second- or third-class Catholics.”

The “question the synod fathers tried to find an answer to is: How can the church bring Jesus, (present) in the Eucharist, to these people who are not second class (Catholics)?” he said.

According to L’Osservatore Romano, the Vatican newspaper, synod members were “struck by the difficult pastoral situations of some dioceses.”

“There are areas, for example, in which the ratio between priests and territories is equivalent to one for every 25,000 square kilometers (9,653 square miles) or where to serve 1,100 villages there are just 45 priests,” the newspaper said.

Other members said that it would be wrong for the church “to adopt a functionalist approach to the priesthood,” Ruffini said.

“If the church lives from the Eucharist, and if the Eucharist builds the church, it is the people themselves who demand a permanent presence and not just a visit,” one member said, according to Ruffini.

Seminary formation, he continued, was another area of discussion and synod members expressed concern that current methods must be updated to better prepare candidates for the challenges of evangelizing in a large, remote area to “reduce the risk of them abandoning” their ministry.

Synod members also reflected on the need for greater participation of the laity. The complexity and challenges in evangelizing remote areas like the Amazon “require specific skills and knowledge to which priests cannot always offer all the answers,” the Vatican News summary said.

With secularism, religious indifference and the “dizzying” rise in Pentecostal churches, “the church must learn to consult and listen more to the voice of the laity,” it said.

Several bishops also proposed the ordination of married “viri probati,” or men of proven virtue, to address the lack of priests, suggesting that the church could “evaluate over time whether this experience is valid or not.”

However, Vatican News said, other synod members voiced their concerns that ordaining married “viri probati” may risk reducing the role of the priest to “a simple Mass officiant” rather than “a pastor of the communities, a teacher of Christian life and a concrete presence of Christ’s closeness.”