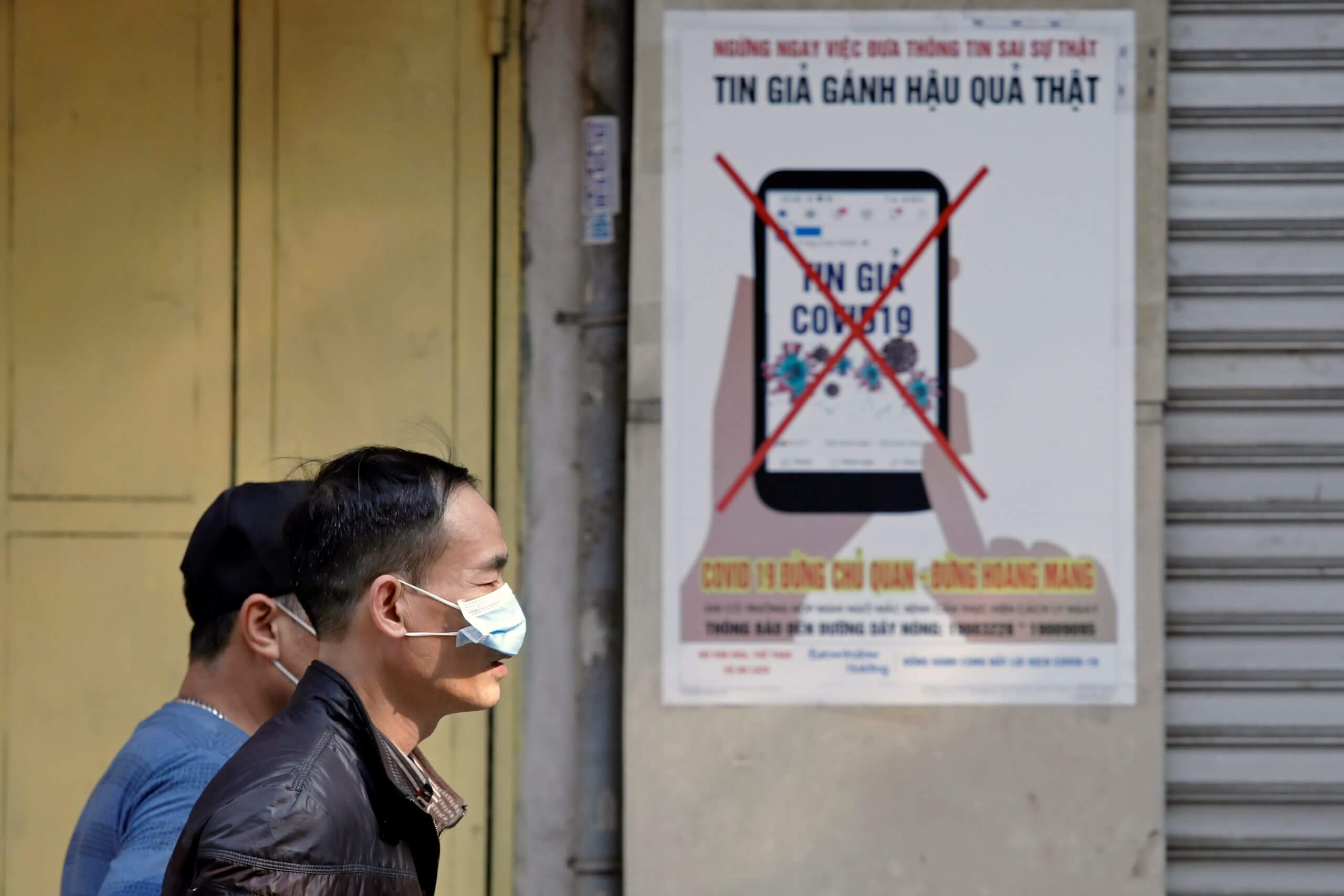 Photo Credit: CNS/Kham, Reuters - Men wear protective masks as they walk past a poster warning against the spread of '"fake news" online about Covid-19, in Hanoi, Vietnam. The Pontifical Academy of Social Sciences hosted a workshop this month on the "post-truth" era in communications.

Instead of shouting down or shutting out people who support the latest conspiracy theory, deny scientific evidence or believe in “fake” news, a number of scholars are urging people to reach out, listen and talk to others in healthier ways.

Much of the polarization and animosity is being driven by assumptions and prejudices about “the other side” when, in reality, “we actually agree on a ton of stuff and that’s why this idea of deliberation is so important,” said one of those scholars, Jennifer Kavanagh, a senior political scientist at the RAND Corporation.

“We can figure out in those conversations that we actually agree on a lot,” said Kavanagh, who heads RAND’s “Countering Truth Decay” initiative, which studies the decreasing reliance on facts and analysis in political and civil discourse in the United States. She was one of the experts invited to speak at the Pontifical Academy of Social Sciences Sept. 13-14.

When facing misinformation or paralyzing skepticism, people need to promote factual evidence “from the bottom up,” through face-to-face dialogue, said Ana Marta González, a professor of philosophy at the University of Navarra and an academy member.

“The way should be self-regulation by society,” which supports freedom of speech grounded in ethics and professional standards and which creates “communities of trust,” she said.

“The problem we are facing is a problem of trust,” so there needs to be more avenues and occasions for the free exchange of views in a way that builds a sense of friendship, despite the disagreements, she said.

Increasingly polarized opinions, distrust and misinformation haven’t just ruined holiday dinners or interactions on social media; they are threats to democracy, communities and the ability to address serious challenges, according to a number of the speakers.

“The growing disregard for facts by the public and political leaders has serious consequences for policymaking, inhibiting evidenced based decision-making to protect our planet, address social problems and alleviate human suffering around the globe,” the academy said in its workshop booklet.

“While intentional lying, especially by political leaders, is likely as old as civilization itself, we have entered a new era where truth, objective facts and science are increasingly under assault,” it said, which is why the academy came together online and onsite to discuss, “Truth and Post-Truth in Communication, Media and Society.”

In a “post-truth” universe, truth still matters, but it is under attack, said Lee McIntyre, a research fellow at the Center for Philosophy and History of Science at Boston University.

“If you don’t like the truth, challenge it, pretend it’s not the case, provide a counter-narrative. You don’t need to prove anything or even provide any evidence, just create enough doubt that your supporters have enough to hang their hats on,” he said.

“The taproot of today’s post-truth” world is science denialism, he said, which rejects empirically supported propositions and refuses to recognize when there is wide consensus.

The tobacco industry, for example, ran a hugely successful science denial campaign beginning in the 1950s when it hired public relations experts to refute and then cast doubt on any scientific evidence of the connection between tobacco use and cancer, he said. The pervasiveness of the manufactured doubt delayed action for decades on enacting regulations and providing health warnings to consumers.

Still, the tobacco industry’s stalling tactics worked so well, McIntyre said, that other groups working to undermine trust in other fields, like climate science and vaccinations, have modeled their strategies after the tobacco industry’s. These tactics “have metastasized” and can be used to deny any kind of reality, not just science, he said.

More education in “media literacy and scientific literacy” is needed to “inoculate” people against intentional mistakes and manipulation, said Kavanagh.

It’s not about teaching people what to believe, she said, “but it’s how to think about information; how to consume online information; what are the questions I need to ask to understand if this is a good source; who are the experts I should be turning to in this area; what is the scientific method; what counts as a rigorous study, how does scientific knowledge evolve.”

This last feature is key because if people don’t understand how science works and that previous conclusions might change as more data comes in, this can be “weaponized” to discredit all science, said Jane Suiter, head of Dublin City University’s Institute for Future Media, Democracy and Society.

Also to blame, she said, is the growing reliance on specialist expertise in forming government policies in a way that excludes any public scrutiny. One antidote is a process called “deliberative democracy,” said Suiter, who is research lead of Ireland’s Citizens’ Assembly, which brings randomly selected citizens “from different walks of life” together to consider a policy issue and produce a report for the government to respond to.

These deliberative assemblies bring in independent specialists representing all sides in a setting that is conducive to respectful discussion; “it’s not a TV news debate,” she said.

The aim “is not necessarily that we need to have consensus,” Suiter said, but people are guided to listen to good information and carefully consider all the arguments, so they become more open minded, more informed themselves and become “trusted information proxies” for the wider community.

Boston University’s McIntyre said, “We already have the tools at our disposal to fight back against misinformation and disinformation.”

Psychological research suggests that “denialist beliefs are not actually about ideology but identity — what team you’re on,” he said, citing his experience forging relationships with so-called “flat earthers.”

“The way to reach someone and change their mind is not to approach them with facts to cram down their throat, but, with empathy and respect, to help them see that there is room for them on the side of reality and reason,” he said.