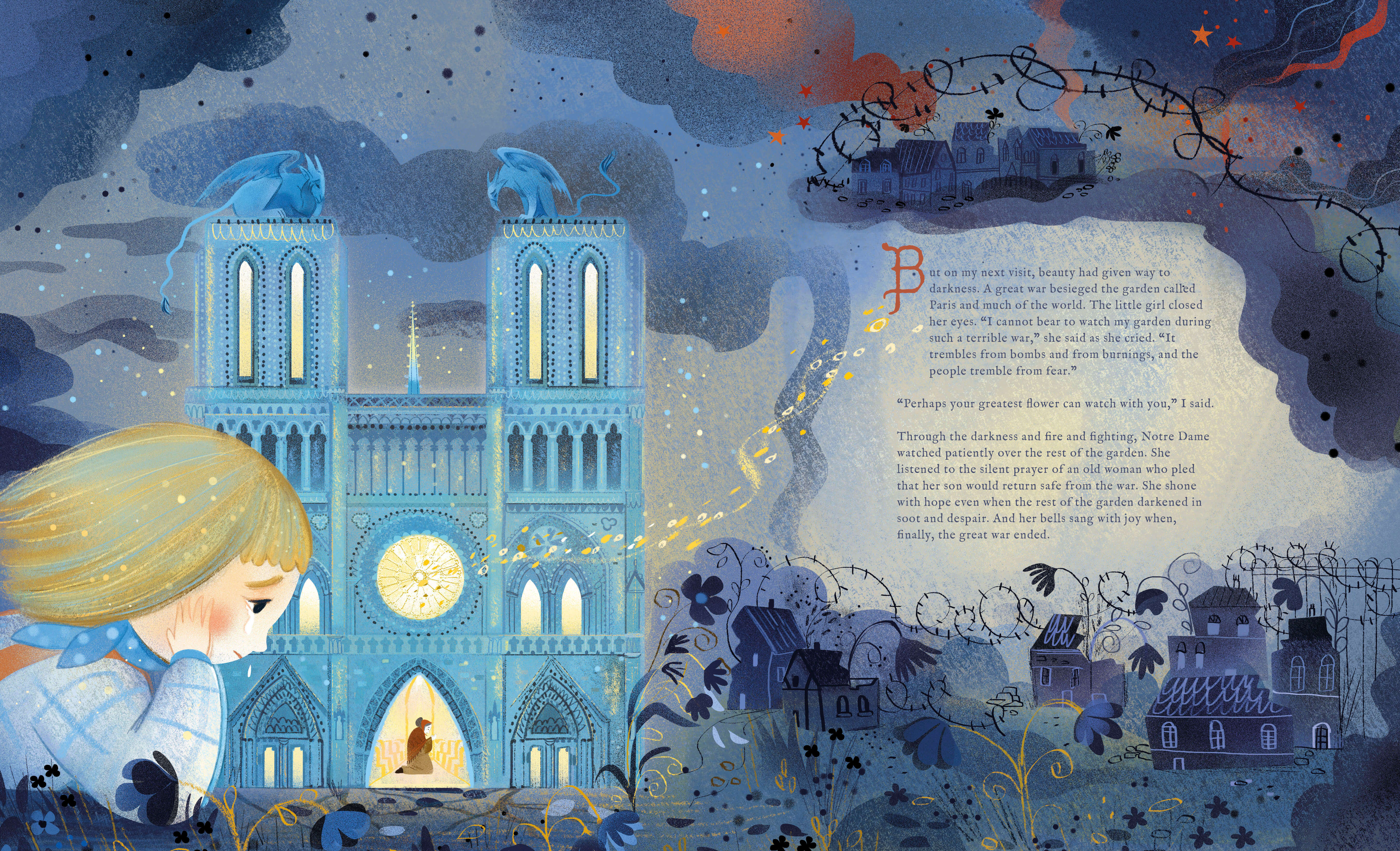 Photo Credit: CNS illustration/Sara Ugolotti via David and Stephanie Miles - This is the cover of "The Girl and the Cathedral" by Nicolas Jeter. The children's book is a tribute to the historic Notre Dame Cathedral in Paris that was badly damaged in an April 15, fire. Jeter tells the story through the eponymous "girl.”

A testament to the great Notre-Dame de Paris, “The Girl and the Cathedral” is a beautiful retelling of the history of the “greatest flower of Paris” and the “garden of people” who grew around it.

Texan Nicolas Jeter, a combination Francophile, history nerd and lawyer, wrote the children’s book in remembrance of the great cathedral that watched French history roll by as a steady, stone sentinel guarding the city until the day of the fire in April. The book will proceed to the publication process in seven days if the project meets its $10,000 Kickstarter goal by Aug. 20.

“In the broader sense, Notre Dame is an important building because of what it represents to so many Catholics, and because so much of our civilization is built on a Europe that was so heavily influenced by the Roman Church,” the author said. “It is built into our cultural DNA. I think that explains why so many nonreligious Americans were so profoundly affected by the fire.”

Jeter tells the story through the eponymous “girl.” At the beginning of the book, the girl plants a garden that grows into Paris, and the most beautiful flower in the garden is Notre-Dame de Paris. As other flowers bloom around the cathedral, the girl watches her garden in turmoil, as weeds pop up during the French Revolution and World War II, but she also sees times of flourishing. Finally, she witnesses the destruction of her greatest, most beautiful flower, Notre-Dame de Paris.

The real-life vigils held in front of the cathedral the night of the fire inspired Jeter’s retelling of that climactic scene.

“A lot of news outlets captured videos of Parisians gathering around and it turns into a night vigil. A lot of them started singing what I assumed were Catholic songs,” Jeter told Catholic News Service. “I thought that was a beautiful image. … I wanted that to be significant for the girl. That the people are going to save her flower. Ultimately (Notre-Dame) can burn down, but if people care about this, then Notre-Dame will be OK.”

The book comes with various add-ons, including an “architect” set, which includes photos of some of cathedral’s architecture, a print of a vintage Paris map and a limestone carved gargoyle.

In addition, Bushel and Peck Publishing Co. has promised to donate a book to a child in need for every copy of “The Girl and the Cathedral” purchased.

Jeter hopes that eventually, the book will circulate to France via a French publisher.

“This is a love letter to Notre-Dame to Paris and to the French people,” Jeter said. “I would like to get it published so they can have it over there.”

To donate to “The Girl and the Cathedral” Kickstarter fund and pre-order a copy of the book, visit https://bit.ly/2MZewYY.