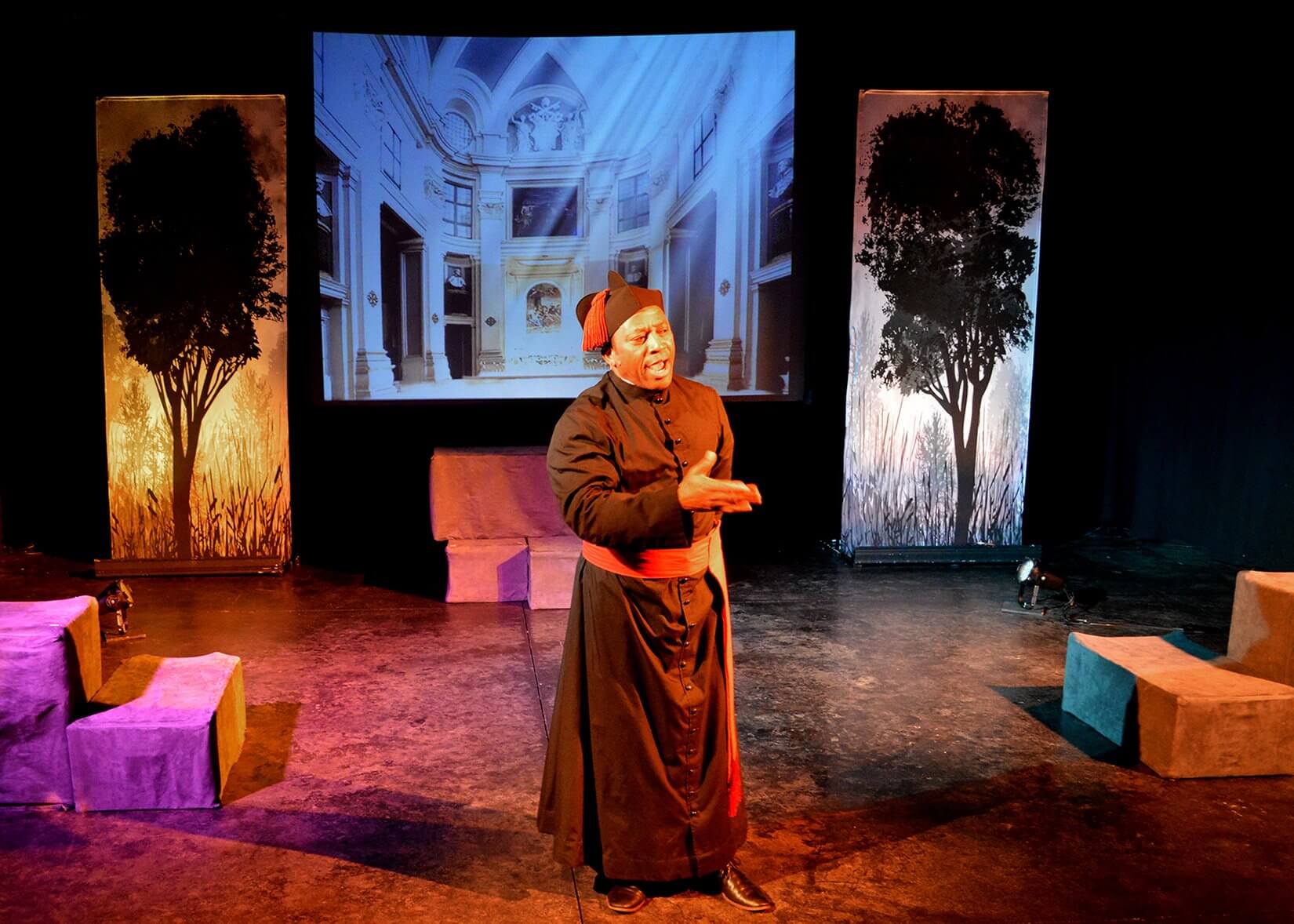 Photo Credit: CNS/courtesy St. Luke Productions via Catholic Review - Jim Coleman portrays Father Augustus Tolton in a national traveling theater production of "Tolton: From Slave to Priest." Father Tolton, born into slavery, was the first recognized Black American ordained to the priesthood and is a candidate for sainthood.

Actor is ‘transformed’ by portraying Father Tolton in theater production

While he found the story of America’s first recognized Black Catholic priest inspirational, the veteran actor of more than two decades was more interested in television and film roles.

“Theater was something I did at the very beginning of my career,” recalled Coleman, best known for playing Roger Parker in the Nickelodeon hit show “My Brother and Me.”

At the insistence of a friend, Coleman auditioned for the part with St. Luke Productions. He was “greatly relieved,” however, when he didn’t get the role.

“A few months after that, I was offered the part,” said Coleman, a former medic in the U.S. Army who lives in Orlando, Florida. “I prayed about it with my wife and decided to give it a chance.”

Nearly four years later and after nearly 300 performances of “Tolton: From Slave to Priest,” Coleman said his life has been transformed.

People have approached him after performances with tears in their eyes, overwhelmed by Father Tolton’s faith and courage. Seminarians have told him the production encouraged them to continue on their own journey to the priesthood.

And former seminarians who are now priests have arranged to have the production performed at their parishes.

“It’s changed my heart in ways I couldn’t even imagine,” Coleman told The Josephite Harvest, magazine of the St. Joseph’s Society of the Sacred Heart, or the Josephites.

“With each performance, I pray to Father Tolton and I ask that he speaks through me that I become a vessel for his story,” the actor added.

Father Tolton was born into slavery in 1854. His widowed mother, Martha Tolton, escaped Missouri to Illinois, rowing to freedom with Augustus and her two other children across the Mississippi River in a leaky boat as Confederate soldiers shot at her.

Augustus, a faith-filled young man, felt called to the priesthood, but could not find a seminary in the United States that would accept a Black man.

“All he wanted was to serve God,” Coleman said. “To be denied that was just heartbreaking.”

Father Tolton prepared for the priesthood in Rome, where he was ordained in 1886.

Although he had expected to serve as a missionary in Africa, Father Tolton was sent back to the United States after his ordination. He was declared venerable by Pope Francis in 2019, and his sainthood cause is under consideration at the Vatican.

Coleman believes much of Father Tolton’s courage came from his mother.

“His mother prayed for him,” he said. “When he wanted to give up, she told him he couldn’t give up. She told him that Jesus fell when he carried his cross and that he wasn’t carrying a burden half as heavy.”

Acting isn’t Coleman’s only responsibility with the Tolton production. He also drives the truck carrying the stage set — building the onstage scenery and breaking it down, loading it into the truck and driving onto the next location. The only other person with him is a stage manager.

“It gives me energy to go around doing the show,” he said. “I absolutely love it.”

Coleman, the son of a Baptist minister, said the Tolton story isn’t just for Catholics. It carries a universal message.

“It’s amazing how once you sit through this story, you understand that it’s about how we are all one,” he said. “We’re all one in Christ. There’s only one race, and that’s the human race.”

—Editor’s Note: For more information about the traveling production of “Tolton: From Slave to Priest,” visit the website of St. Luke Productions, bit.ly/3nH5scA.