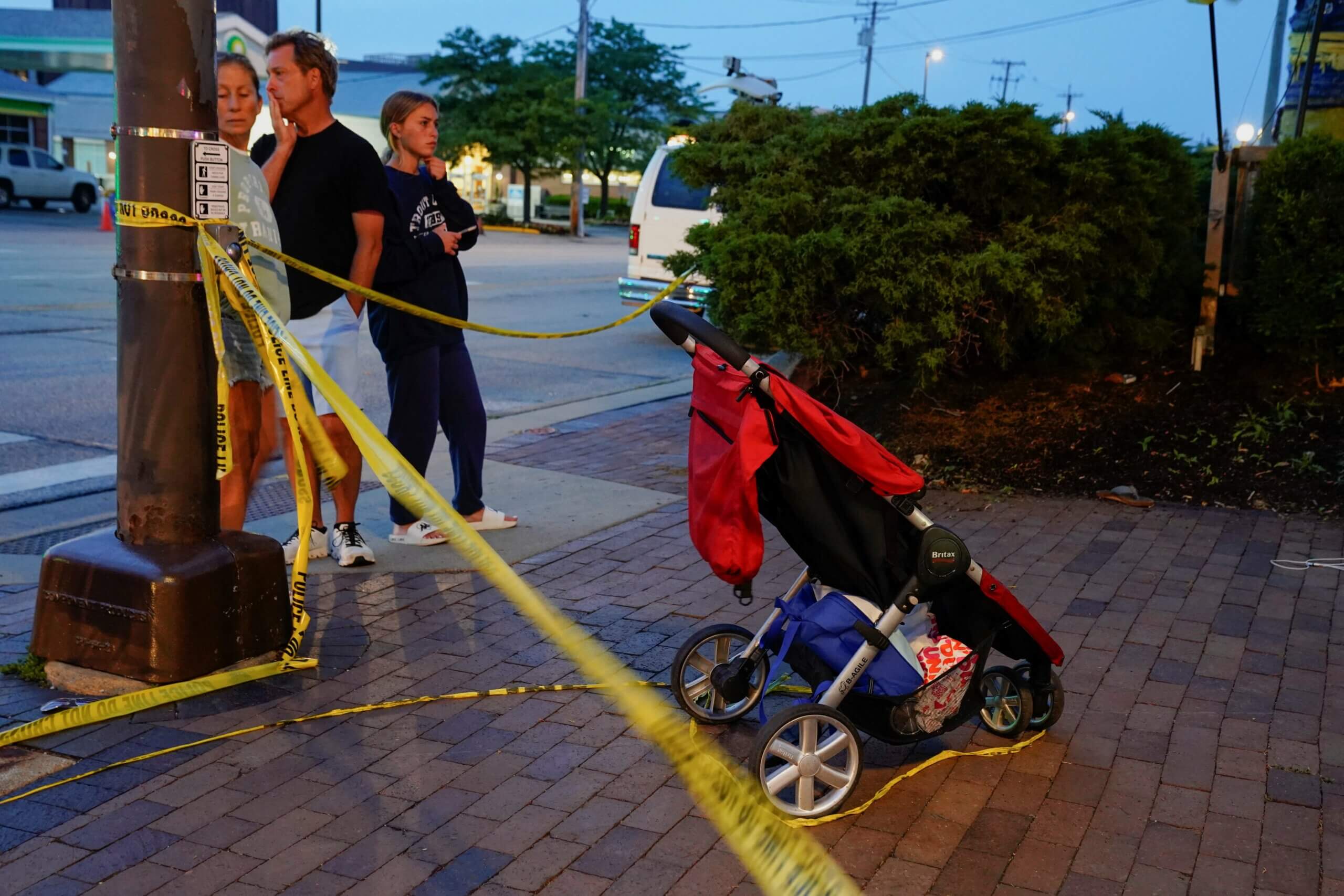 Photo Credit: CNS/Cheney Orr, Reuters - People in the Chicago suburb of Highland Park, Illinois, visit the site of a July 4 mass shooting that took place during the city's parade for Independence Day.

After shooting, cardinal urges unity to ‘build path to safety and peace’

Saying he watched “in horror” news reports in the aftermath of a mass shooting during a suburban Fourth of July parade, Cardinal Blase Cupich of Chicago offered prayers for the victims.

At least six people died and more than two dozen others were injured.

“What should have been a peaceful celebration of our nation’s founding ended in unspeakable tragedy,” Cardinal Cupich said in a statement released hours after the tragedy by the archdiocese of Chicago.

Pointing to the victims, who authorities said ranged in age from 8 to 85, Cardinal Cupich said, “Weapons designed to rapidly destroy human bodies have no place in civil society.”

Law enforcement authorities said they arrested a “person of interest” about eight hours after the shooting in Highland Park in Chicago’s affluent North Shore. Police identified the man as Robert E. Crimo III, 22, of suburban Chicago.

The man was apprehended without incident on a busy highway in a nearby suburb after briefly fleeing officers. Officials said their investigation was continuing July 5.

Five adults were reported dead along the parade route while a sixth person of an unknown age died at a local hospital. Highland Park Fire Chief Joe Schrage said emergency workers transported 23 people to hospitals, while others walked into emergency rooms.

“Please join me in praying for the victims and their loved ones, who never imagined a July 4 celebration could become a killing ground,” Cardinal Cupich said.

“May the Lord of mercy embrace in love those who have died, bring healing to the wounded, comfort to their loved ones and courage to all of us, so that we may respond to the tragedy united as God’s children to build a path to safety and peace,” he added.

In a telegram to Cardinal Cupich, Cardinal Pietro Parolin, Vatican secretary of state, said that Pope Francis was “deeply saddened to learn of the senseless shooting that took place in Highland Park and he asks you to convey his spiritual closeness to all affected by this attack.”

The diplomatic message also noted that the pope was praying for the dead and “healing and consolation to the injured and bereaved.”

“With unwavering faith that the grace of God is able to convert even the hardest of hearts, making it possible to ‘depart from evil and do good,’ Pope Francis prays that every member of society will reject violence in all of its forms and respect life in all of its stages,” Cardinal Parolin’s message said.

Reaction to the violent event included statements from the Philadelphia and San Antonio archbishops.

Philadelphia Archbishop Nelson J. Pérez called for steps to end violence in society following the Illinois incident and the shooting of two Philadelphia police officers during a concert and the city’s annual Fourth of July fireworks display.

The officers were treated at a local hospital and released. Officials were investigating who fired the shots and why.

“Civic celebrations like the commemoration of our country’s birth are meant to unify our richly diverse populace. They prompt us to reflect on the lofty goal of preserving and protecting freedom, dignity, equality and opportunity for all of our brothers and sisters,” Archbishop Pérez said in a statement early July 5.

Saying that the two incidents “draped a heavy pall over our already wounded and struggling nation,” the archbishop explained that society’s “collective mettle is being tested over and over again. Evil acts and senseless loss of life have become all too common features of our landscape.”

He recalled his message for Independence Day in which he stressed that the “American spirit shines brightest when we treat our neighbors with dignity and respect.”

“In the wake of further pain, confusion and sadness, we must act. Words alone are not enough. Acts of kindness and charity, no matter the size, are contagious. Let’s work together and mend the tears in the fabric of our nation’s soul,” Archbishop Pérez said.

In a series of tweets, San Antonio Archbishop Gustavo García-Siller eschewed gun violence and prayed for a conversion of hearts and minds throughout the country.

“Guns should not be an America idol,” he tweeted. “In this anniversary let us pray for civilization in our Country.”

“The right to bear arms does not eclipse the right to life or the right of all Americans to go about their lives free of the fear that they might be shredded by bullets at any moment,” Cardinal Cupich said. “Gun violence is a life issue. We must continue to pray that all our officials, elected and unelected alike, will redouble their commitment to keeping safe the people they have sworn to serve.”

The White House released a statement from Biden and first lady Jill Biden saying they were “shocked by the senseless gun violence that has yet again brought grief to an American community on this Independence Day.”

There is “much more work to do,” Biden said.

In a late afternoon Independence Day gathering with military families at the White House, Biden asked for a moment of silence for the Illinois victims.

“Six people have passed and others are wounded, but we’ve got a lot more work to do, we’ve got to get this under control,” Biden said.