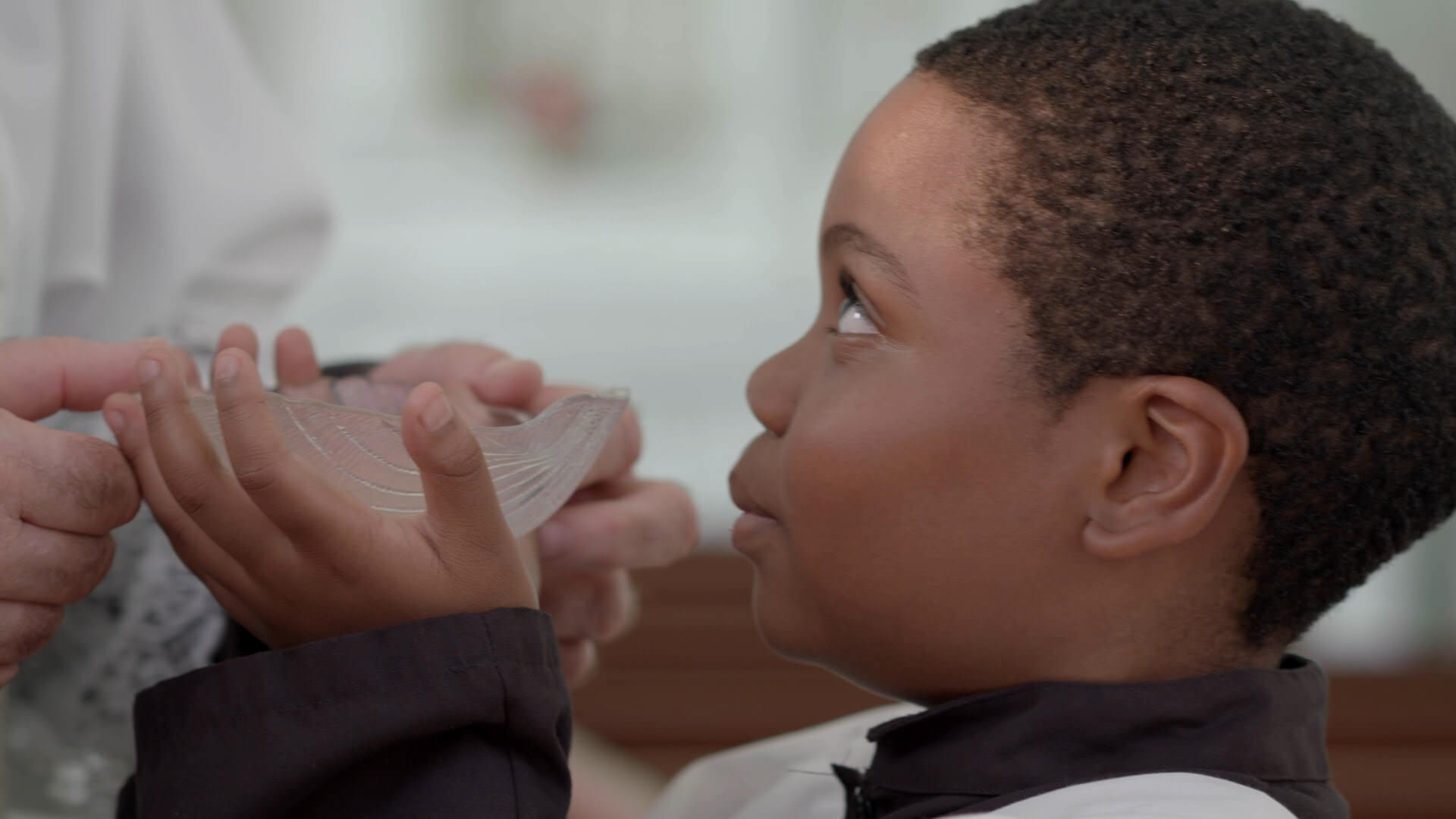 Photo Credit: CNS/courtesy Chris Foley and Bolder Pictures - A young Augustus Tolton, who later became a priest, is portrayed in the movie "Across," written and directed by filmmaker Chris Foley of Nashville, Tennessee. The short film tells the story of Father Tolton, who was the first African-American priest ordained for a U.S. diocese and who is a candidate for sainthood.

Chicago Auxiliary Bishop Joseph N. Perry, postulator of Father Augustus Tolton’s sainthood cause, said he was “touched emotionally” by the portrayal of the African-American priest’s boyhood and family life in the new short film “Across.”

“It is the first attempt about a film on his life, and it validated everything I have come to know about him, from the research phase that we took on while composing the official dossier that we sent to Rome,” said Bishop Perry.

So just how moved was Bishop Perry upon seeing “Across”?

“A couple of times I had to hold back tears as my eyes were watering up, and I look forward to the next chapters of the film that will entail Father Tolton’s life in his adolescence, adulthood, priesthood and death,” he told Catholic News Service.

The bishop made the comments while he was in Nashville recently to attend a private screening of “Across” at the motherhouse of the Dominican Sisters of St. Cecilia during Black History Month, observed in February.

Nashville filmmaker Chris Foley wrote and directed the short film about the Tolton family’s escape from slavery in Missouri into Illinois.

Augustus Tolton was born into slavery in 1854 on a plantation near Brush Creek, Missouri. He was baptized at St. Peter Church near Hannibal, Missouri. In 1862, his mother, Martha, escaped with her children — Augustus, Charley, Samuel and Anne — by rowing them across the Mississippi River to the free state of Illinois. They settled in Quincy.

His father was not with them because he had left to try to join the Union Army during the Civil War; he later died of dysentery, according to accounts Father Tolton told friends and parishioners.

Young Augustus was encouraged to discern his vocation to the priesthood by the Franciscan priests who taught him at St. Francis College, now Quincy University, but could not find a seminary in the United States that would accept him. He went to study for the priesthood in Rome, where he was ordained on Easter Sunday 1886.

He returned to the U.S. for parish ministry, first in Quincy, which is in the Diocese of Springfield, then in Chicago where he spearheaded the building of St. Monica Church for black Catholics. He died in 1897 while ministering to parishioners.

Father Tolton is the first African-American to be ordained a Catholic priest for the United States.

Father James Healy (1830-1900) is considered by some to be the first black U.S. Catholic priest in the U.S. He was biracial; his father was Irish. Born in Georgia, he was ordained in 1854 in Paris for ministry in the U.S. He later became a bishop, heading the Diocese of Portland, Maine.

Bishop Perry said he had met Foley, the filmmaker, at a talk he gave at a private school in Milwaukee. “(It) was an introduction to Father Tolton’s life and times,” he told CNS.

Impressed by the talk, Foley told Bishop Perry that he wanted to do a film about Father Tolton, whom he has described as “a role model for priests — black and otherwise — in this country.”

The Archdiocese of Chicago formally opened Father Tolton’s cause for canonization in 2010, giving the priest the title of “servant of God.” The Diocese of Springfield, Illinois, where he first served as a priest, and the Diocese of Jefferson City, Missouri, where his family was enslaved, also have had a role in the cause.

Bishop Perry, one of the nation’s African-American Catholic bishops, gave an overview of the progress of the priest’s cause, noting that “nine years of research have been completed, the Vatican historical and theological commissions have completed their work, and registered their votes in both instances to move the cause forward.”

One major step in the process took place Feb. 5, the feast of St. Agatha. That day a nine-member Vatican theological commission unanimously voted that Father Tolton’s cause be moved forward to the cardinals and archbishops in the Congregation for Saints’ Causes for a final vote to send a decree of the priest’s “heroic virtues” to Pope Francis for his approval.

Upon the promulgation of that decree, Father Tolton would receive the title “venerable.” The next steps would be beatification and then canonization. In general, for each of those steps a miracle attributed to the intercession of the sainthood candidate must be verified by the Vatican.

Asked what Father Tolton’s canonization would mean to America’s black Catholics, Bishop Perry said it would usher in a place them “alongside other ethnic groups who have saints of their own and raise aloft the saga of African-Americans’ suffering alongside these other groups.”

“It would validate the black Catholic experience and further underscore the multicultural variety that is the Roman Catholic Church, while addressing some of the myths that blacks have no place in the Catholic Church,” he added.

One of the Nashville Dominicans, Sister Henry Suso Hoffsommer, told CNS she first saw “Across” at a screening of the film for its cast and crew, hosted by Foley.

“I knew that he’d undertaken an important project, and after seeing the film, I wanted the other sisters to see it as well, and arranged with Chris to show the film at the motherhouse for any sister who would be able to come,” said Sister Henry.

“The sisters’ reaction to the film was very positive; several said that the movie was ‘inspiring’ and many expressed their hope that it would be expanded into a full-length movie,” she added.