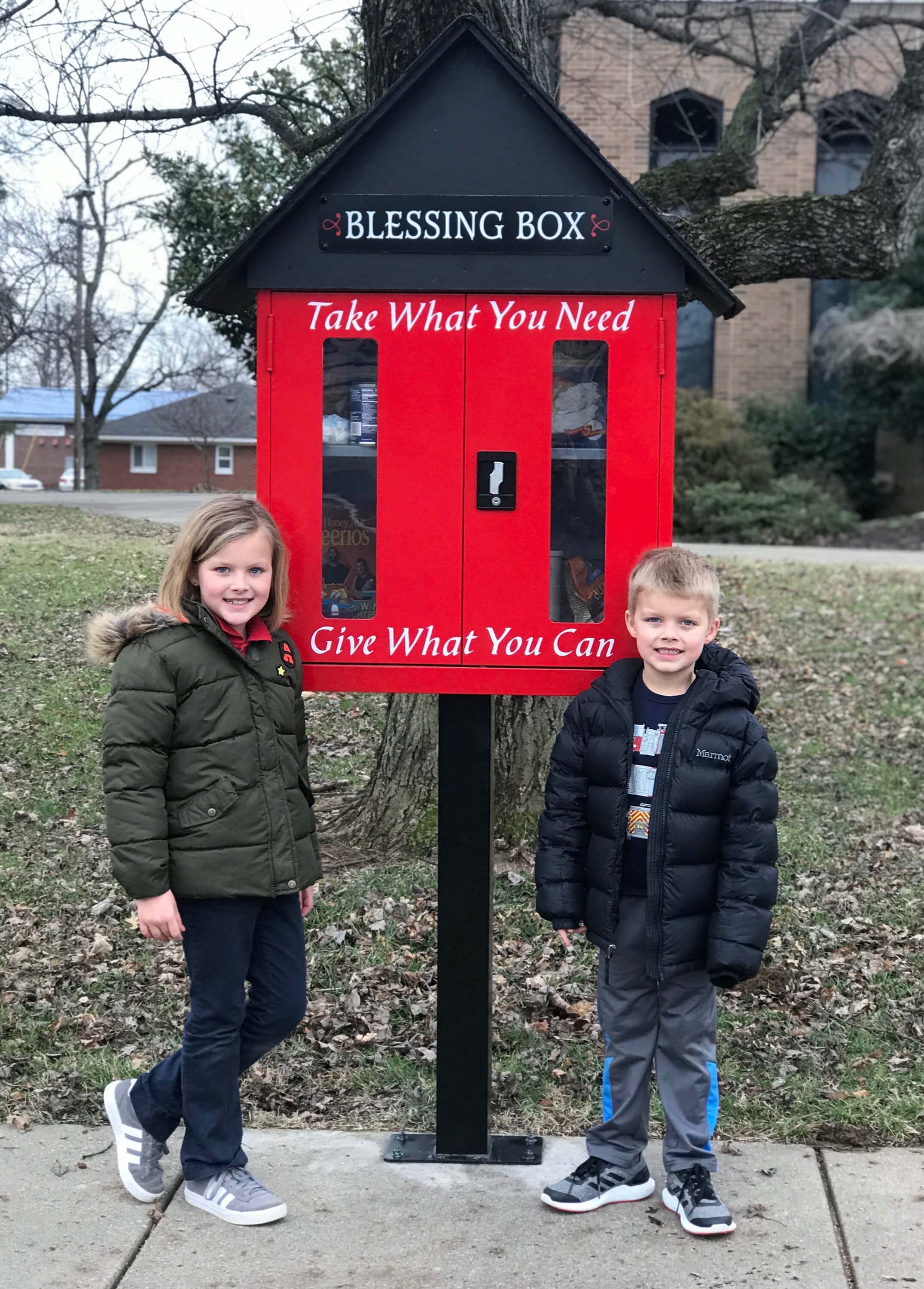 Photo Credit: CNS/courtesy Most Sacred Heart of Jesus Parish - Hadly Nickell and Hays Nickell pose by the "Blessing Box" on the grounds of Most Sacred Heart of Jesus Church in Jeffersonville, Indiana, which was set up in January. The pastor said parishioners want to help individuals and families in need through the stand-alone structure, filled with nonperishable food items and toiletries that anyone in need can access at any time of day.

Father Doug Marcotte believes “there’s no better way to change a community than one small act of kindness at a time.”

So the pastor of Most Sacred Heart of Jesus Parish in Jeffersonville, Indiana, embraced a plan from one of the parishioners to help individuals and families in the community when they don’t have enough food for their next meal.

The parishioner’s idea involved making a “Blessing Box” — a small, stand-alone structure that would be filled with nonperishable food items and toiletries that anyone in need could access at any time of day. The plan also would include placing the “Blessing Box” in a discreet setting on the parish grounds so no one would feel uncomfortable taking items from it.

“Everyone thought it was a great idea,” said Father Marcotte about the parish council’s approval of the plan. “It is an easy way to do one of the corporal works of mercy — to feed the hungry.

“One of the things that’s a reality is that there are always people who slip through the cracks. We’re not trying to be a food pantry. We’re hoping to provide for people who need a meal for their family today. It’s a need we regularly experience.”

The “Blessing Box” is one more way to help people in the community in Clark County, a county where 12 percent of the population and nearly 16 percent of children younger than 18 worry about their next meal, the pastor told The Criterion, newspaper of the Archdiocese of Indianapolis.

Set up in January, the “Blessing Box” was built by a parishioner and has been stocked by donations that include rice, pasta, canned goods, cereal and macaroni and cheese. Personal items such as socks, toothbrushes and deodorant have also been donated.

“People are excited about helping,” said Father Marcotte, who noted that people “often feel overwhelmed by the injustices of the world” that are presented in media reports and social media. “I think it’s important to let people know there’s a way to make a difference. If everyone took responsibility for their neighbors, there wouldn’t be as many problems in the world.”

Students in the parish school also are excited about contributing to the effort, said the priest, who also is pastor of another Jeffersonville parish, St. Augustine.

“One of the nice things is that this is a way everyone can be involved. If someone needs help, it’s available 24/7. And if someone wants to help, they can do it 24/7,” Father Marcotte added. “The Blessing Box is a reminder to people that there’s something we can do.”