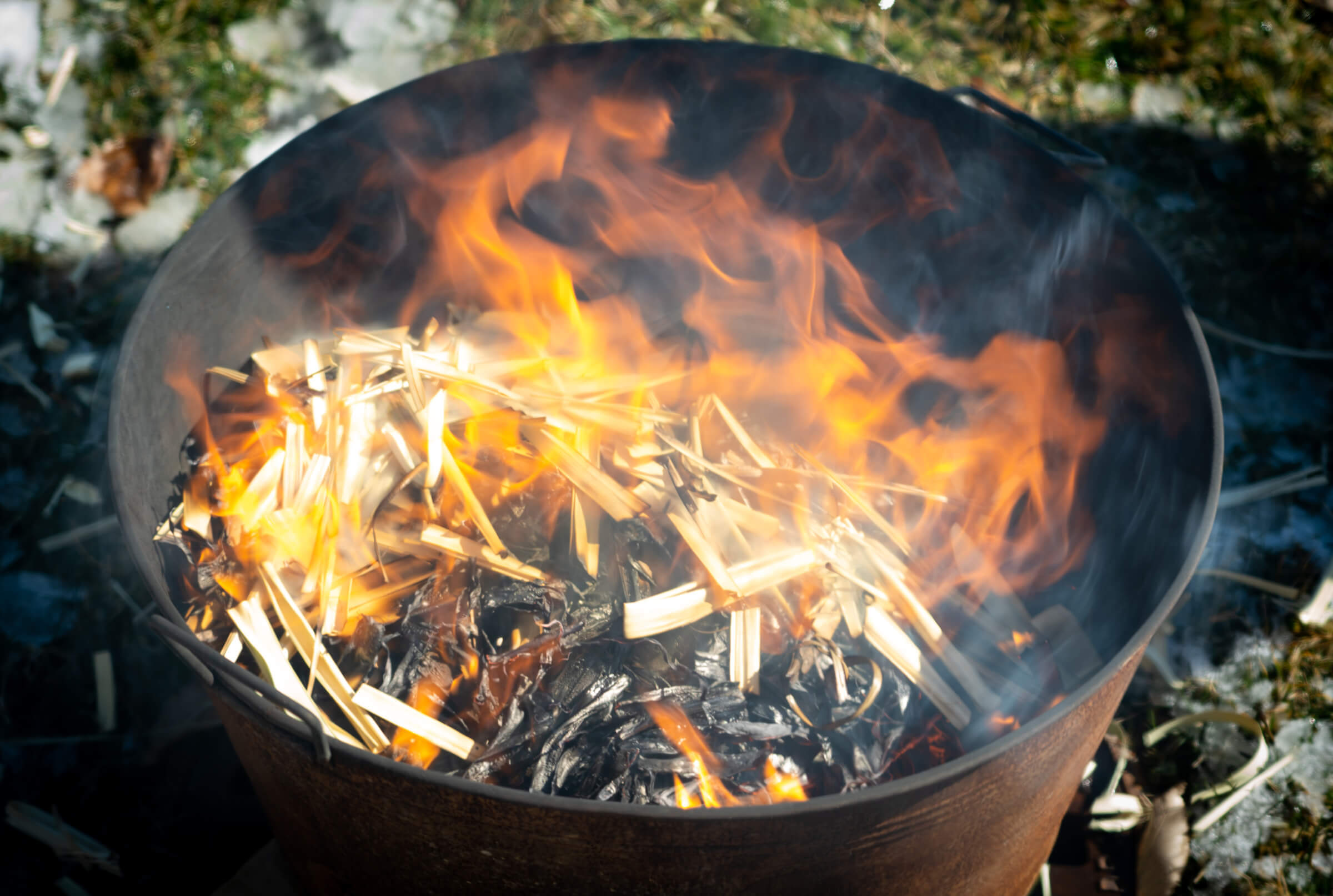 Photo Credit: CNS/Katie Rutter - Palm branches are rapidly diminished to ashes outside of St. Bartholomew Church in Columbus, Indiana, March 4. Parish leaders involve children in their ash-making process to help them understand the meaning of Lent.

Smoke billowed from a small fire pit, rising nearly as high as the steeple of St. Bartholomew Church in Columbus, Indiana.

About 100 students watched from a safe distance March 4 as church staff stoked the flame and periodically tossed in handfuls of dry palm branches.

The smoldering ashes that remained were destined to mark the foreheads of parishioners Ash Wednesday, the beginning of Lent, which is March 6 this year.

Church tradition prescribes ashes used on this day be made from the palm branches blessed on Palm Sunday.

By involving children in the process of creating these ashes, the staff of St. Bartholomew hoped the young people would better understand the rich symbolism contained in the tradition.

“I just think this is such an opportunity to teach them, to get them involved and get them hands-on rather than just talking about it in the classroom,” said Connie Sandlin, coordinator of liturgy at the parish.

Ash Wednesday kicks off the penitential season of Lent, a time when Catholics are challenged to prayer, fasting and almsgiving to express repentance for their sins. Ashes are placed on the foreheads of the faithful to externalize the request for forgiveness.

“It’s a pretty graphic reminder that our time is limited, and that we need to take seriously the Lord’s call to change our lives,” said Father Michael Witczak, associate professor of liturgical studies and sacramental theology at The Catholic University of America, in a phone interview with Catholic News Service.

Father Witczak said the tradition dates back to about the ninth century and evolved from early practices of public penance. Today, creating the ashes from palm branches is meant to emphasize the weakness of humanity.

“We recognize our ability to be people who praise God for his goodness and people who turn our backs on God and when the going gets tough,” Father Witczak said.

Biblical readings on Palm Sunday outline the triumphant entry of Christ into Jerusalem, as well as his rejection and passion, he said.

“This transition from ‘Hosanna!’ to ‘Crucifiy him!’ is part of the reality in those palms,” Father Witczak said, a meaning that is retained even when the palms become ashes.

“They’re kind of like a sign that God’s our king, because that’s what they, the people of the town, did when God made his entrance,” summarized Morgan Johnson, a sixth-grade student who receives religious education at St. Bartholomew Church.

Morgan and eight of her classmates helped St. Bartholomew parishioners complete the first step in their ash-making process March 3.

Announcements made at the parish in prior weeks led parishioners to return enough palm branches to fill six baskets. Staff members knew from experience that long palm strands were difficult to burn, so they enlisted the middle schoolers to cut the branches into smaller pieces.

As the young people worked at the palms, Sandlin and several other religious educators explained the process and symbolism of the ashes. They also challenged the students to commit themselves to charitable actions during Lent.

“It’s important that they learn that the whole celebration of Lent is more than just about giving something up, but it’s about others too,” said Deacon Bill Jones, kneeling on the floor next to the students.

Staff members estimate that they have made their own ashes for at least two decades. While their process has been cemented with repetition, there are no official church guidelines about how the ashes are created.

“There is no required norm for burning the ashes, and there is no specific rite that accompanies it,” Timothy O’Malley, academic director for the Center for Liturgy at the University of Notre Dame, told CNS.

Church law “kind of leaves all of those details to the local church to figure out how they’re going to do it,” Father Witczak said.

At many parishes, the pastor or a staff member burns the ashes without accompaniment. A large portion of churches simply purchase ready-made ashes from a religious goods supply store.

Should ashes need to be disposed, they should be “returned to the ground,” O’Malley said.

To complete the palms-to-ashes transition in Columbus, the sixth-, seventh- and eighth-grade classes from St. Bartholomew Catholic School gathered behind the church building March 4. Deacon Jones led the young people in prayer and a student delivered a short Scripture reading.

Then, the palms were ignited.

“It shows that we are dust and to dust we shall return,” said Ricardo Roman, an eighth-grade student at St. Bartholomew Catholic School. “It’s our soul that matters and we should be focusing on it.”

As the young people watched the palm branches of last year rapidly become the ashes for this year, church staff hoped the children would more easily understand and internalize the external symbol of death and new life.

“It’s all about transition, and so much of their lives are going to be about transition,” said Father Clement Davis, pastor of St. Bartholomew. “Dying to one thing so that one can embrace something new.”

Palm Sunday, which marks the end of the penitential season of Lent, will be April 14.