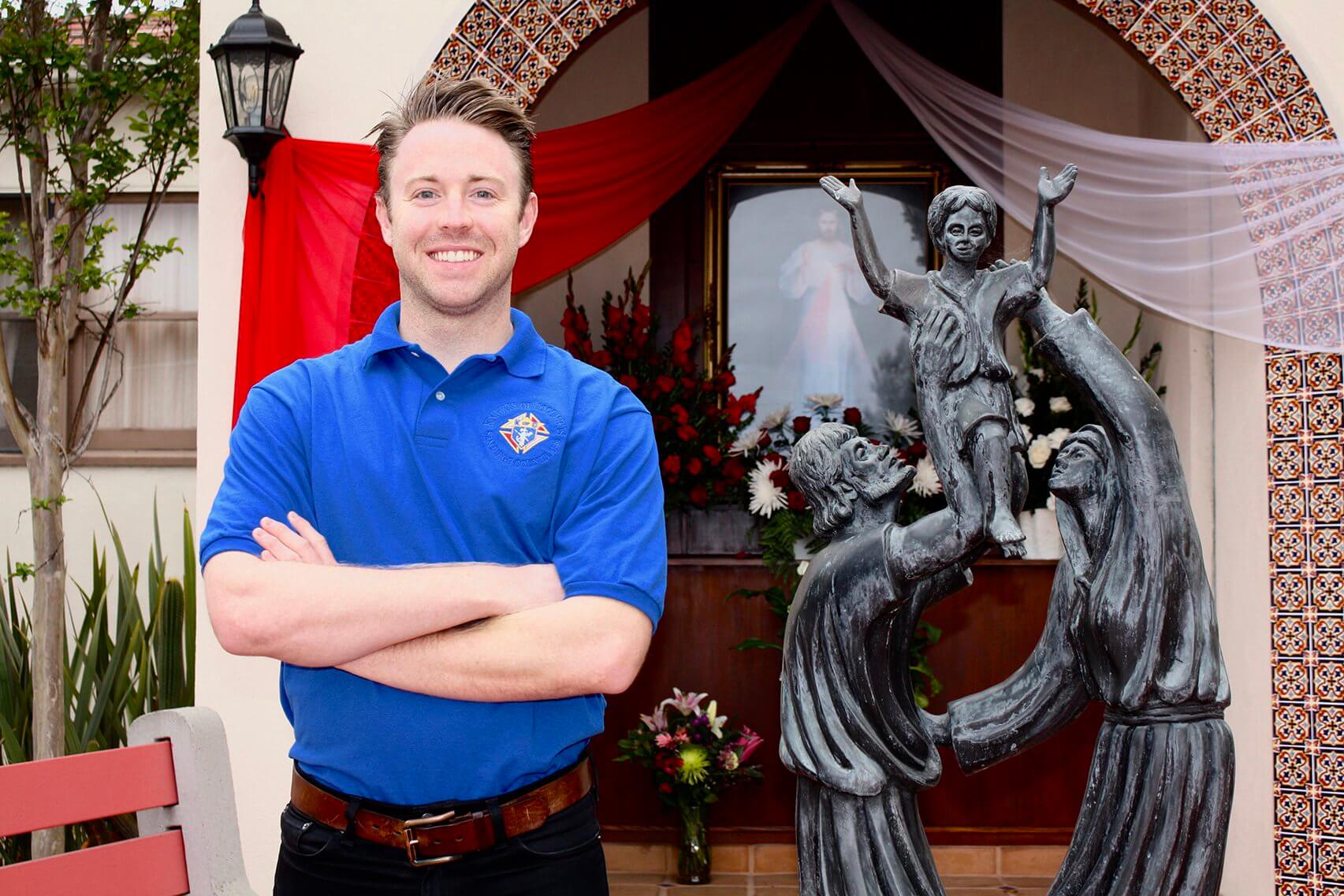 Photo Credit: CNS/Aida Bustos, The Southern Cross - Mick Hammock poses for a photo in the prayer garden at St. Didacus Parish in San Diego. The 29-year-old is the Grand Knight of Council #1349.

At 29, Mick Hammock is the young face of San Diego’s oldest Knights of Columbus council.

Hammock, who serves as grand knight of Council 1349, has brought the passion and perspective of a young adult to his leadership role.

His proud association with the Knights of Columbus and its values serves as a convincing rebuttal to anyone who might be tempted to write off the Catholic fraternal organization as some sort of old-timers’ club. The number of younger men who have joined the council over the past year at his invitation testifies to the fact that they too see a place for themselves in the organization.

“I know for a fact it’s helped strengthen my faith,” Hammock said of his involvement with the Knights, and he has found it “unbelievably rewarding” to help fellow Knights deepen their own faith.

Council #1349, which was established in 1908 as the first in the region, represents six central San Diego parishes.

Tom Davis, president of the San Diego Diocese Chapter of the Knights of Columbus and a two-time past grand knight of the council, recognized Hammock’s potential and asked him last year to consider becoming the next grand knight.

“I liked how Mick wears his Catholicism on his sleeve, how he’s a leader in our faith first,” said Davis, 53, who has been a Knight for 27 years.

Though Grand Knight was not a job that Hammock had been angling for, he accepted the offer and began a one-year term last June. He is open to a second term.

Davis had some advice for Hammock before his taking over.

“I told him that the council is his, it’s not ‘owned’ by the old guard, and to plan programs and take this council where it needs to be today,” Davis said.

“It was wonderful for us to have a younger man in charge, one with new perspectives, with new ideas, and with friends who might do charity differently than we have in the past,” Davis added.

For his part, Hammock has enjoyed collaborating with the council’s more seasoned members, whom he praised for their “wealth of experience” and “zeal … for serving others.”

But believes that “the younger generation has something to bring, too.”

Hammock said his main contribution has been providing more opportunities for members to grow in their faith, an interest that he carried over from his previous assignment as the council’s program director.

“I was really focused on the faith component,” he explained, because the council already had a demonstrated commitment to service projects.

Hammock has been leading the Knights’ weekly rosary before the Tuesday evening Mass at St. Didacus for about two years. Under his watch, Council 1349 also has hosted evenings of eucharistic adoration; prayer vigils outside of Planned Parenthood facilities; a yearlong men’s spirituality program and an opportunity for members to consecrate themselves to St. Joseph after about a month of spiritual preparation.

Hammock’s involvement with the Knights dates to 2009 when, as an 18-year-old University of Notre Dame student, he joined the council on campus.\

Though a dues-paying member, he was not particularly active with the Knights while at Notre Dame. But, about three or four years ago, during a Knights of Columbus membership drive outside St. Didacus Church, he officially transferred to Council 1349.

At that time, Hammock was transitioning out of Catholic young adult groups and looking for the next step in his faith and service journey.

The Knights of Columbus seemed like the perfect fit.

He joined the Knights, seeking to be with “a group of like-minded men” where he could grow in his faith and give back to the community.

While Knights in general tend to skew older, with many members already married men with families, Davis said almost all of those who have joined Council 1349 during the last year have been young adults.

“Just because many of us are Gen X or older doesn’t mean the Knights is only for those generations,” said Davis, who credits Hammock with “helping turn (around) that idea that we’re this old group that is irrelevant to a younger demographic. We are very relevant.”

Hammock is convinced that young men are needed to come in and to take up the mantle of faith, service and fraternity as Knights.

“Our church needs strong male leadership right now,” he said, “and the Knights of Columbus (is) a great place to start.”