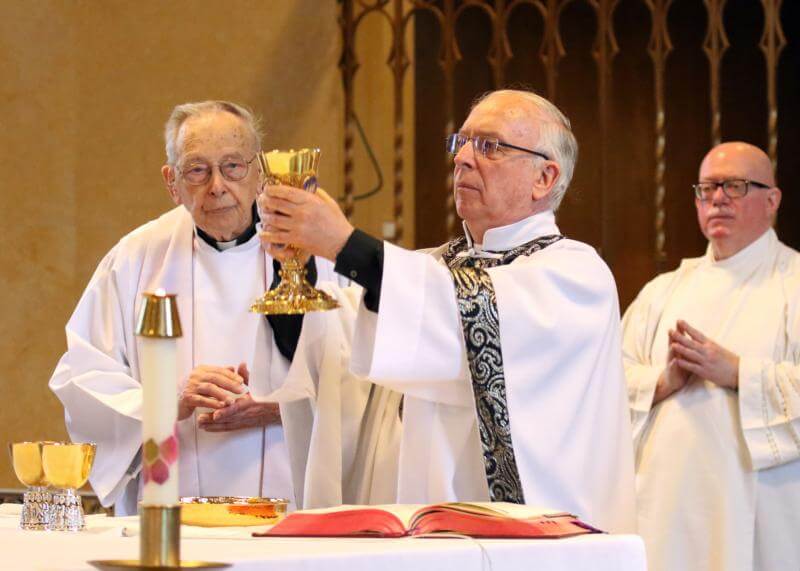 One hundred years after receiving Vatican approval to begin missionary work in China, the Maryknoll Fathers and Brothers recalled the “original inspiration and holy stubbornness” of the society’s founders during a celebratory centennial Mass April 2 in Maryknoll, New York.

Father Raymond J. Finch, Maryknoll superior general, was the main celebrant of the Mass at the Queen of Apostles Chapel at the Maryknoll Society Center.

Flags of many of the 47 countries where Maryknoll missioners have served were attached to pillars in the chapel as a reminder of the organization’s efforts to evangelize and strengthen the local church in Asia, Africa and Latin America.

Maryknoll, properly known as the Catholic Foreign Mission Society of America, was established in 1911 by the bishops of the United States to recruit, train, send and support American missioners overseas.

Father Finch recounted the “epic journey to Asia” made by Bishop (then-Father) James E. Walsh. At the time, mission territories were assigned by the Vatican Congregation for the Propagation of the Faith. Bishop Walsh had to negotiate with other mission groups to cede areas of responsibility to Maryknoll before seeking Vatican approval. The process took seven years and was concluded in April 1918.

Father Finch said it is “difficult to fully comprehend the patience, confidence and stubbornness needed by the first Maryknollers. The temptation is to pass over the obstacles and challenges and even to make light of incredible difficulties they faced.”

He said they dreamed of enabling the U.S. Church to participate in the universal mission of the Catholic Church “to bring the good news to the farthest reaches of our world.” They pursued that dream in the face of many challenges and difficulties” including internal disagreements and political, economic, social and ecclesial issues, he said.

Maryknoll was established when the church in the United States was expanding to serve the new waves of poor Catholic immigrants, Father Finch said.

The first Maryknollers were convinced, as Bishop Walsh often reminded his fellow prelates, that the only way the Catholic Church at home would meet its own needs for priests and religious was by being generous in sending them in mission to places they were needed even more, he said.

The world, the Church and mission have changed over the last hundred years, Father Finch said.

“Mission is not just from the ‘Catholic’ world to the ‘pagan’ world,” from the West to the East, and from the North to the South, he said.

“Today, mission is from everywhere to everywhere,” and the Congregation for the Evangelization of Peoples no longer assigns territories for mission, he said. Mission is the basic vocation of every Christian, “yet as much as mission has changed, the essentials remain the same.”

It is still true that mission is about sharing the faith and the Good News and about looking beyond ourselves and our very real needs to respond to the needs of others from the person next to us to the person on the other side of the world, Father Finch said.