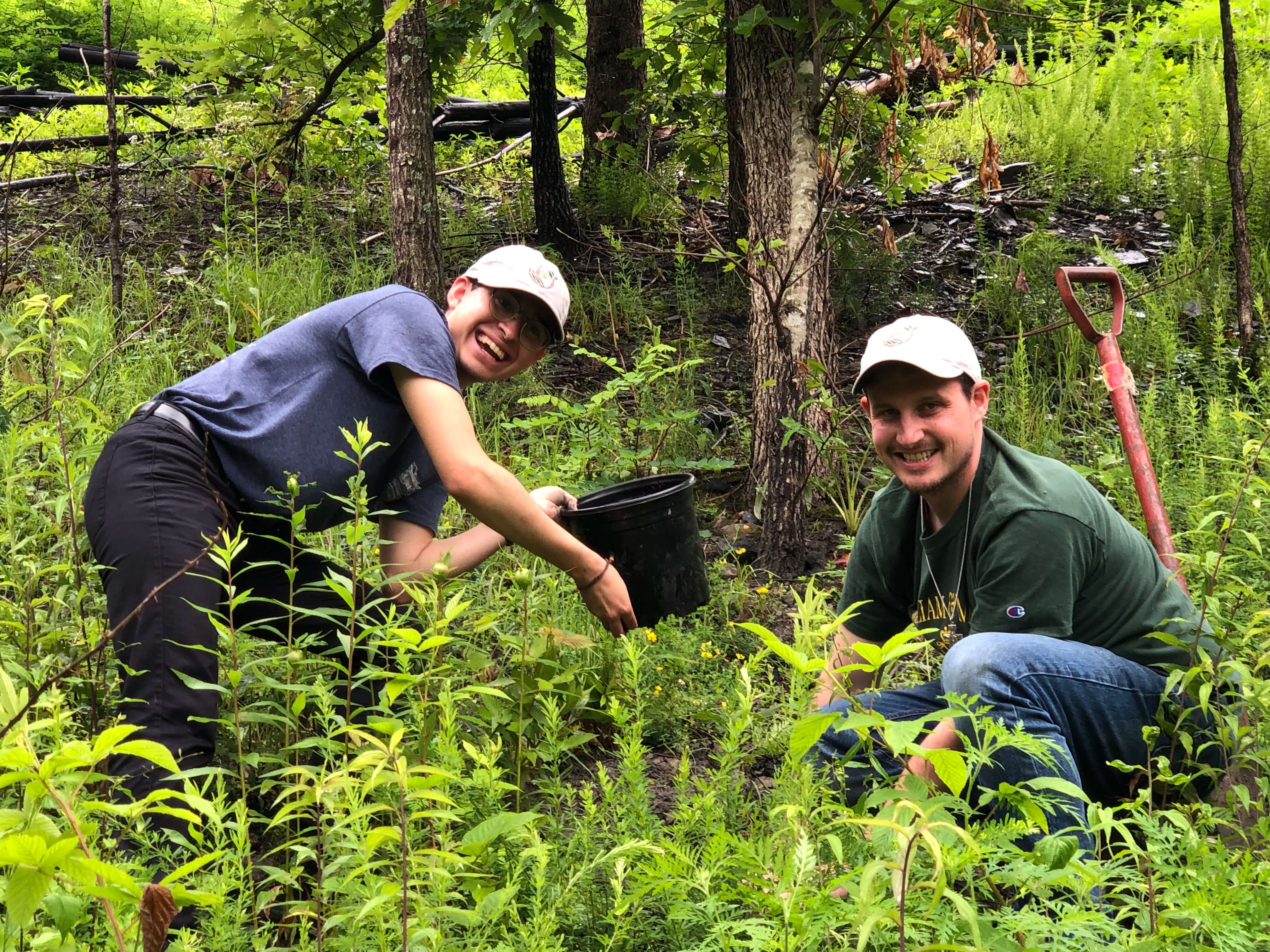 Photo Credit: CNS/courtesy Franciscan Friars Conventual - Jason Warrer and Rich Rome, both Conventual Franciscan seminarians, plant an oak tree in the Robinson Forest in eastern Kentucky in June as part of a reforestation effort on land being reclaimed from the effects of mountaintop removal coal mining. The planting experience was part of the order's summer service program designed to help men preparing for the priesthood to explore the connection that people have with the land.

It started by talking with visitors to the Shepherd’s Table meal program at Our Lady of Hope Parish in Coal Township, Pennsylvania, outside of the eastern town of Shamokin, and learning about people’s sense of place in the once-burgeoning coal mining region.

From there, they moved on to planting trees in Robinson Forest in eastern Kentucky in an effort to reclaim a mountaintop stripped bare by coal mining. They learned, too, that the forests were shrinking because of the mining, leaving fewer nesting areas for the migrating Cerulean warblers from Colombia.

The connection deepened during a hike in an old-growth forest in Colombia, one of the warbler’s wintering homes. By the end, Father Lasky saw how the young friars began to better see their connection as part of God’s creation.

The venture — including time in El Salvador and New Mexico — was designed to help the seminarians become “lesser before God” and to listen the stories of the people, seeing connections across land and community.

“I want them as a minister when they’re done with the seminary training to look beyond the collar and see themselves as a member of the community in a holistic sense … that they are interwoven in all of this,” said Father Lasky, director of Justice, Peace and Care for Creation Ministry for his order’s Our Lady of Angels Province based in Ellicott City, Maryland.

It’s that sense of interconnectedness that all people are called to understand and live that underlies the recently released report by the Intergovernmental Panel on Climate Change on global land usage, in Father Lasky’s view.

In its report, the IPCC — the United Nations body assessing the science related to climate change — examined the growing human impact on land and how climate change compounds the stresses placed on land around the world: degradation, soil depletion, flooding and water shortages.

The report determined that only by reducing greenhouse gas emissions from all sources — including land use and food production — can global warming be kept well below 3.6 degrees Fahrenheit, the target set in the 2015 Paris climate accord to avoid catastrophic effects on the environment.

Scientific studies have found that global temperatures are about 1 degree Fahrenheit higher than 100 years ago and suggest that the burning of fossil fuels, land clearing, agriculture and other human activities are the primary sources of global warming.

“There are some huge challenges here. The report says we have to undertake fairly quickly a massive rethinking about how we use our land globally,” said Dan Misleh, executive director of the Catholic Climate Covenant.

Father Lasky and others told Catholic News Service the need for sustainable land use practices is crucial, especially in an era when land is viewed primarily as a commodity without regard to the needs of local communities or the future of the planet.

“Our main approach is improving natural resource management because that is what poor people depend on mostly,” he said.

Although thousands of small farmers have seen their crop yields increase through sustainable practices, problems persist because of the widespread desire to exploit land for economic gain, said Michael Schuck, associate professor of theology and co-director of the International Jesuit Ecology Project at Loyola University Chicago.

“The number one environmental crisis going on, now of all, where the most environmental activism is taking place worldwide, is not with respect to climate change, but the question of land grabbing,” Schuck told Catholic News Service.

Among others, he cited areas of Honduras and Guatemala where forests are being bulldozed and replaced with tracts of palm trees to meet the growing worldwide demand for palm oil.

“We have a production system that doesn’t respect land as a living breathing entity,” he said. “It has commodified it.”

Schuck and others said they do not outright oppose profit-making, but rather they echo the call of Pope Francis in his 2015 encyclical, “Laudato Si’, on Care for Our Common Home,” to recognize that the long-term future of Earth is at stake unless practices related to high consumption and natural resource exploitation change.

The IPCC report said much the same, projecting that food production will suffer if unsustainable land use persists.

“No one knows the conflicts between food, fuel and forests better than indigenous people and local communities. Indigenous and local people continue to face murder and criminalization when we face agro-industry, mining, logging and infrastructure projects that threaten our forests, our lives and the animals and plants we protect,” she said during a news conference Aug. 8 at which the report was released.

Nowhere is such land conflict better exemplified than in the Amazon forest of Brazil. A recent announcement by President Jair Bolsonaro’s administration declared that Brazil will open indigenous lands — primarily in the Amazon region, where 60 percent of the country’s indigenous people live — to mineral exploration.

“Our mission is to defend Mother Earth, to defend nature,” she said. “When we do this, we not only benefit the indigenous people, but we benefit everyone. They want to make them believe that indigenous people no longer need land.”

Further, German climatologist Hans-Otto Portner, vice chairman of an IPCC working group, said in early August that the new Brazilian policies represent the opposite of what the IPCC report recommends.

In Africa, Father Charles Odira, of the Kenyan bishops’ conference, chairs the Kenya Interfaith Network of Action on the Environment. He told CNS climate change is disturbing the normal planting schedule for local farmers. Rains that once fell in February now have shifted by as much as a few weeks, he said.

In addition, the unpredictability of water access causes some herding communities to expand where their herds of cattle graze, leading to confrontations over the land, he said.

But there are successes. Father Odira recalled meeting one man during a pastoral visit in the territory covered by his parish in the Diocese of Homa Bay who managed to boost millet and corn yields significantly. Asking how, Father Odira learned that the man had implemented new practices on his arid land and he asked the farmer to share those practices with others.

“From the church’s perspective, it’s better,” he explained. “You can reach more families. And with the Church involved, people trust it more.”

Schuck told CNS that kind of understanding and cooperation is needed on a broad scale and that it must begin immediately.

“There’s a reason for hope, but the timing is so critical,” he said. “Do we have the time needed to slow us down before the precipice?”

—Contributing to this story was Lise Alves in Sao Paulo.