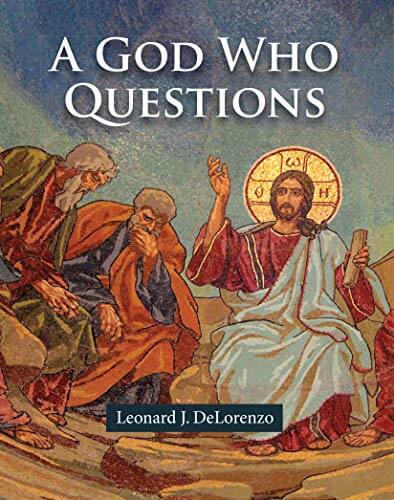 Book review: ‘A God Who Questions’

It might seem somewhat unusual that a book, which is very much about Jesus, would initially remind me of the classical Greek scholar Socrates, who lived and died some 400 years before Christ. To be perfectly honest, however, it wasn’t so much Socrates himself who came to mind as it was his method of teaching; rather than lecture his students, this philosopher would instead pose questions to them. Then, when they had answered, he would question their answer – sometimes many times over – in order to draw them into deeper and more insightful reflections than they had arrived at in their initial responses. This could be both enlightening and, on occasion, uncomfortable for them.

In his new book, “A God Who Questions,” author Leonard J. DeLorenzo has chosen 20 such questions, all posed by Jesus in the Gospels, in order to do something similar for us. These questions, he maintains, are being asked of us today just as much as they were asked of the people of Jesus’ time and, as was the case for them, they are designed to elicit more than a surface response from us. We are supposed to be deeply challenged by them. “If we find that the questions of Jesus are just what we expected, then we can be sure that we didn’t hear him correctly,” DeLorenzo says. “Instead, this book represents a concerted attempt to really listen and to allow Jesus’ questions to disturb me, awaken me, locate me, and transform me.”

Each question, which appears in the context of the Gospel passage in which it occurs, is then followed by a short reflection, some as brief as three pages, and others running to seven or eight.  After that, the author concludes each chapter with a very short prayer.

The book’s structure makes a complete circle; DeLorenzo begins and ends his book with a variation on the same question. “What do you seek?” is what Jesus asks the disciples in the first chapter of John’s Gospel, and “Whom do you seek?” is asked of Mary Magdalene in the 20th chapter of the same Gospel. This is ultimately the question which all the other questions point to and is, as the author notes, the thread which runs throughout John’s Gospel. “He asks those first two followers what they are seeking, or, rather, how they will receive him,” he says. “He asks the soldiers in the garden. He asks Mary outside the tomb. The Word who was in the beginning and who came into the world to save the world humbles himself before our response. He is the question.”

The author does not draw solely from the Gospel of John, but includes Jesus’ questions as they appear in the Synoptic Gospels (Matthew, Mark and Luke) as well.  Readers will find that, even though DeLorenzo has chosen questions we may think we know the answers to (sheer familiarity and repetition can sometimes lead us to gloss over both the text and its meaning) there is far more here than has previously met our eyes and hearts. To truly enter into the questions, as we are invited to do, is not for the faint of heart, because we risk being changed by them. “So here is a word of warning: If you want to remain comfortable, do not let Jesus ask you questions,” DeLorenzo concludes. “If you take these questions seriously, you will become just like those whom we hear about in the Gospels, whose commonplace ways of thinking were overturned. His questions reveal the hidden secrets of people’s hearts and reset the cozy encounter they thought they would have with him. The new level of encounter is one that he himself establishes. His questions provoke an examination of conscience and demand a greater openness to his divine mission. No one is on secure ground when Jesus starts asking questions.”

Leonard  DeLorenzo, Ph.D., serves in the McGrath Institute for Church Life and teaches in the Department of Theology at the University of Notre Dame.

In addition to writing books, articles and essays, he speaks regularly in academic and pastoral settings on the saints, Catholic education, vocation and discernment and the theological imagination, among other topics.

He is currently editing and contributing to a volume dedicated to Dante, mercy and the beauty of the human person.