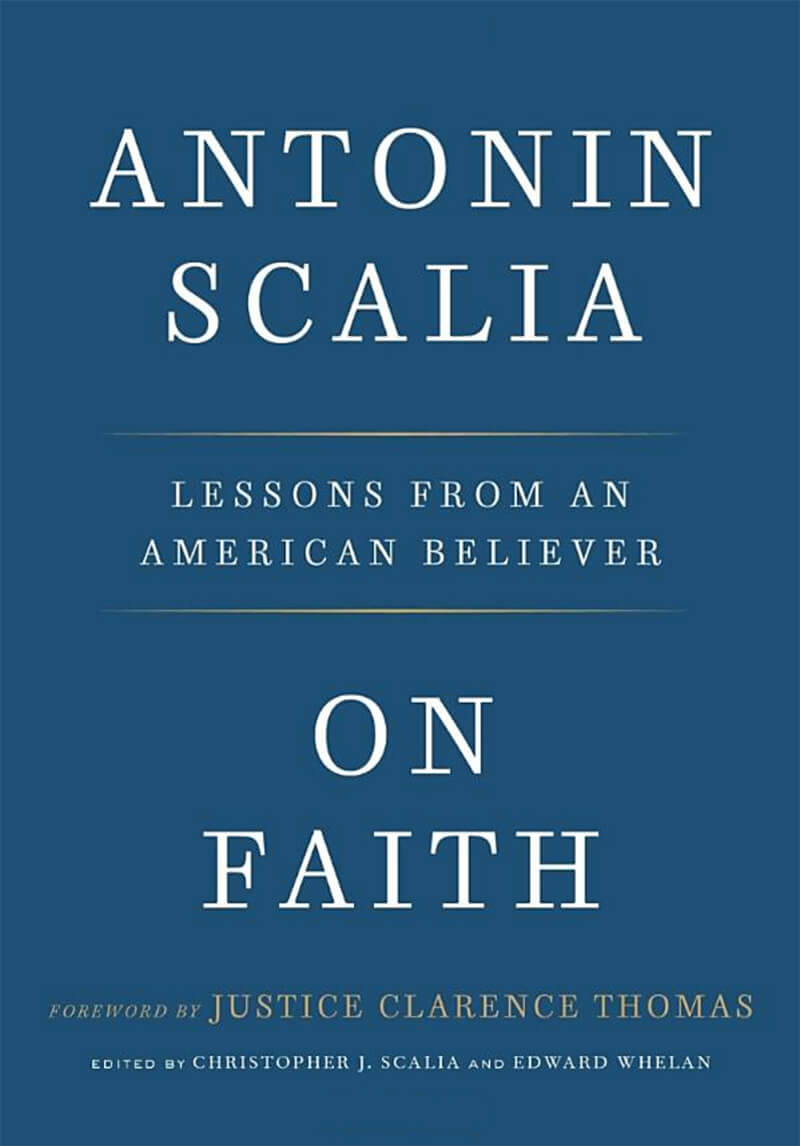 Book review: ‘On Faith: Lessons from an American Believer’

This is a thoughtful book, which should come as no surprise considering it is comprised, in large part, of the opinions of one of the most influential U.S. Supreme Court justices of the modern era. Although a previous volume of Antonin Scalia’s speeches was compiled by his youngest son, Christopher, in 2017, this collection, “On Faith: Lessons from an American Believer,” focuses exclusively on the justice’s thoughts and feelings about the place of religion in both American culture and the law.

While informed by his own convictions as a devout Catholic, Scalia approaches his subject — as we would expect — from the point of view of both historical precedent and the Constitution of the United States. As such, he addresses not only his own faith but the faith of all believers, primarily in the context of the First Amendment, which reads in part: “Congress shall make no law respecting an establishment of religion, or prohibiting the free exercise thereof. … ”

As an originalist — which means someone who interprets the Constitution based on the original understanding of the authors or the people at the time it was ratified —Scalia argues the case that faith in a Supreme Being has been a fundamental component of American culture from its founding, and we eschew that fact to our peril. At the same time, he affirms that the Constitution also forbids the favoring of one particular form of worship above and at the expense of others.

In the third section of the book, entitled “Public Lessons for Americans,” Scalia expands on those views. “This religious tradition of ours has consistently affirmed a national belief in God — but not a national belief in a particular religion,” Scalia said at a Marine Corps prayer breakfast in 1998. “That has been the key distinction: between official encouragement of religion, which was always practiced, and official favoritism of particular religious sects, which was prohibited.”

Scalia then goes on to cite three Supreme Court cases: McCreary County v. ACLU (2005) which dealt with the public display of the Ten Commandments, Lee v. Weisman (1992), which argued the right to public prayer, and Locke v. Davey (2004) which ruled on equal treatment for religious citizens in which this very question was argued. What appears in this book are Justice Scalia’s dissenting opinions in each of these rulings.

Although the study of the law in this context is quite compelling, there are more than legal arguments presented in this collection. In the section entitled “Personal Lessons for Christians,” Scalia discusses at length what his own identity as a Catholic has meant in his life. In one talk, in which he speaks of “The Christian as Pilgrim,” he notes, “It becomes quite obvious why the serious Christian must be a pilgrim, an alien citizen, a bit ‘different’ from the world around him, when one considers how many Christian virtues make no sense whatever to the world. … When the values of Christ and of the world are so divergent—so inevitably divergent — we should not feel surprised if we find ourselves now and then ‘out of step.’ In fact, we should be worried if we are never that way.”

Finally, in the section entitled “Political Lessons for Believers,” he discusses the issues that arise between Christians and the authority of the state. “In sum, our American tradition that church and state are separate is in my view an authentically Christian tradition as well,” Scalia told an audience of American Catholics in Rome in 1989. “There are good religious reasons for it as well as good political reasons; the confusion of the two hurts both.”

For those who are familiar with Scalia — and especially for those who aren’t — this book is an intriguing look at the faith and philosophy of one of modern America’s most influential jurists.

In 1986, President Ronald Reagan nominated Antonin Scalia to the Supreme Court of the United States, to which he was confirmed by the Senate, 98–0. Scalia took his seat on the bench on Sept. 26, 1986, where he served for nearly 30 years before his death on Feb. 13, 2016.

A devout Catholic, Scalia was married to his wife, Maureen, for 55 years; together they had nine children and dozens of grandchildren.