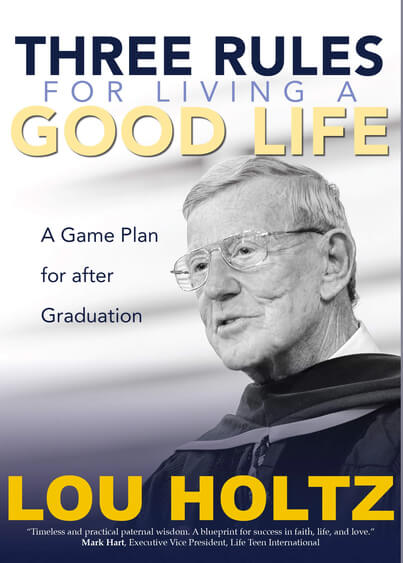 Book review: ‘Three Rules for Living a Good Life: A Game Plan for after Graduation’

Anyone who was a football fan in the ‘80s and ‘90s — particularly of Notre Dame’s Fighting Irish — is familiar with the name Lou Holtz. The former head football coach at the University of Notre Dame from 1985 to 1996 and analyst for sports channel ESPN was famous for giving winning advice both in the locker room and on the field.

Now, Lou Holtz is coaching a different game; in his new book, “Three Rules for Living a Good Life: A Game Plan for after Graduation,” he shares the lessons he has learned through the years — sometimes the hard way — and his sheer experience speaks for itself. “I have been your age,” he begins, “whether you are twenty-one, or twenty-five, or even eighteen. But most of you have not lived in your ninth decade like me!”

Like any great coach, Holtz does not waste words. The book, which is only 97 pages long, is delivered in a style reminiscent of a pre-game pep talk. The advice is succinct, and the stories, which Holtz relates from his own life, both humorous and direct. It does not take long to read, but that is a plus because I suspect most people will return to its pages more than once to remind themselves of an important point that coach made.

Holtz’s three rules, like all good rules, are simple and easy to remember: first, always do what is right. “How do you know what is right?” Holtz asks. “The answer is one you have heard many times. It comes directly from the Bible. Jesus said, ‘Do to others whatever you would have them do to you.'”

The second is also disarmingly simple: Do everything to the best of your ability. “Doing everything to the best of your ability is not an automatic function,” Holtz continues. “It doesn’t happen by magic. … You build a successful life one choice at a time. … You alone have the have the freedom to choose between good and bad. This freedom is one of God’s greatest gifts.”

It doesn’t take long to realize that simple is not the same as easy, and Holtz’s own humility is evident in the stories he tells about the many times he himself has failed. In fact, despite the numerous accolades he has received throughout the years, one of his greatest gifts is his ability to not take himself too seriously.  “They put a statue of me outside of Notre Dame Stadium,” he says near the end of the book. “I guess they needed a place for the pigeons to land.” It is the words on the base of the statue, however, that capture what Coach Holtz’s life has ultimately been about: trust, love and commitment.

The Appendix, which is worth printing out and posting somewhere where it will be seen, are Ten Great Lou Holtz Quotations, which sum up his life and his philosophy. If you read nothing else in this book, be sure not to miss the last two pages.

Before ending his talk — because that is how this book reads — Holtz has one more important piece of advice to pass on: “I cannot emphasize enough how important it is to have dreams and goals,” he says. “Dreams make things happen.” He then ends with a blessing for each and every reader: “I will pray for you and your success. I wish you all the best.”

Lou Holtz is a Hall of Fame college football coach who served as the head football coach at the University of Notre Dame from 1985 to 1996, leading the Fighting Irish to the consensus national championship in 1988.

Inducted into the College Football Hall of Fame in 2008, he has been honored not only for coaching but also for his philanthropy.

Holtz and his wife, Beth, have four grown children. They live in Orlando, Florida.

Members of the first class to graduate from the reopened St. Michael’s High School in Brattleboro [...]