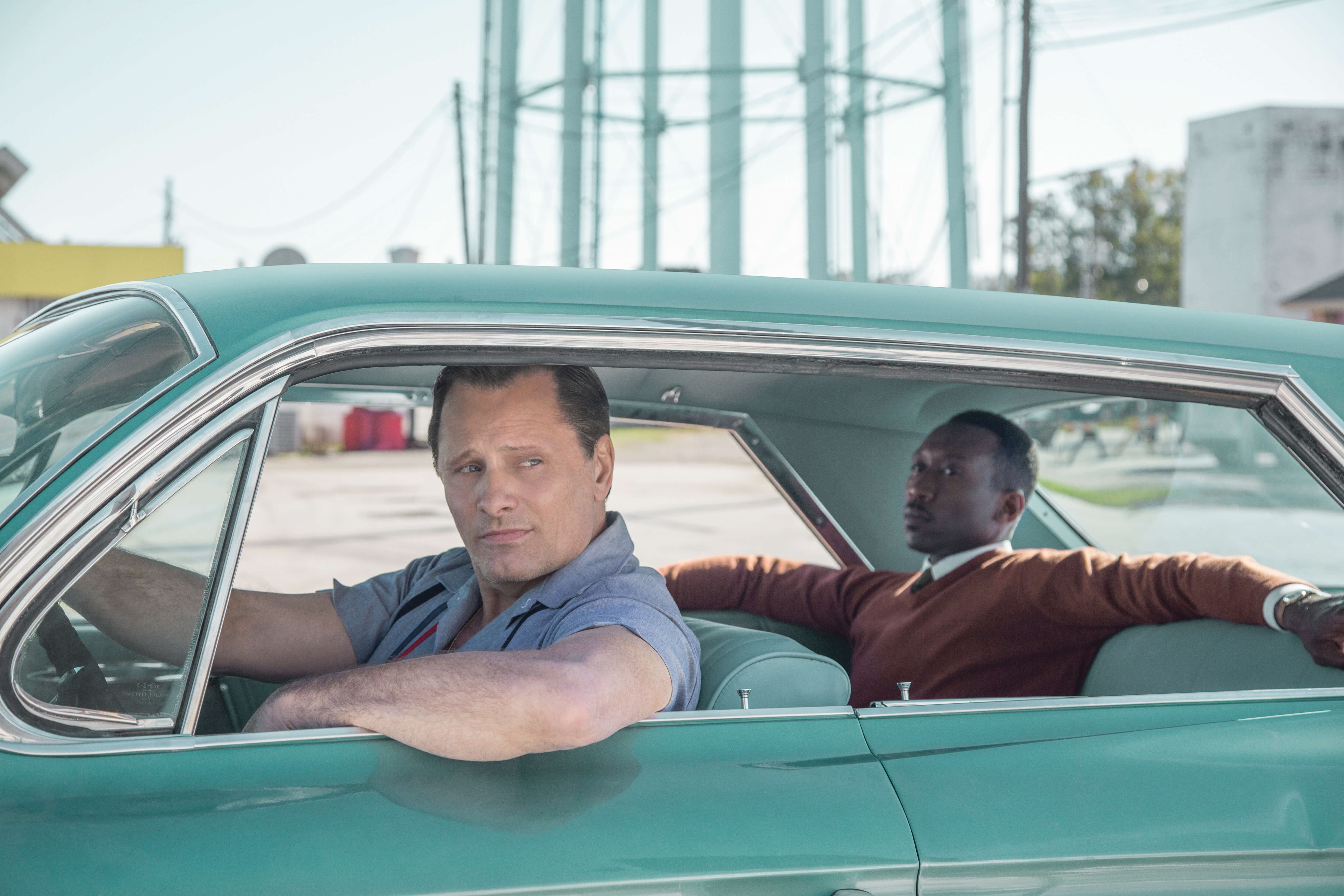 Photo Credit: CNS/Universal Studios - Viggo Mortensen and Mahershala Ali star in a scene from the movie "Green Book." The Catholic News Service classification is A-III — adults. The Motion Picture Association of America rating is PG-13 — parents strongly cautioned. Some material may be inappropriate for children under 13.

“Green Book” (Universal) opens with a singer in the Copacabana nightclub in New York belting out “That Old Black Magic.” Therein lies its flaw.

This high-minded saga of race relations in 1962 is hobbled by sentimentality thicker than the marinara sauce that occasionally appears. It doesn’t so much lean into stereotypes as take flying, cringe-worthy leaps.

The film is well intentioned, though generally morally sound and assiduously correct in the tiny details of what a long road trip through the rigid segregation of the American South would have been like. It’s also a virtual thesaurus of vicious racist invective.

With its perspective coming only from a bigoted white man trying to understand an African-American, “Green Book” distills “learning” into pat “lessons” about being one’s “authentic” self, which includes a scene in which the black man is “taught” to appreciate fried chicken.

It’s based on a real concert tour taken by pianist Don Shirley (Mahershala Ali) in the company of Anthony “Tony Lip” Vallelonga (Viggo Mortensen), an assistant maitre d’ at the Copacabana. Shirley was famous at the time for his recordings of jazz and show tunes (since, in that era, promoters thought audiences wouldn’t accept a black classical musician).

Vallelonga, who would later become an actor, notably on “The Sopranos,” needs temporary work while the Copacabana is shuttered for renovations. He’s also the chauffeur for club owner Jules Podell (Don Stark), who lines him up with the driving job for Shirley’s trio.

“Do you foresee any issues in working for a black man?” Shirley asks on their first meeting, in his lush apartment above Carnegie Hall.

Vallelonga shrugs and jokes, “Why, we bringing broads?”

The other two drive a rented Cadillac. Tony chauffeurs Don in another, and is equipped with the Green Book, the “Vacation Without Aggravation” guide — published for decades — to lodging, restaurants and even gas stations where black patronage was welcomed. Unspoken the entire time is the knowledge that Tony’s along not just to drive but to be a bodyguard when necessary.

The book itself doesn’t come into much use. Rather, director Peter Farrelly, who co-wrote the screenplay with Vallelonga’s son, Nick, and Brian Currie, shows the journey as a series of individual challenges, depending on the venue.

Vallelonga, portrayed as so casually prejudiced that he tosses out two drinking glasses used by black plumbers working at his home, and Shirley, fastidious and snobbish, have to overcome their distrust and cultural boundaries.

Vallelonga doesn’t have to use muscle very often. That works with a racist stagehand who puts trash in a piano. It doesn’t work so well on police in Mississippi after Vallelonga slugs one of them. But Shirley uses his fame, makes a phone call to Attorney Gen. Robert Kennedy, and the two men are instantly released.

Early on, Vallelonga writes about Shirley to his wife, Dolores (Linda Cardellini), that “he plays like Liberace, but better.” The comparison is a clue. Later, Vallelonga’s quick intervention is needed when Shirley is nearly arrested in Memphis for a homosexual encounter at the YMCA. Simple bribery of police solves the matter.

It’s the only time that part of Shirley’s life is discussed, and it’s fleeting. For someone established as a bigot at the opening of the movie, Vallelonga is quite relaxed when it comes to sexual mores.

“Green Book” has merit despite its defects, although it’s never clear that either character is experiencing anything along the lines of personal growth, and its ending seems borrowed from “Trains, Planes and Automobiles.” Adults who can navigate plot twists and turns and a lot of food jokes are likely to enjoy it.

The film contains pervasive racial slurs, references to homosexuality and fleeting rough language. The Catholic News Service classification is A-III — adults. The Motion Picture Association of America rating is PG-13 — parents strongly cautioned. Some material may be inappropriate for children under 13.