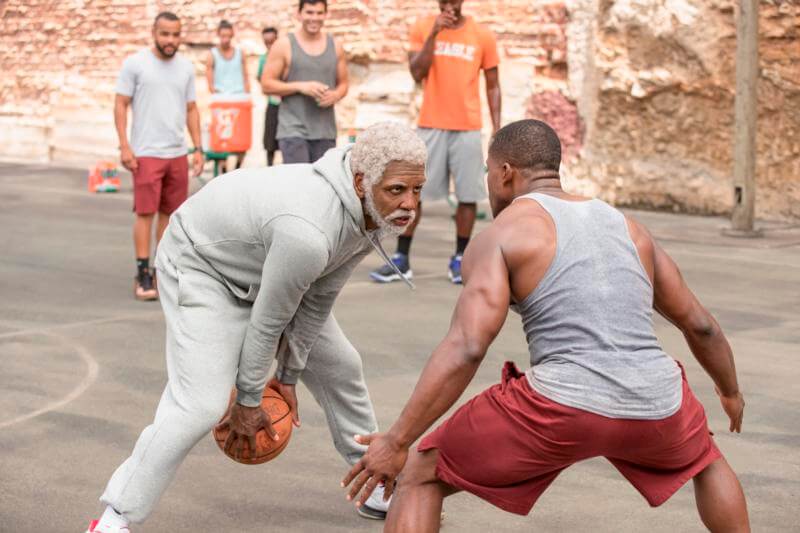 Photo Credit: CNS photo/Lionsgate - Kyrie Irving stars in a scene from the movie "Uncle Drew." The Catholic News Service classification is A-III — adults. The Motion Picture Association of America rating is PG-13 — parents strongly cautioned. Some material may be inappropriate for children under 13.

NBA fans will likely appreciate the mostly harmless sports comedy “Uncle Drew” (Summit). Viewers without a passion for the game and its attendant culture may be less indulgent.

Director Charles Stone III blends court heroics with riffs on everything from Dax’s physique and the easily aroused temper of henpecked Preacher’s tough spouse, Betty Lou (Lisa Leslie), to the quirks of the aged. He even throws in a spontaneous dance competition. But the sum of his ingredients is not overly satisfying, especially given the hard-to-swallow premise pitting geriatrics against more typically youthful players.

Teamwork and self-confidence are celebrated in Jay Longino’s script which also offsets the fun it pokes at Pentecostal exuberance with brief affirmations of Christian faith. In one scene, for instance, receiving the gift of a gold cross to wear around his neck, Preacher, a real minister, reverently kisses it.

Similarly, Dax’s initial relationship with sassy live-in girlfriend Jess (Tiffany Haddish) gives way to a much more restrained bond with Boots’ granddaughter, Maya (Erica Ash). Things get a bit more wayward in outtakes accompanying the closing credits, with one showing a female character jokingly taking a whip to the underwear-clad backside of a male cast member.

It’s a blink-and-you’ll-miss-it moment. But it’s also an indication that this is not a good choice for the whole family, especially as it’s both preceded and followed by a similarly swift sight gag involving a hospital gown that fails to cover a patient’s rear end.

Grown moviegoers will find that such moments are compensated for by the good-hearted tone of the proceedings as a whole. While generally genial, however, “Uncle Drew” is no more than a passable bit of entertainment.

The film contains a glimpse of aberrant bedroom behavior played for laughs, fleeting male rear nudity, cohabitation, references to promiscuity and premarital relationships, some sexual and mildly irreverent humor, at least one use each of profanity and crude language, numerous milder oaths, a bleeped F-word and several crass terms. The Catholic News Service classification is A-III — adults. The Motion Picture Association of America rating is PG-13 — parents strongly cautioned. Some material may be inappropriate for children under 13.