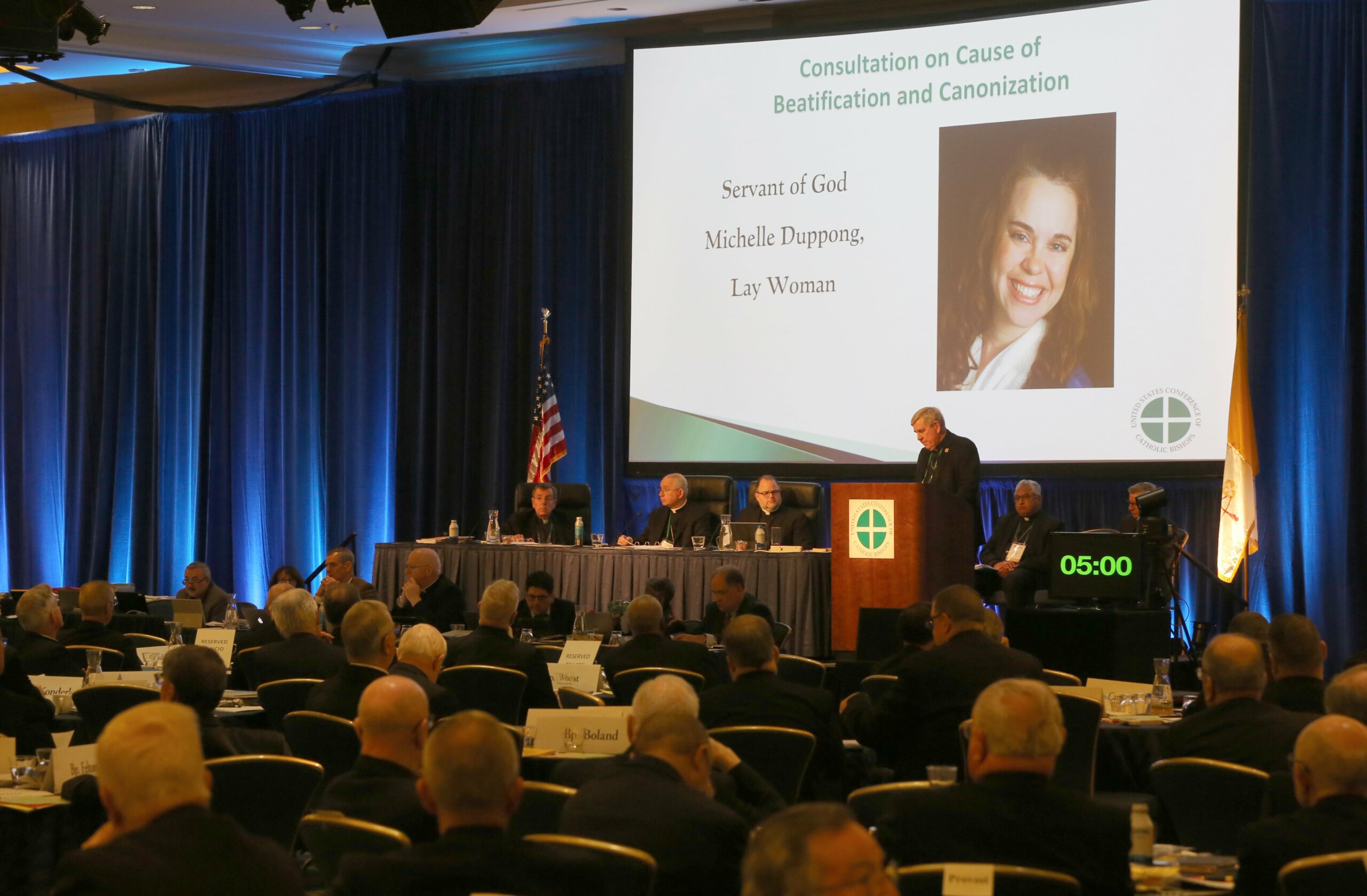 Photo Credit: CNS/Bob Roller - An image of Michelle Duppong is projected on a screen during a Nov. 16 session of the fall general assembly of the U.S. Conference of Catholic Bishops in Baltimore.

Bishops give OK to advance sainthood causes of 3 U.S. Catholics

The U.S. bishops gave their consent for the advancement of the sainthood causes of three U.S. Catholics at the local diocesan level.

The bishops gave their assent in a voice vote on each of the three causes Nov. 16, the only full day of public sessions during their Nov. 14-17 fall general assembly in Baltimore.

“We are not being asked to approve the causes,” said Archbishop Jerome Listecki of Milwaukee, chairman of the bishops’ Committee Canonical Affairs and Church Governance. “We are being invited to offer any observations related to a cause’s advancement related to its … significance.”

Bishops could take into account the sainthood candidates’ “reputation for holiness” and vote on whether they “consider it opportune to advance on the local level.”

The causes are for:

— Mother Margaret Mary Healy Murphy, founder of the Sisters of the Holy Spirit and Mary Immaculate, the first order of women religious in the state of Texas.

— Cora Louise Evans, a California laywoman who was a wife, a mother and possible mystic.

Even before consideration of these three, the bishops’ Committee on Canonical Affairs and Church Governance estimated there are more than 85 sainthood causes at various stages of the beatification or canonization process in at least 55 U.S. dioceses.

The bishops heard a presentation on each woman, and a voice vote followed each presentation.

Archbishop Listecki talked about Duppong on behalf of Bishop David Kagan of Bismarck, North Dakota, who formally opened her cause Nov. 1, giving Duppong the title of “Servant of God.”

Bishop Daniel E. Garcia of Monterey, California, told the bishops about Evans, and Archbishop Gustavo García-Siller of San Antonio spoke to them about Mother Murphy.

Born in County Kerry, Ireland, in 1833, young Margaret Mary Healy and her family found passage to the United States to escape the famine when she was 12. Her mother already having died, her father died shortly after the family arrived, and Healy was taken by relatives from Virginia to Texas to Mexico.

She married newspaper editor John Murphy at age 16. She returned to Texas and ministered to yellow fever victims as far as 35 miles away.

Settling in Corpus Christi, Texas, before the start of the Civil War, Healy Murphy cooked meals for those in need. After the war, a yellow fever outbreak hit the city, claiming the life of her parish pastor. The daughter of another victim was entrusted to Healy Murphy, who had been caring for the woman.

She and her husband also accepted into their home a niece whose parents had died and paid for the education of the girls, both of whom became nuns.

After her husband died, Healy Murphy opened a tuberculosis sanitorium in Corpus Christi and, after a request by some priests, used her own funds to establish a school for Black children.

After moving to San Antonio, she built the first church and school for Black Catholics in the city and founded a religious order in 1893 known then as the Sisters of the Holy Ghost, whose charism is “manifesting the compassion of Jesus to the poor.”

As foundress of her order, she became Mother Murphy. She died in 1907 at age 74. The order continues to serve in the United States and Zambia.

Evans was born in 1904 and was raised in the Church of Jesus Christ of Latter-day Saints. She married her husband at the church’s Salt Lake City temple. But she left the ceremony “disillusioned and disappointed with Mormonism,” according to a brief biography of Evans furnished to the bishops.

In the following 10 years, she had three children and investigated many belief systems, “but believed it would be a waste of time to even inquire about Catholicism,” the biography said.

But in 1934, when she was ill and bedridden, a radio show came on about Mary and Catholic teachings. Too sick to get out of bed to shut off the radio, Evans was forced to listen. After she recovered, she sought out the priest who had spoken on the radio to ask him questions

To learn more, Evans even hosted debates in her home between clergy from her old church and what would be her new church. She was baptized a Catholic in March 1935; her husband and children followed suit a few months later. She invited her former church colleagues to her parish’s open-house sessions. A priest declared that Evans’ evangelization efforts had won hundreds of them over to Catholicism.

Duppong, born in 1984, did not live a long life; she died on Christmas Day in 2015 at age 31. While studying horticulture at North Dakota State University, “she continued to grow in her faith and spiritual life, which especially blossomed through the ministry of FOCUS (the Fellowship of Catholic University Students),” according to a brief biography furnished to the bishops.

After graduating in 2006, Duppong spent six years with FOCUS as a missionary, ministering on college campuses in North Dakota, South Dakota and Nebraska. “In 2012, Michelle discerned that God was calling her to a new evangelization ministry, and she became the director of adult faith formation for the Diocese of Bismarck,” the biography said.

However, she was diagnosed with cancer just after Christmas of 2014. She “battled the disease with perseverance and a patient, cheerful spirit,” the biography said. “Since her passing, her family has received and continues to receive numerous letters attesting to intercessory favors received through her intercession.”