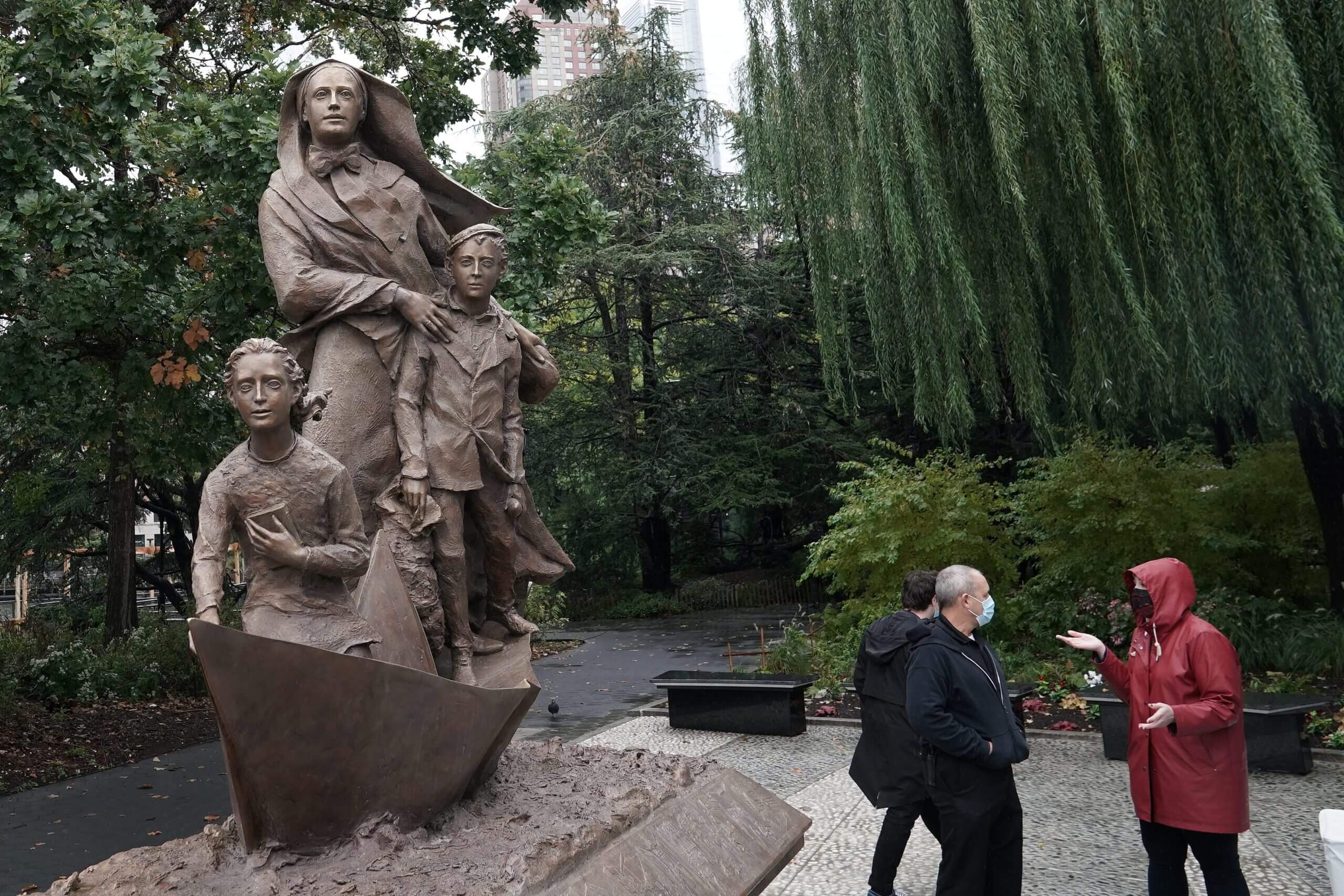 Photo Credit: CNS/Carlo Allegri, Reuters - A statue of St. Frances Xavier Cabrini, patron of immigrants, is seen after its unveiling Oct. 12, in the Manhattan borough of New York City.

A statue of St. Frances Xavier Cabrini, the patron of immigrants, now stands overlooking the New York Harbor and the Statue of Liberty.

Unveiled during a dedication ceremony in Battery Park City on Columbus Day, Oct. 12, the statue honors Mother Cabrini, as she is best known. She is revered for not only her devotion to immigrants but also to children and the destitute.

The sculpture, designed by Jill and Giancarlo Biagi, shows the saint “in motion and taking care of children” and it “does her justice,” Brooklyn Bishop Nicholas DiMarzio said in his remarks at the ceremony. “I know for the artists it was a work of passion.”

“We hope that people who visit this memorial will recognize that history should be repeated, that there was a care for the outcast and marginalized which Mother Cabrini understood, and we need that same care today,” the bishop said. “This is not just history, we want to make history with a new understanding of how we take care of people.”

Others at the dedication ceremony included New York Gov. Andrew Cuomo and fellow members of the Mother Cabrini Memorial Commission.

“This statue of Mother Cabrini recognizes both her contributions as an Italian immigrant woman, as well as those of all Italian American and immigrant women,” John Leo Heyer II, a commission member, said at the ceremony.

“She is a shining symbol of what it means to care for the other person, the sick, the uneducated, the economically challenged and the stranger, always putting the needs of society’s most vulnerable above her own,” he added. “I hope that people will see this heroic statue, ask questions, learn about her outstanding life and work to imitate it as we all build New York’s future together.”

Bishop DiMarzio, who is co-chairman of the Mother Cabrini Memorial Commission, said he was happy so many people supported the effort to fund creation of a statue of the saint and find a site for it after Mother Cabrini was passed over in an initiative to increase the number of statues of women in New York City.

Last year, the city’s first lady, Chirlane McCray, and her She Built NYC commission rejected Mother Cabrini for one of those statues, even though the saint received the most nominations of any of the 320 women nominated. Among those chosen for the first of the new statues were jazz great Billie Holiday, desegregation activist and Latina doctor Helen Rodriguez Trias, and LGBTQ advocate Sylvia Rivera.

Outrage over the snubbing of Mother Cabrini prompted a march in Brooklyn Oct. 6, 2019, that drew more than 1,000 people, including many Italian Americans. It was led by Bishop DiMarzio and Msgr. David Cassato, director of the Brooklyn Diocese’s Italian Apostolate.

This reaction led Cuomo to announce the formation of a state commission to work with the Columbus Citizens Foundation and the Brooklyn Diocese to raise the money for a Cabrini statue.

“We should applaud their courage and their activism,” the governor said. “But my friends, we should even do more. We should support them. Let’s join with them tonight. Let’s stand up and demand respect for our community. Let’s lead the way by taking action and let’s build a memorial to Mother Cabrini.”

During last year’s Columbus Day Parade in New York, a Cabrini statue was displayed on the Brooklyn Diocese’s float. In addition, statue supporters marched behind a diocesan banner in the parade.

Born in Italy, Mother Cabrini was the foundress of the Missionary Sisters of the Sacred Heart. Her dream was to go to China but at the insistence of Pope Leo XIII, who asked her to work among Italian immigrants in the United States, she left Italy for New York in 1889, accompanied by six sisters.

She established orphanages, schools and Columbus Hospital, and held adult classes in Christian doctrine. She received requests to open schools all over the world. She traveled to Europe, Central and South America and throughout the United States.

A Brooklyn diocesan news release about the Cabrini statue dedication said the diocese also has also raised funds to pay for the construction of a Mother Cabrini monument in Brooklyn.

Due to Covid-19 restrictions, attendance at this year’s Columbus Day Mass was significantly reduced, but it was livestreamed from the cathedral. Those allowed to attend had to wear facial coverings and maintain social distance from one another.