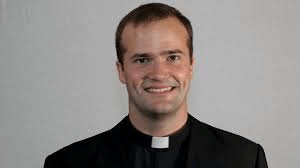 When school begins on Sept. 8, the 340 students at Rice Memorial High School in South Burlington will be greeted by four new faculty members:

Originally from the Southwest of France, Ananou is a native French language speaker as well as near-native Spanish speaker. She earned her master’s degree in English and Spanish with a concentration in international business from the University of Toulouse-Mirail, France. For the past 10 years she has lectured in French and Spanish at several universities on the East Coast of the United States. Since her family’s relocation to Vermont in 2018, she has been an instructor for the Alliance Française Lake Champlain Region, in Burlington. She also served as a French instructor at the Lake Champlain Waldorf School in Shelburne and at CVU Access in Hinesburg.

Born and raised just outside Boulder, Colorado, Gowdy earned a bachelor’s degree in English at the University of Colorado and a master of education at Montana State University. He has 10 years of experience teaching English Language Arts in South Korea, Montana and Connecticut.

Father Matthew Rensch, Religion
Father Rensch, former parochial vicar of the Rutland-Wallingford Catholic Community, is administrator of the Catholic churches in Waterbury, Moretown and Waitsfield. While his older sister, Christina, and younger brother, Tim, both attended Rice, his teaching a senior theology class is his first official role with Rice.

Urbina grew up in Bogotá, Colombia, and after earning a bachelor’s in education at Universidad Francisco José De Caldas in Bogotá, Colombia, he worked as a Spanish and an English instructor for young adults, adults and seniors. He later moved to Vermont to pursue his master’s degree in TESOL.  He has taught at various Vermont schools and facilities, most recently teaching Spanish at middle school and high school level at Vermont Commons School. He has also taught and helped prepare New Americans for their citizenship exams, language skills tests and the linguistic and cultural changes that are part of life in the United States.

Rice’s foundation is built on four pillars: faith, academic excellence, community and service. Rice is a Roman Catholic high school that was founded in 1917 as Cathedral High School and was renamed after moving to the current location in 1959.