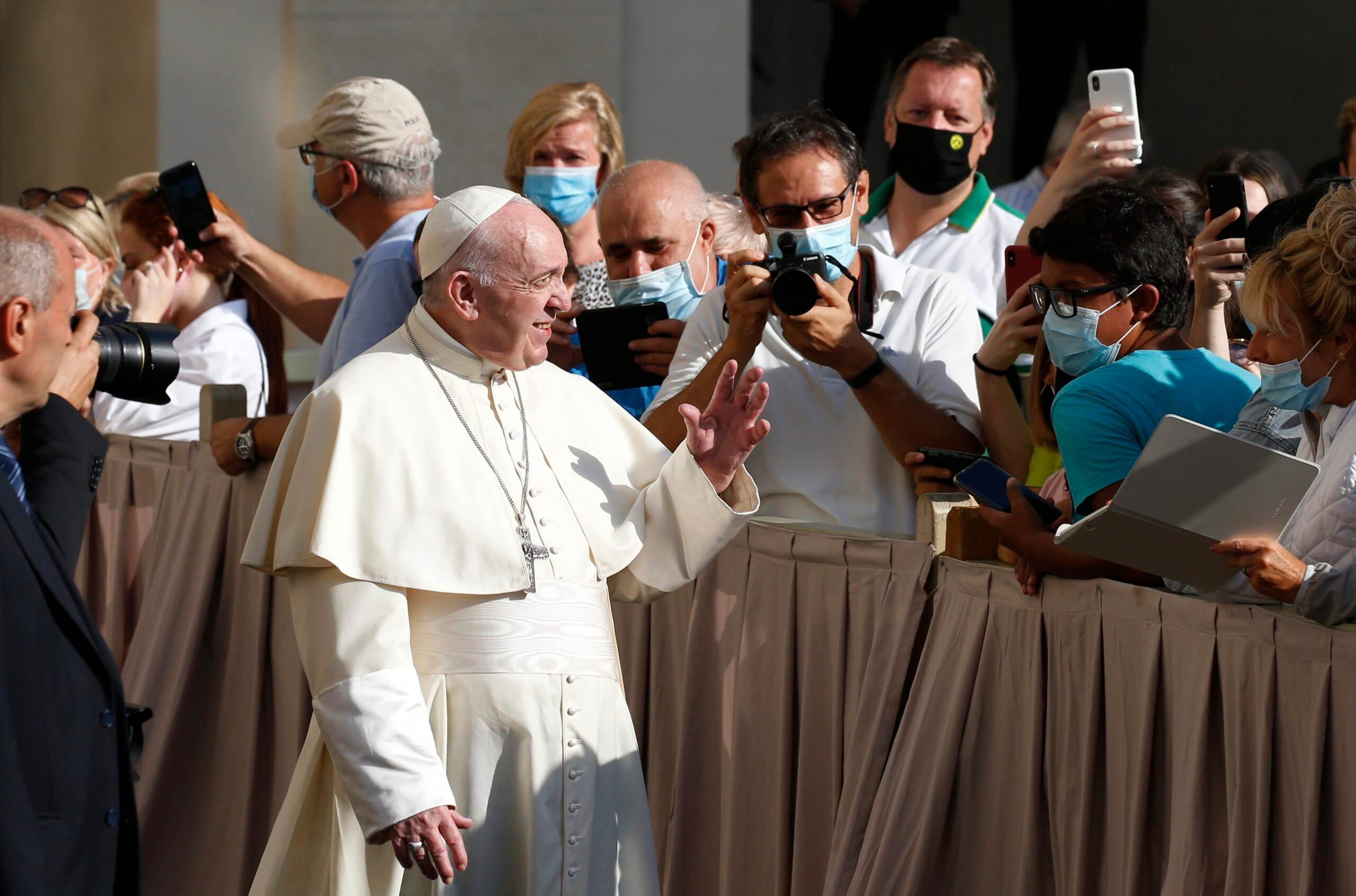 Photo Credit: CNS/Paul Haring - Pope Francis greets the crowd as he arrives for his general audience in the San Damaso courtyard at the Vatican Sept. 9.

The common good — and not political or economic gain — should be at the heart of the race to find a vaccine for Covid-19, Pope Francis said.

During his weekly general audience Sept. 9, the pope said that “we see partisan interests emerging” in the search for a vaccine, and some people “are taking advantage of the situation to instigate divisions: by seeking economic or political advantages, generating or exacerbating conflicts.”

“Others simply are not interesting themselves in the suffering of others; they pass by and go their own way. They are devotees of Pontius Pilate: they wash their hands,” he said.

The general audience was in the San Damaso courtyard of the Apostolic Palace, a small space with seats for about 500 people. While attendees were required to wear masks, they bunched up at the railings to try to get closer to Pope Francis, prompting him to urge them to return to their seats and stay a safe distance from one another.

“Please move back so that you aren’t crowded here. Each one (return) to your seats so we can avoid infections,” he said at the start of the audience.

After the audience, the pope put on a mask before getting in his car to leave the courtyard.

Continuing his series of talks on “healing the world,” highlighting Catholic social teaching, the pope reflected on the importance of love and the common good, especially in a time of crisis.

The Christian response to the pandemic, he said, “is based on love,” which is difficult, especially when it means “loving the enemy,” which is “the highest summit of holiness.”

“Many times, a caress does more good than so many arguments — a caress of forgiveness and not many arguments to defend ourselves. It is inclusive love that heals,” the pope said, departing from his prepared remarks.

Love, he continued, not only makes families and friendships flourish, but also “social, cultural, economic and political relationships,” thus allowing for the growth of a “civilization of love.”

“Without this inspiration, an egotistical, indifferent, throwaway culture (that) casts out those who we don’t love, prevails,” he said.

“If the solutions for the pandemic bear the imprint of selfishness, whether it be by people, businesses or nations, we may perhaps emerge from the coronavirus crisis, but certainly not from the human and social crisis that the virus has brought to light and accentuated,” the pope said.

“Therefore, we must be careful not to build on sand! To build a healthy, inclusive, just and peaceful society we must do so on the rock of the common good,” he said. “Common good is a rock.”