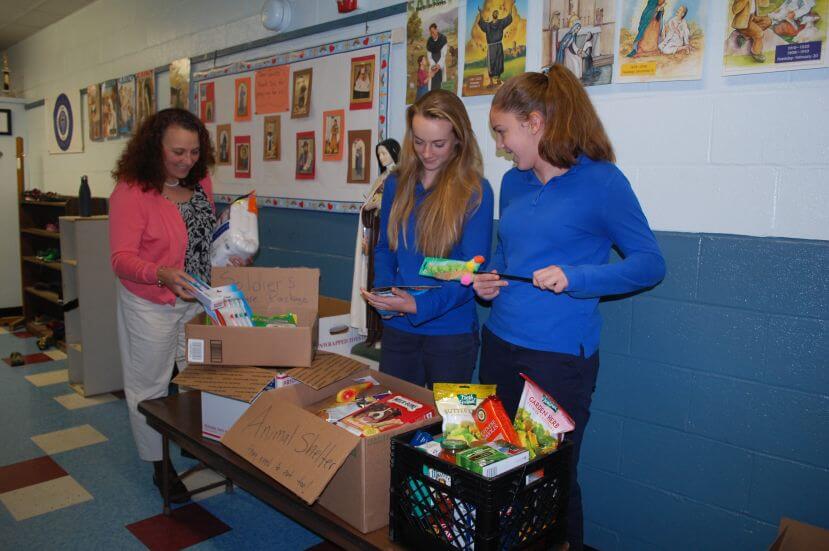 The boxes of donated items to four different charities during Advent are a testament to the generosity of the families at St. Paul School in Barton.

With only about 50 families, the school sends boxes of gifts to active soldiers, pet items to the local animal shelter, toys to the Toys for Tots program and food to the local food pantry.

“This is little Barton, and our families sacrifice to [send their children] here already. They are so thankful and somehow able to still be generous,” said Principal Joanne Beloin.

There are 68 students in pre-kindergarten through eighth grade, and 30 percent of the students qualify for free and reduced lunches.

“A lot has been done for us at St. Paul’s or we wouldn’t still be here,” she said. “It’s the right thing to do to pass on that generosity and help others.”

The school community sends two boxes of toiletries, games, candy, writing material, socks and homemade cards to soldiers during Advent and another for Valentine’s Day.

“Our school as a whole really supports our vets,” Beloin said, and that support reaches to today’s soldiers.

“They support our country, and we want to honor them and support what they are doing for us,” said Jennifer Wilson, the third- and fourth-grade teacher as her students worked on a poppy-themed art project to send to veterans.

“It’s nice to do this. They are rising their lives for us,” Micha Sicard, 9, a third grader said of the boxes sent to soldiers.

Classmate Akira Conley, 8, said she likes collecting for the animal shelter because “God doesn’t want to see the animals starve because they’re His creation.”

Mara Royer, 13, an eighth grader, usually contributes to the Toys for Tots collection because she likes to help ensure a child’s happiness on Christmas morning. “You want to welcome Christ by being full of cheer, and you want everyone to be as happy as possible.”

Riley Perry, 13, also an eighth grader, said her family and school community model generosity for her: “It’s important to be generous because you can share happiness.”

“Giving is just as good as receiving,” Mara added. “It makes you happy deep down inside.”

–Originally published in the Winter 2017 issue of Vermont Catholic magazine.