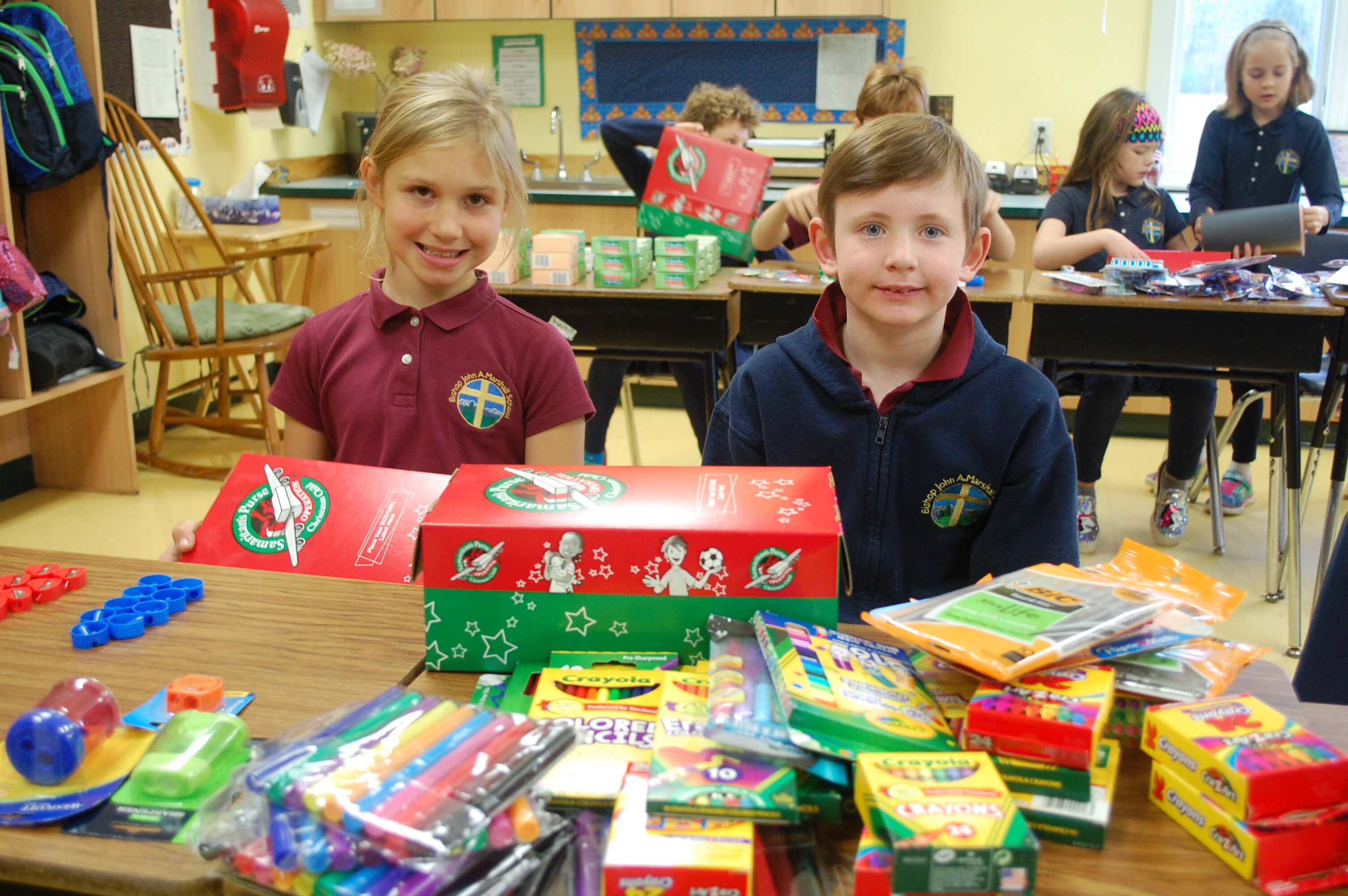 While children in Kate Curran’s third-grade class at The Bishop John A. Marshall School in Morrisville make their Christmas lists, they know there are children in the world who have less — much less — than they have.

Some children’s lives have been torn apart by war and natural disaster; others are stuck in a cycle of poverty. And without help, they might not receive even one Christmas gift this year.

That’s why the Bishop Marshall School children are filling shoeboxes with gifts for Operation Christmas Child.

“I feel [the project] will make a big difference in the world,” said Amalie Pratt, 8. “Christmas is a happy time of year, and it’s good for everyone to be happy. And when children get these [boxes] they will be really happy to get them.”

Operation Christmas Child is a project of Samaritan’s Purse, an international relief organization. Its mission is to provide local partners throughout the world with shoeboxes filled with small toys, hygiene items and school supplies as a means of reaching out to children in their own communities with the Good News of Jesus. Gifts are distributed to children affected by war, poverty, natural disaster, famine and disease and to children living on Native American reservations in the United States.

Included in each box is a toy, paper, pencils or pens, soap and a toothbrush. Other items are added as available. Brushes, combs, washcloths, hair ties, pencil sharpeners, markers and erasers were among the items the Bishop Marshall students were adding to the 35 boxes the class filled for Operation Christmas Child.

The project was part of the November celebration of Catholic Schools Week at Bishop Marshall School. “This is a time for community service and to get [the children] in the mindset of these simple things” they can do to help others, Curran said.

While Vermont children might be asking for drones, cameras, snowboard boots and computer games this Christmas, her students understand that “a pad of paper is a luxury gift to a child in other countries,” she said.

Asked whom he is following by helping children in need, Kelly Apple, 9, was quick to reply that Jesus set the example. “He loves everybody. He loves the poor people. Everyone should love the poor people,” he said.

“I want every child to know there is a God who loves them,” and Franklin Graham, president of Samaritan’s Purse, based in Boone, North Carolina.

In addition to the shoebox gifts, recipients also get a copy of “The Greatest Gift,” a storybook that shares the message of salvation and 11 scripture stories and invites children to follow Christ. Children take this home to share with family and friends. It is used in more than 80 languages.

Since 1993, Operation Christmas Child has delivered gift-filled shoeboxes to more than 146 million children in more than 100 countries.

For more information, go to samaritanspurse.org/what-we-do/operation-christmas-child.