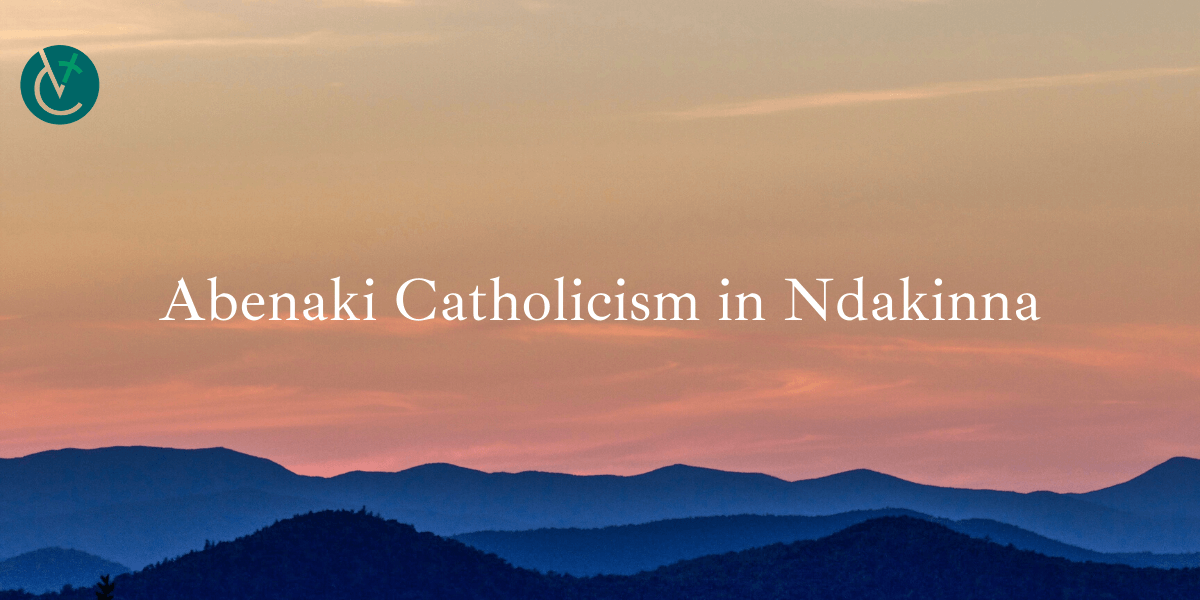 Walking in a Good Way: Abenaki Catholicism in Ndakinna

If you walk along the waterfront in Burlington, you will come upon a large wooden statue in Battery Park that honors Grey Lock, a great leader who led Abenaki warriors against an encroaching Puritan population from the south. This is commonly known as the Grey Lock War (1723-1727).  What you may not know is that the statue honors Catholic history as well. Vermont, called Ndakinna, meaning “Our Land” by the Abenaki inhabitants, was also Catholic country.

Mississquoi, where Grey Lock and his family were baptized in 1740, had a Catholic church run by Jesuits who had asked permission to settle among the Abenaki. The village had about 40 lodges and was strategically placed so as to teach the Abenaki travelling up and down Lake Champlain. Tradition has it that Abenaki Catholics transported stone for the church in their canoes.

The church in Mississquoi was not the first church in Ndakinna. Priests first ministered in Vermont as early as 1615. Churches were built in Isle LaMotte, Ferrisburg and Newbury, another important Abenaki center named Cowass. The Jesuits referred to this mission on the Connecticut River as “mission de loups” or mission of the wolves. This mission was setup to teach the Koasek Abenaki traveling up and down the river.

Many Abenaki became Catholic, and examples of their intense religious faith and Catholic devotion fill the Jesuit Relations, Puritan accounts and Abenaki oral tradition. Abenaki sang Catholic hymns and said prayers in the Abenaki language. When there was not a resident priest in Vermont, Abenaki travelled up to Odanak, a large Abenaki settlement on the St. Lawrence River, for the sacraments. The Abenaki even brought their own chaplain on large military campaigns.
To outsiders, Abenaki Catholicism might seem strange or even contradictory. Not to Chief Don Stevens of the Nulhegan Abenaki Tribe. “Abenaki were easily converted to the Catholic religion because their spiritual practices are similar in nature,” Stevens explained. “For instance, we Abenaki believe in one God with many spirits. The Catholic religion also recognizes one God with many spirits: saints and angels. Both religions allow for those spirits to watch over them and do certain tasks for them.”

A key example is a name common among Abenakis: St. Francis. “St. Francis watches over the animals and the forests. The Abenaki ‘spirit of the woods’ performs the same function. We have songs dedicated to this spirit. The French referred to many of the Abenaki as the ‘St. Francis’ Indians, and that name is still prevalent in Missisquoi and Odanak today. So you see, the two beliefs are the same and parallel in practice.”

What Stevens calls “parallel in practice” is not hard to see. Both traditions emphasize the importance of sacrifice and discipline. The incense, bells and ritual of Catholicism were similar to Native ways of prayer and ceremony. Yet Abenaki spirituality was different in that it was more all-encompassing than their Puritan neighbors to the south, something that outsiders noticed. Father Jacques Bigot, a Jesuit priest who lived with the Abenaki, wrote in 1699 that Puritan captives are at first “greatly prejudiced against us [Catholics] but they gradually allow themselves to be persuaded by the devotion of our Abenakis [the local Indians] and their zeal for prayer — which they do not find, they say, in their own colony” (Demos, The Unredeemed Captive, 152).

The devotion and prayer described by Bigot are not a product of Catholic missions but part of the way of life you hear described across Native American country to this day: living or walking “in a good way.” This recognizes that all is sacred and a gift. Traditional and Catholic practices of ceremony and prayer connect you in a spiritual way to all that surrounds you.

In Ndakinna, the Catholic way permeated the Abenaki way even for non-Catholics. The small island off of Shelburne Point that we call Rock Dunder, is a sacred site for the Abenaki, believed to be Odzihozo, the Earth-Shaper. In the 1800s, Chief Polani-Taxos-Kohla-Kost heard the Catholic story that the Great Spirit said he was to build His church upon a rock and remembered Odihozo. Chief Polani contemplated how both the Abenaki and the Catholic ways understood the Great Spirit to respect “the strength and endurance of the rock” and because of that took that name Peter (Trudy Ann Parker, Aunt Sarah: Woman of the Dawnland, 3). For Chief Peter Polani-Taxos-Kohla-Kost, walking in a good way in Ndakinna was to honor all the ways the Great Spirit shines through creation.

The next time you go to Battery Park, send up a prayer of thanksgiving for our spiritual ancestors. Maybe you could also look at Odzihozo and discern how you could be a better steward of this sacred land. And best of all, go to an Abenaki event. Pray for their future and learn from them. Meditate on the first two centuries of Catholicism in Vermont and let your spirituality permeate all you see and all you do, that we may all walk in a good way here in Ndakinna.