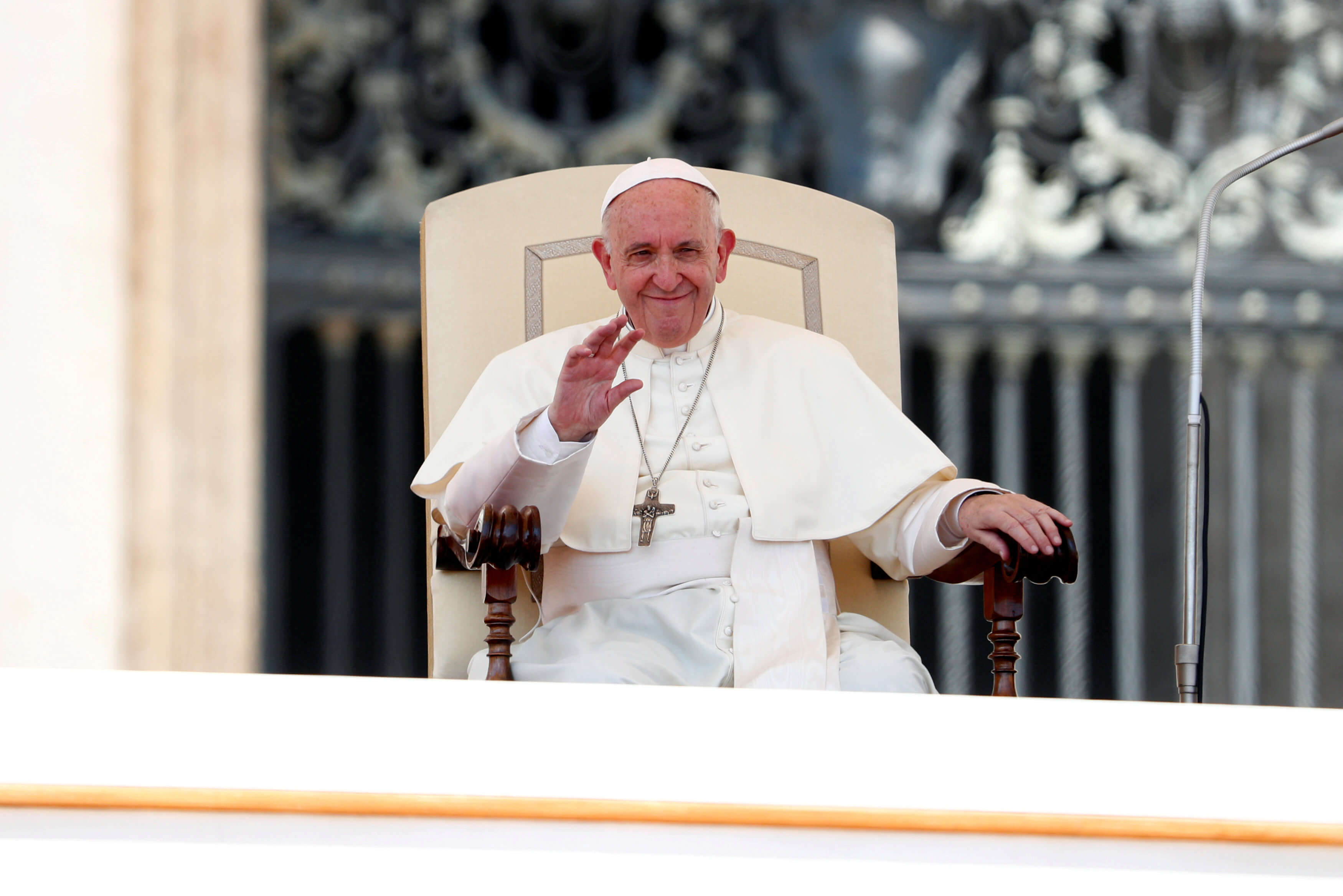 Photo Credit: CNS photo/Max Rossi, Reuters - Pope Francis greets pilgrims as he arrives in St. Peter's Square at the Vatican. Everything in the document "Amoris Laetitia" on marriage and family life is based on Catholic Church teaching "always in continuity — without ruptures — yet always maturing," Pope Francis said.

Pope says he sees continuity, not rupture in ‘Amoris Laetitia’

Everything in the document “Amoris Laetitia” on marriage and family life is based on Catholic Church teaching “always in continuity — without ruptures — yet always maturing,” Pope Francis said.

In addition, when referring to specific ethical situations, “the exhortation follows the classical doctrine of St. Thomas Aquinas,” the pope wrote in a letter to Stephen Walford, author of the new book, “Pope Francis, the Family and Divorce.”

The letter, sent to Walford after he, his wife and five children met with Pope Francis in July 2017, is included as the preface to the book, which is being published by Paulist Press in the United States.

“The exhortation ‘Amoris Laetitia’ is a unified whole, which means that, in order to understand its message, it must be read in its entirety and from the beginning,” the pope wrote to Walford. “This is because there is a development both of theological reflection and of the way in which problems are approached.”

Pope Francis said the exhortation “cannot be considered a ‘vademecum’ (handbook) on different issues. If the exhortation is not read in its entirety and in the order it is written, it will either not be understood or it will be distorted.”

Walford, who lives in Southampton, England, began writing his book after publishing an open letter in 2017 to the four cardinals who, in late 2016, publicly released a list of critical questions, known as “dubia,” about the pope’s document. In his open letter, Walford defended Pope Francis’ teaching and warned the four cardinals, two of whom are now deceased, that their position was being used by people attacking the pope.

The new book looks specifically at Pope Francis’ provisions that would allow some divorced and civilly remarried Catholics to receive Communion in certain circumstances and after prayer and discernment with their priests.

In his open letter, Walford had written, “The pope’s interest and pastoral concern is for those souls who love the Lord very much, yet find themselves in an extremely difficult situation; and because of this, I would say this is a very courageous pope, sent by the Holy Spirit for these times, and who has confronted the reality of a wounded church, and a wounded world that must not be abandoned.”

Although not a trained theologian, Walford attempts in his book to explain the theological and moral concepts behind “Amoris Laetitia,” including by looking at the meaning of marriage and family life, the development of doctrine in the Catholic Church, moral culpability and Pope Francis’ teaching on mercy.

“We live in a time of great tribulation and the world has many wounded souls in need of compassion and mercy,” Walford wrote. “The church as mother has the ability to defend the doctrines on the indissolubility of marriage, the holy Eucharist, confession and mortal sin while, at the same time, finding merciful ways to approach those brothers and sisters who have found themselves in a second, civil union.”

The author wrote that he hoped the book would “contribute in some small way to bring hope to those suffering souls in complex relationships, and to those who have been affected by the ‘manufactured confusion’ of papal dissenters.”

Share This Post
Pope Francis, Amoris Laetitia, Marriage and Family, Catechesis and Evangelization, Catholic Professionals
See More
Last Article
Work of the Holy Spirit
Next Article
The rosary: A prayer for anyone, anywhere, anytime
Back to Vermont Catholic Magazine