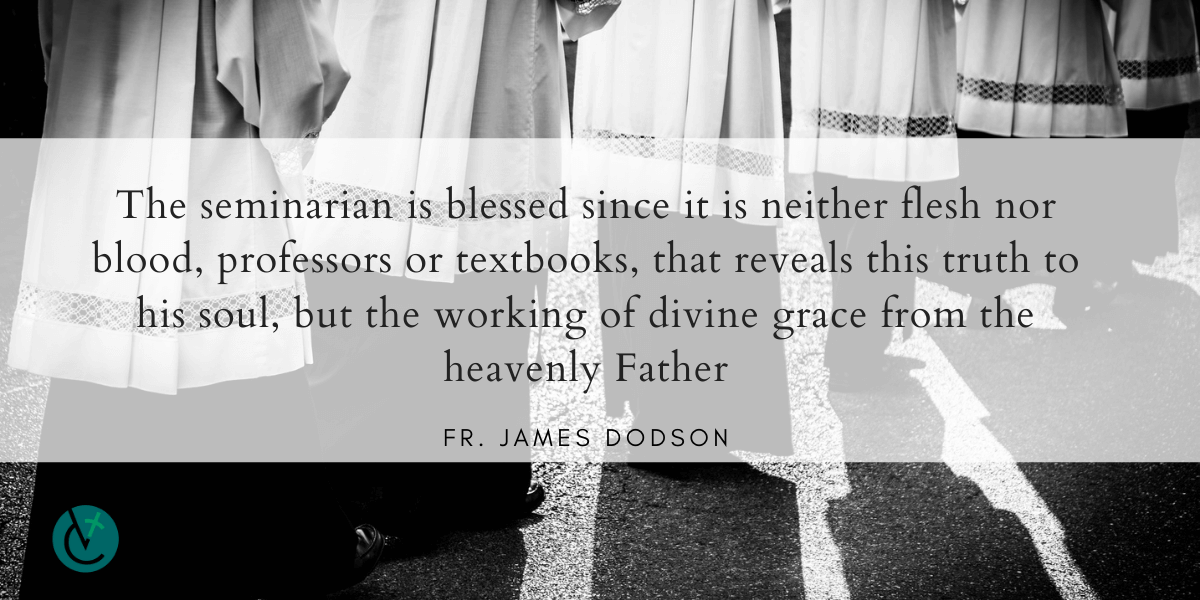 Please pray for them – and an increase in vocations to the priesthood – as they continue their formation and education.

The education of a seminarian simultaneously engages four pillars of formation – human, spiritual, intellectual and pastoral – that are foundational in helping prepare and assess a man during his time of discernment in preparation and anticipation for ordination. These pillars are not mutually exclusive, or realities addressed in isolation from one another, but are intimately interrelated and therefore require constant attention, work and evaluation so that the life of the seminarian embodies evermore the truth of God’s Word.

It has been said that the only true disciples the Lord has are “docibiles Dei” – “teachable of God” – and isn’t this the case when we consider The Twelve? By being with Him, remaining in Him and returning to Him when their faith wavers, time and again Christ educates them about God and leads them in His way.

The Gospels illustrate that being with and learning from Jesus Christ is always blessed and grace-filled for those desiring to follow Him more zealously, and the life of one studying in the seminary today is, of course, meant to resemble and capture that privileged time with the Lord.  So that their faith may mature and deepen, the Lord draws more and more out from His disciples each step along the way so that “every branch … that bears no fruit, [the heavenly Father] takes away, and every branch that does bear fruit He prunes, that it may bear more fruit.” As it is in the Scriptures, so it is to be in the seminarian’s life, and in the lives of all God’s children.

Even though a seminarian studies a broad range of topics during his academic years – philosophy, logic, Latin, Greek, sacred scripture, sacraments, canon law, the Church, the end times etc. – the education of a seminarian must go infinitely beyond what he garners in the classroom.

His education finds its truest fruitfulness and fulfillment when it surpasses “knowing about God” to knowing God, so much so that he echoes St. Peter’s confession of faith in saying about Jesus: “You are the Christ, the Son of the living God.” In this the seminarian is blessed since it is neither flesh nor blood, professors or textbooks, that reveals this truth to his soul, but the working of divine grace from the heavenly Father in and through what so often appears to be education’s normal routine.

The seminarian’s ever-deepening relationship with the Lord does not render unnecessary the foundational educational elements of formation, but rather highlights and fulfills their importance in helping establish that relationship. For the Lord reminds us: “Do not think that I have come to abolish the law or the prophets; I have come not to abolish but to fulfill. For truly I tell you, until heaven and Earth pass away, not one letter, not one stroke of a letter, will pass from the law until all is accomplished.”

Thus a formal seminary education helps to anchor the man in the truths of the faith and means to establish him as a faithful “son of the Church,” so that in and through his relationship with Christ and His Church, he may draw others to God faithfully and passionately, as he himself is continuously drawn by the Savior.

The formality of a seminarian’s education includes maturing as a human being, countless hours of study and prayer and a litany of pastoral experiences. The reality of his education, however, is a divine and transcendent one, for it is a labor of the incarnate love of God in transforming the seminarian’s mind and heart, the success of which is found not in a letter grade, diploma, graduation or even at ordination, but in the praise and glory of God and the salvation of His very dear children.

—Father James Dodson is vocation director for the Diocese of Burlington.