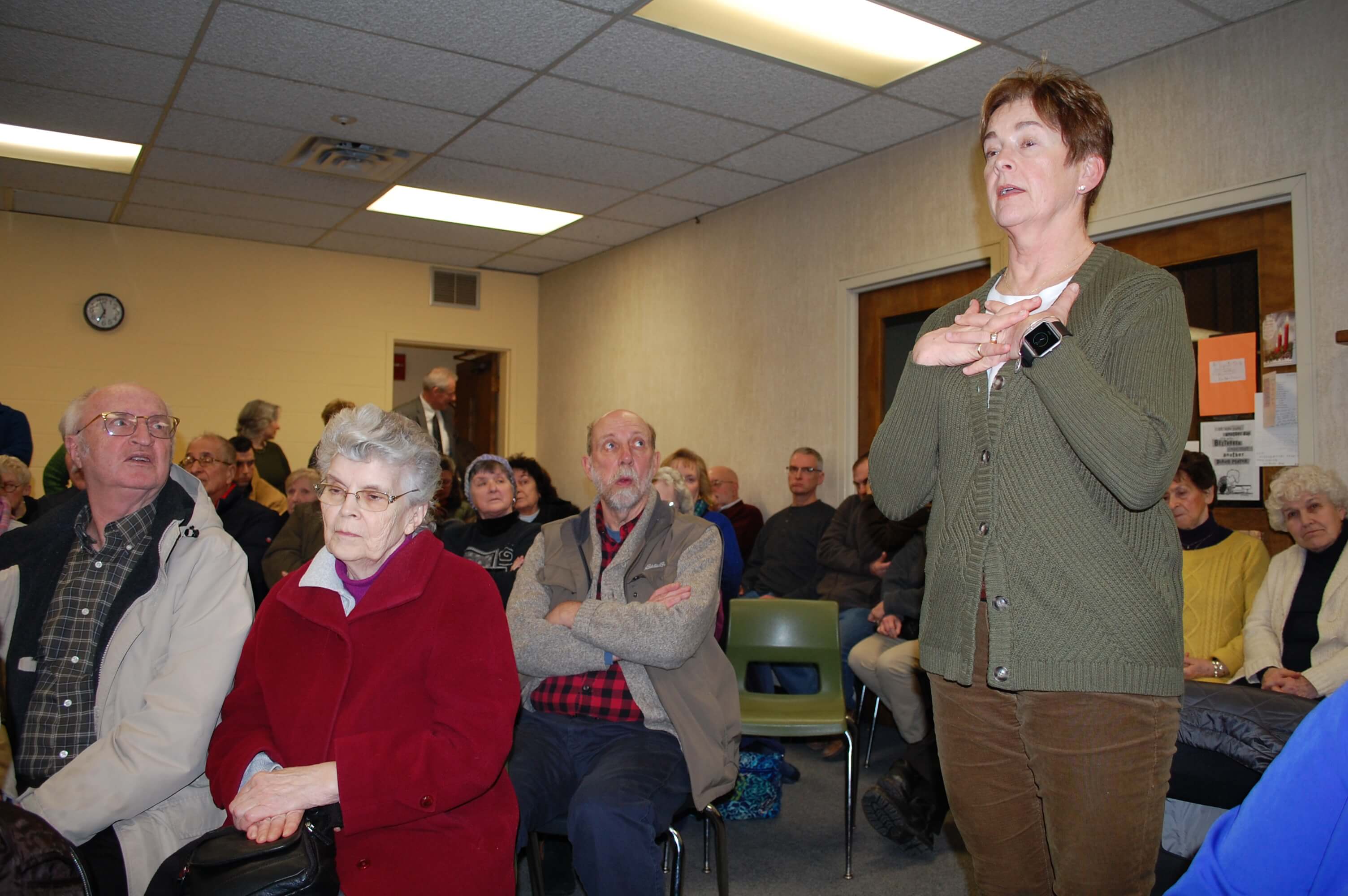 Those were words often said by Burlington Bishop Christopher Coyne as Catholics from the Bennington area told him at a Catholic Town Meeting of their concerns and hurts, offered observations and comments and asked questions.

And that is just what he was there to do.

The six Catholic Town Meetings — taking place this winter throughout Vermont — are a response to something the bishop learned during the Diocesan Synod that concluded earlier this month: Catholics want two-way communication with their bishop, not just the letters, homilies, emails and social media he sends. They want him to listen to them.

And that is what he did Jan. 28 at Sacred Heart St. Francis de Sales Parish Center in Bennington as more than 100 people filled a double classroom to standing-room-only.

Holy Cross Father Robert Wiseman, pastor, opened the meeting with prayer, and then for an hour and a half, Bishop Coyne stood in the front of the room respectfully listening to what more than a dozen people had to say.

And he accepted responsibility when he said he could have done better.

The last response was in regard to H.57, current proposed legislation making it explicit in Vermont law that abortion is legal throughout all nine months of pregnancy for any reason, and no parental notification is required for a minor daughter to have an abortion.

Tom Dee of Sacred Heart St. Francis de Sales Parish said a “fearful stage is being set,” and said the “Church is too quiet.”

The bishop noted that the Diocese currently has no respect life director, but he plans to write a letter to parishioners about the issue. When asked why there had been no communication from the Diocese about the matter, he said, “I have been lax.”

The bishop did celebrate a Respect Life Mass in Montpelier two days before the Bennington Catholic Town Meeting and participated in the annual Rally for Life.

During the Catholic Town Meeting, Bishop Coyne emphasized work the Diocese is doing to ensure the safety of children and to be transparent in handling the clergy abuse situation. “There is probably not a safer organization for children in the State of Vermont than the Catholic Church,” he said.

Other topics he addressed included the change in the age of confirmation in the Diocese, clericalism, married clergy and protection for seminarians and young priests from abusers.

Regarding married clergy, Bishop Coyne said there are married priests in the Latin Rite who have converted from the Anglican/Episcopal Church. But if the Church is to have married priests in general, he said it must not be allowed as a means to “fix a problem” but “because we want to do the right thing.”

Asked about communication on the parish level, the bishop lamented that not every parish disseminates information from the chancery, such as the bulletin insert The Inland See. But, he emphasized, “we are doing everything we can to develop vibrant parishes and good communication.”

Other topics raised included traditional Church teaching, promotion of the Divine Mercy Sunday devotions, ministry to divorced and LGBTQ Catholics, corruption in the Church and the need for a Catholic Medical Association.

To a question about the availability of the extraordinary form of the Mass (the Latin Mass), Bishop Coyne pointed out that there is a St. Philip Neri Latin Mass Chaplaincy based at St. Anthony Church in Burlington and said he is open to making that form of the Mass available in other areas if there is a community that can sustain a chaplaincy and if a priest is able and ready to celebrate those Masses.

In concluding the Catholic Town Meeting, Bishop Coyne thanked those present for their “faithful Catholic witness.”

Mary Jepson, a parishioner of Sacred Heart St. Francis de Sales Church, said after the meeting she was impressed with the way the bishop handled the questions and comments: “I felt he was honest, sincere and genuine.”

Bill Fisk of St. John the Baptist Church in North Bennington called the meeting productive. “He (Bishop Coyne) didn’t debate. I really appreciate that. He’s an engaging individual and not apparently judgmental,” he said. “He’s the kind of leader we need. He’s got the right attitude.”