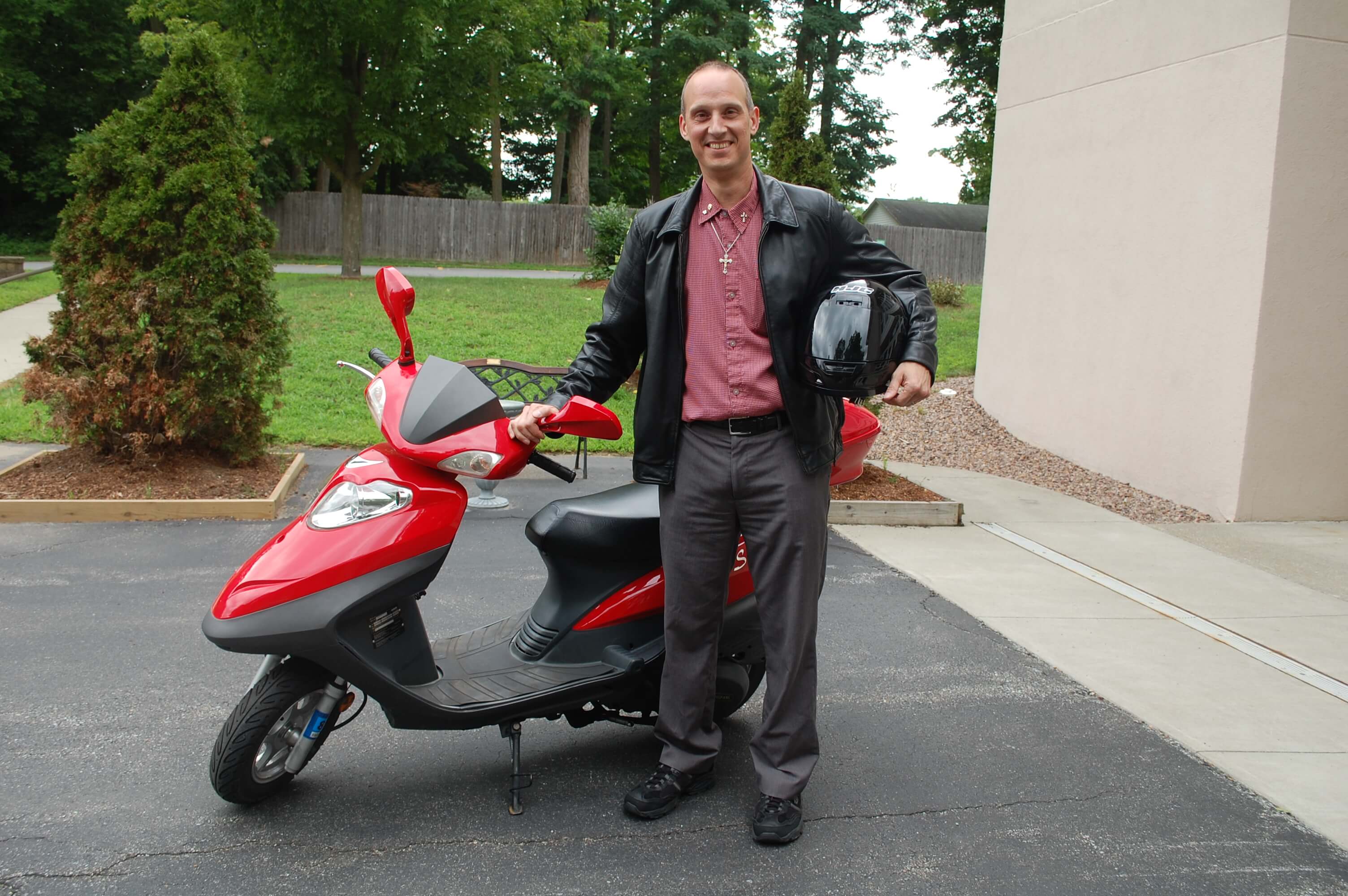 Photo Credit: Vermont Catholic/Cori Fugere Urban - Deacon Paul Garrow pauses next to his red Sunny scooter outside St. Ann Church in Milton. “None of my ministries are done for me,” he says. “I give of the gifts I have for the good of God’s people and for His great glory. I believe that is how we are all called to embrace our vocations and live our lives.”

“Perhaps the greatest gift we can give is prayer,” said Deacon Paul Garrow of St. Ann Church in Milton.

That’s why last year he began “Pray it Forward,” a commitment to offer prayers for different people on different days.

To accomplish this, he decided to model a prayer regimen after the “Pay it Forward” movie about the eponymous goodwill movement.

Deacon Garrow identifies someone to pray for that has not asked for prayer and sends that person a notification — usually by email from his laptop at home first thing in the morning — saying, “You are the focus of my prayer intentions today. Have a blessed day. Deacon Paul Garrow.”

He began Pray it Forward with people he knew but later added people he does not know whose names he got from contact lists from such places as work (he is IT manager for Husky IMS in Milton), Rice Memorial High School in South Burlington, the Diocese of Burlington and the Town of Milton.

There were a few people he chose to pray for on specific days such as weddings or when they were facing troubling times.

Deacon Garrow — a member of the Diocesan Diaconate Board — prays for each person throughout the appointed day.

Admittedly “super organized,” he Prays it Forward on days he is at work when he has his computer set to notify him on each of eight hours, and then he adds the intentions of the person he is praying for to his general petitions that include the needs of biological relatives, those with cancer or grave illnesses, morality and social justice aligned to Catholic teaching and vocations.

He has prayed for about 200 people through Pray it Forward.

Responses from those he prays for vary from no response to a simple “thank you” to requests for additional prayers. No one has ever responded negatively.

Though he does not do this to get a response, he said it is nice to get them. However, he tries to practice “agape love,” which he explained is “doing things for the benefit of others, expecting nothing in return.”

Deacon Garrow chooses not to pray for people anonymously because he said by telling them “you compound the influence of the prayer” because “now if they choose to they can actively receive whatever the Holy Spirit is sending them.”

He likened the prayers to sending “spiritual cash” that recipients can receive and “apply to any part of their life.”

As a deacon at St. Ann’s, Deacon Garrow — who is married and the father of three — leads the Rite of Christian Initiation of Adults program, leads the youth group, provides final formation for confirmation students, heads the liturgy committee, is initiating a vocations ministry and creating a welcome committee.

“None of my ministries are done for me,” he said. “I give of the gifts I have for the good of God’s people and for His great glory. I believe that is how we are all called to embrace our vocations and live our lives.”

He does not know if his Pray it Forward ministry has inspired others to do the same.  “I entrust that to the Holy Spirit,” he said. “It brings me great joy knowing that I am offering the best gift that I can to bring someone closer in their relationship with God.”

—Originally published in the Fall 2018 issue of  Vermont Catholic magazine.