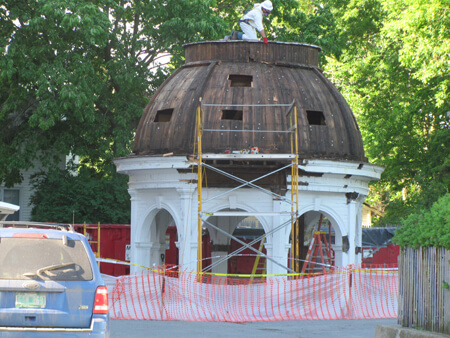 Parishioners of St. Joseph Cathedral and people in the surrounding Burlington community are looking forward to the September resurrection of the cathedral steeple, once a towering structure that could be seen from throughout the Queen City. It has been missing from the skyline for eight years because a storm undermined its stability, requiring its removal for safety reasons.

In November 2010, a violent windstorm caused damage to the 800-pound cross and rooster that comprised the topmost portion of the steeple, causing it to list to one side.

After initial stabilization, the rooster, cross and upper part of the spire were removed in April 2011. It was not until this June that the upper and lower belfries could be removed because of the financial burden involved. Prior examination of the wooden belfry and associated parts revealed extensive wood rot.

Through the agency of its general contractor, J.A. Morrissey, Inc., the parish engaged in discussion with engineers and architects and eventually hired Southgate Steeplejacks to begin the necessary repairs and to build a new steeple.

The new steeple will be a replica of the original one.

According to Ed Barewicz, who is overseeing the project with fellow member of the Finance and Parish councils, David Mount, plans for the steeple restoration were done in consultation with the parish community. “People didn’t want any changes to the original structure,” he said, so the cross and rooster, which were significant elements of the original, will be returned to their place on the newly constructed steeple.

“Restoring the steeple is our way of carrying on what our predecessors did, laboring to build the church,” said Barewicz, noting that there were no cranes when the first steeple was built. “They likely used block and tackle,” a system of pulleys and ropes that allowed for the lifting of heavy loads.

These ancestors, French-speaking, working-class immigrants for whom family, faith and community were essential, “undertook such difficult work because they wanted to leave a sign: ‘We are here,’” Barewicz pointed out.

A news item in an August 1885 issue of The Burlington Free Press recalls the earliest days of the steeple: “The framework of the tower on the new St. Joseph Church was completed yesterday and the cross and gilded rooster were erected in their places. The tower will make a fine appearance.”

The new steeple, currently under construction at the Southgate headquarters in Barre, will be transported to the cathedral for installation expected sometime in September Father Harlow said.

“Not only have the parishioners of St. Joseph been interested in the progress of this project, but many neighbors have commented on how much they have missed seeing the steeple in place. … The neighbors watched with fascination the June 2018 removal of the two belfries with a huge crane and have been very patient with the process,” he said. “Allen Street had to be closed for several hours for the transportation of the crane and its use during the day which forced neighbors to park elsewhere, but everybody was very understanding.”

So, what about the rooster?

Tradition reveals a number of symbolic meanings for a rooster on the steeple of a church. Some say it points to the dawning of a new day and to the joy of the resurrection. Some historians say that, in the ninth century, Pope Nicholas I decreed that the figure of a rooster should be placed on every church, as a reminder of Peter’s threefold denial of Christ “before the cock crows,” and so calls believers to be always faithful to the Lord. Some churches still have the rooster on the steeple to this day.

Among them is St. Joseph Cathedral, founded in 1850 as St. Joseph Parish and becoming the first National French Canadian Parish in New England. The current St. Joseph Church, inaugurated on Easter Sunday 1887, would become the largest church building in the Diocese of Burlington.

Designated a co-cathedral in 1999 by Bishop Kenneth Angell, it was designated the cathedral of the Diocese of Burlington by Bishop Christopher Coyne in March.

Parts of the Cathedral of St. Joseph history, including the 1885 news piece of the Burlington Free Press were taken from http://johnfishersr.net.

— Originally published in the Fall 2018 issue of Vermont Catholic magazine.

Spire (or dome): The spire is the highest steeple section and meant to in”spire” distant viewers. Spires may be square or octagonal, as determined by their lantern or belfry.

Lantern: Below the spire may be a lantern. Less than half of New England steeples have lanterns. They tend to be the most ornate section of any steeple.

Belfry: This section sits above the tower and houses the bell. The belfry may be open or enclosed by louvers, allowing the pealing of the bell to be heard. The structure that forms the belfry floor and tower roof is called the bell deck.

Tower: The lowest steeple section that rises out of the building is the tower. If a steeple has clocks, they are usually in this section.