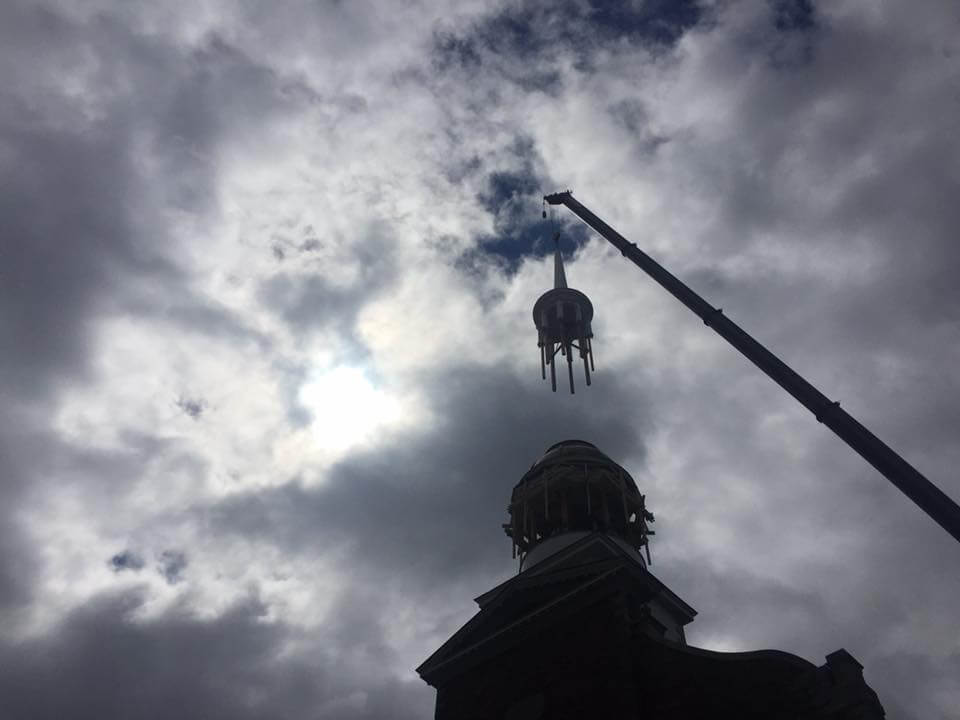 The St. Joseph Cathedral steeple has been repaired and replaced atop the Allen Street church in Burlington.

“It took longer than expected due to the scope of the project, which is why we are finishing it in May and not September as originally expected,” said Father Lance W. Harlow, cathedral rector.

The cathedral steeple, once a towering structure that could be seen from throughout the Queen City, has been missing from the skyline for more than eight years.

In November 2010, a violent windstorm caused damage to the 800-pound cross and rooster that comprised the topmost portion of the steeple, causing it to list to one side.

After initial stabilization, the rooster, cross and upper part of the spire were removed in April 2011. It was not until June 2018 that the upper and lower belfries could be removed because of the financial burden involved. Prior examination of the wooden belfry and associated parts revealed extensive wood rot.

The new steeple is a replica of the original one, which was erected in 1885..

“Restoring the steeple is our way of carrying on what our predecessors did, laboring to build the church,” said Ed Barewicz, who has been overseeing the project with fellow member of the Finance and Parish councils, David Mount.

The replacement took place on Tuesday morning, May 21, between 7 a.m and 12 p.m.

“As an architectural feature of the church building, it has been part of the Burlington skyline since 1887, had disappeared for several years, but now once again, the steeple surmounted by the cross of Christ will be lifted high above the city as a beacon of faith to all who see it,” said Father Harlow.

For more information about the steeple repair project and steeple design, see the September 2018 article “Steeple repair” from Vermont Catholic.