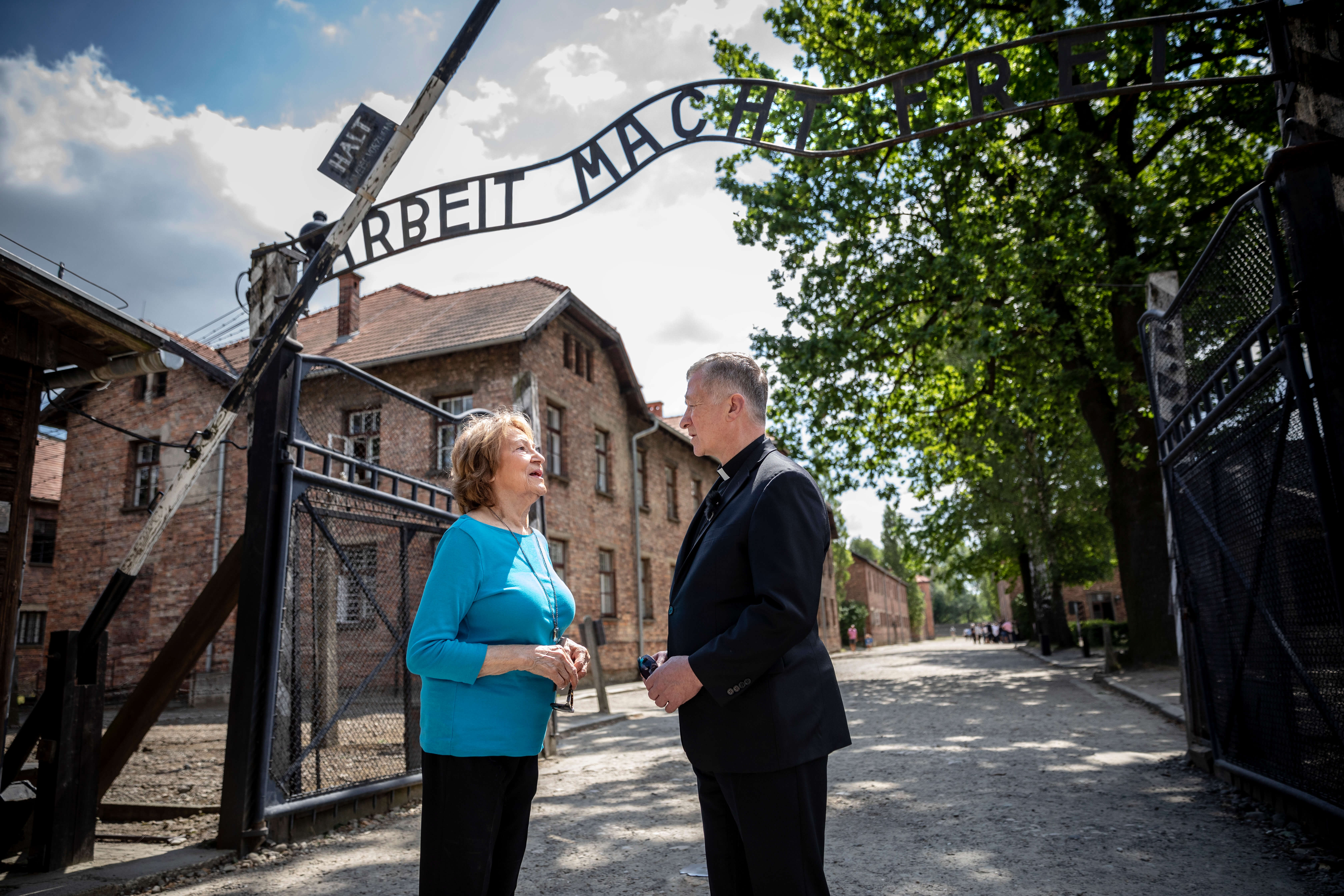 Photo Credit: CNS/Tom Maday - Fritzie Fritzshall, president of the Illinois Holocaust Museum and Education Center in Skokie, Ill., and survivor of the Auschwitz Nazi concentration camp, and Chicago Cardinal Blase Cupich, talk underneath the entrance gate at the camp in Oswiecim, Poland, earlier this month.

Adolf Hitler’s rise to power and the policies that led to the Holocaust all began with words, including words that targeted “the other,” Cardinal Blase Cupich of Chicago wrote in a July 24 commentary in the Chicago Catholic, the archdiocesan newspaper.

The “calculated stages” the Nazis carried out that ultimately resulted in the Holocaust began with bigoted language against minorities that the majority soon came to accept as credible, said the cardinal, adding that these lessons from history must be recalled today when many in society target immigrants, refugees and various groups of people as “the other.”

Cardinal Cupich noted the “dramatic increase in anti-Semitism and hate speech” today. He also pointed to the “barbaric assault on a synagogue in Pittsburgh (last October), the desecration of Jewish cemeteries in Europe marred with swastikas … the hate speech that speeds across the internet linking like-minded bigots and in the delusional minds of those who continue to deny the reality of the Holocaust.”

The cardinal made the comments as he reflected on his July 4 visit to Auschwitz with Fritzie Fritzshall, president of the Illinois Holocaust Museum and Education Center in Skokie, Illinois — and a survivor of the Nazi death camp in Poland.

Cardinal Cupich said that shortly after they arrived, Fritzshall asked him: “How could this happen? How could people turn on their neighbors?”

“My first reaction was to say there really is no response to how members of the human race could be so callous and brutal, to the point of targeting people for extermination because of their heritage and religion,” the cardinal wrote.

“Yet, that is not a satisfactory response. Such brutality does not come naturally to human beings; it is taught progressively through the creation of a false narrative about others, which, step by step, is accepted as the new normal.”

He cited a best-selling book by Erik Larson titled “In the Garden of Beasts: Love, Terror and an American Family in Hitler’s Berlin,” in which he examines how words led to the stages that ultimately led to the extermination of 6 million Jews “and countless others.”

Larson ultimately aims “to show why it took the world so long to recognize the grave threat Hitler posed to the world,” Cardinal Cupich continued.

The author tells the story of William E. Dodd, an American historian from the University of Chicago, who was chosen by President Franklin D. Roosevelt to be America’s first ambassador to Nazi Germany, the cardinal said. “He and his family were at first enthralled by the ‘New Germany’ that emerged from the ashes of World War I, as they witnessed a war-ravaged country full of energy, enthusiasm and excitement for a new future.”

But as Hitler rose to power, there was “mounting persecution” of Jews and Dodd’s “excitement turned to fear,” Cardinal Cupich said. He telegraphed the U.S. State Department with “firsthand accounts of attacks on Jews, the censorship of the press and the enactment of new laws that restricted the rights of the Jewish people and minorities,” but the reports were treated with indifference and thought to be “too sensational to be reliable.”

“What became clear to Dodd was that Hitler’s rise to power and the policies that led to the Holocaust developed through calculated stages,” Cardinal Cupich said, starting with “bigoted language targeting a minority,” which “was dismissed by society” because it came from a few people initially, then “in time others reinforced the message, giving it credibility.”

“The next stage came as those targeted were defined as ‘other,'” the cardinal said. “The ‘other’ soon became the scapegoat, responsible for the grievances people were told they should have, especially as they reflected on their experience of loss from the First World War. This allowed a narrative to be created for the nation, whose rise to greatness could only be achieved through the elimination of those who thwarted that potential.”

Cardinal Cupich added: “We need to listen hard to Fritzie’s question: ‘How could this happen?’ We need to understand that it all began with words. Words that called people ‘other,’ that targeted people as worthy of fear, or threatening to our national greatness, and then eventually dangerous and requiring elimination.”

“Next year,” he added, “the world will mark the 75th anniversary of the liberation of the death camps the Nazis used to imprison and exterminate 6 million Jews and countless others. We owe it to those who perished and their families never to forget.”