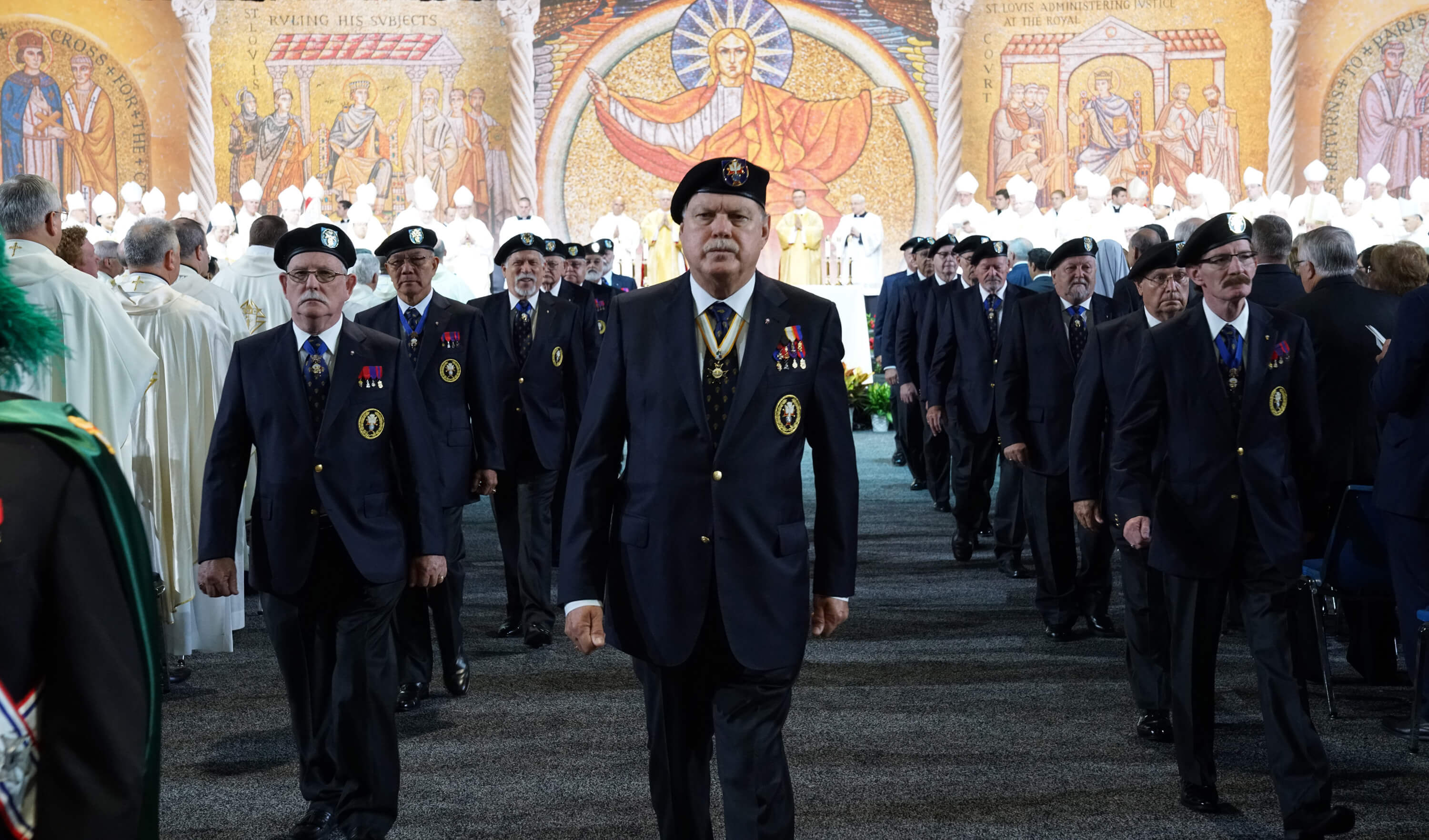 Come July 1, Knights of Columbus get a new look after 79 years

A long-standing tradition will end this summer as the Knights of Columbus discard the ceremonial capes and plumed chapeaus of its fourth-degree members.

July 1 will mark the end of a 79-year era when the Knights change the ceremonial Color Corps regalia long associated with the fraternal Catholic order. The Color Corps, which acts as an honor guard at religious and civic functions, is distinguishable by its official regalia of tuxedo, cape, chapeau, white gloves and sword.

The preferred dress for fourth-degree members worldwide will no longer include the cape and chapeau. The new uniform will be a jacket and beret. The ceremonial swords will continue to be part of the uniform.

The Knights have undertaken extensive research in how to attract new members and have heard one constant from men as to why they won’t join the order.

“If I had to wear that regalia, I wouldn’t join the Knights,” is the refrain Heffernan said he has heard often.

It was a major point raised in a roundtable in March at the Archdiocese of Toronto chancery when the Knights gathered a group of men to discuss their impressions of the organization. Several men noted the cape and chapeau as drawbacks.

Heffernan said some misconceptions exist about the uniform. Many believe all Knights must wear the regalia, but it’s only for fourth-degree members, “and even then you don’t have to wear the regalia,” he said. “You could become a member, be a fourth degree and never buy a uniform. … You’re just not part of the color guard.”

The uniform of the fourth degree has undergone several changes since it was adopted in 1900. But it has remained relatively the same since 1940, consisting of a plumed chapeau, a tuxedo, a cape and a ceremonial sword. The modernized version will be a blue blazer with the fourth-degree emblem, dark gray slacks, a blue tie and a black beret.

In 2017, the international Knights’ board of directors unanimously voted to adopt a new uniform for the fourth degree. The new look debuted at the 135th Supreme Convention in St. Louis that year. The vote came after three years of testing and discussion within the membership. Board members believe it will open the doors to a new generation of Knights.

The move has been met with significant resistance, much of it from Canada, Heffernan said. That included an online petition that garnered almost 10,000 signatures “to reconsider the consequence of this proposed change and keep the existing regalia of the Fourth Degree Assemblies that the Knights and the rest of the world has come to recognize and love.”

Heffernan understands and sympathizes with those seeking to keep tradition alive.

“You’re always going to have the diehards who are going to wear the old regalia,” he said. “If I was 80 years old, I’m not going to go out and buy a new uniform.”

The Knights have recognized this, and the old regalia has not been outlawed. Members pushed for a grandfather clause to allow Knights, particularly older members, to continue to wear the old regalia and it was granted, he said.

While there has been resistance, there has also been significant buy-in, Heffernan said. Overall, Knights numbers are stable, even growing worldwide, with almost 2 million members across the globe.

There are 55,000 Knights in Ontario, with 3,400 being fourth degree. Heffernan said the mandate is to bring in 2,000 new members this fiscal year, which ends June 30, and they are just shy of attaining that number. That will keep the membership stable because up to 1,500 members die each year, he said, and others leave for various reasons.

That stability is reflected in demand for the new regalia. Heffernan said their supplier is having difficulty keeping up with orders, and there is a long waiting period before a member can get the new uniform.

“Even as it is right now,” he explained, “the supplier is making the uniforms as fast as they can, but if you were to order one now it would probably be the fall before you could get one.”