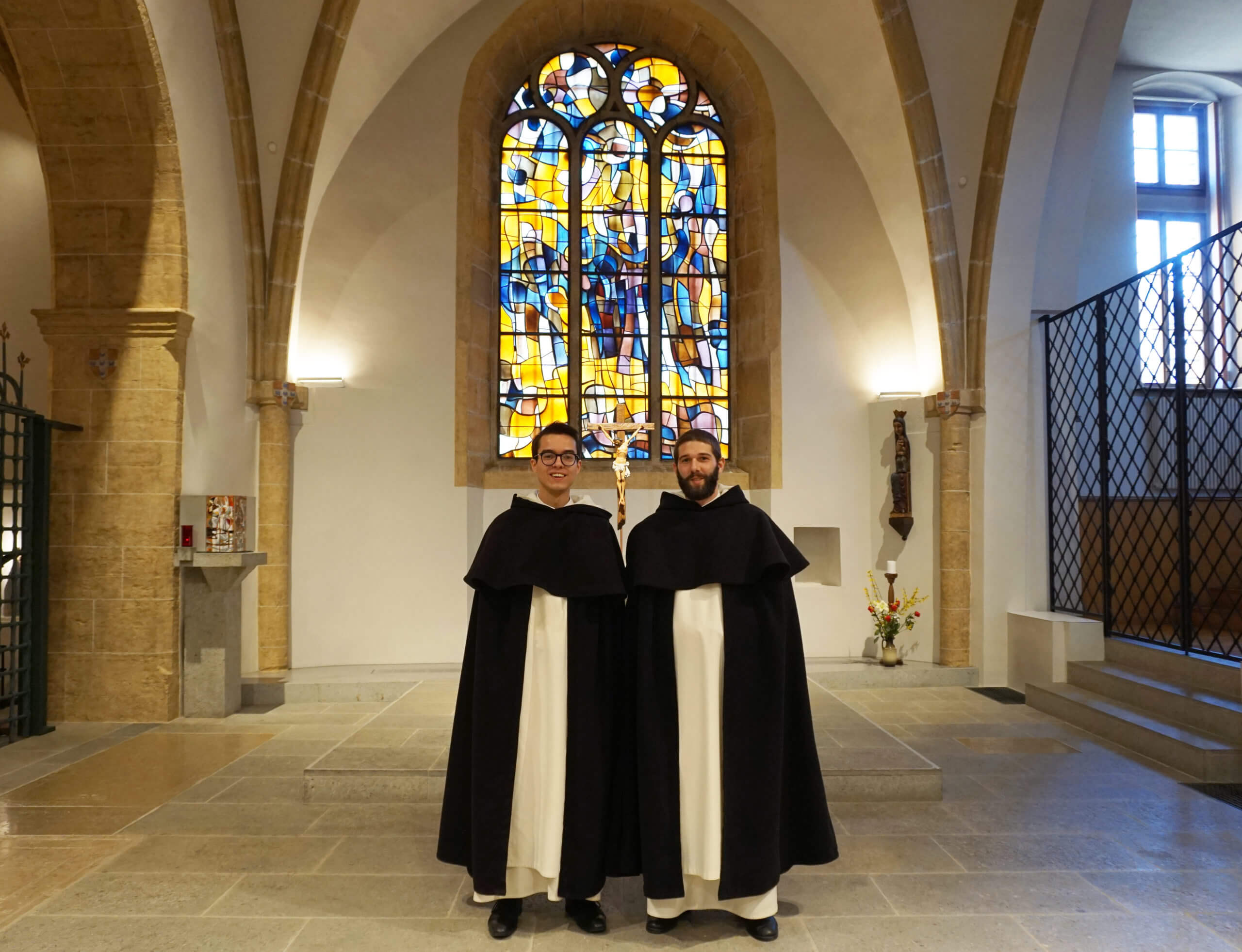 Photo Credit: CNS/courtesy OPChant - Dominican Brothers Stefan Ansinger and Alexandre Frezzato pose for a photo at the Monastery of the Dominican Nuns of Estavayer-le-Lac in Switzerland. The religious brothers teach weekly lessons in Gregorian chant in the Dominican tradition through their YouTube channel OPChant.

Internet users around the world are following Brothers Stefan and Alexandre, and they are getting positive feedback on the project from all over too.

“The amount of positive feedback from all sides is very impressive, it shows that we are responding to a current need,” said Brother Alexandre in a recent interview posted on the website of the Dominicans’ Swiss province.

Brother Alexandre is from Valais, Switzerland, and Brother Stefan is from the Netherlands. Both are seminarians studying at the University of Fribourg. They live in the Priory of St-Hyacinthe.

Launched last November, OPChant is the only channel on the internet that teaches Latin chant in the Dominican tradition in a systematic way. The channel is entirely accessible in English. Each video includes in its description a PDF of the score and the Latin words so people can study along with the brothers. They release one video a week, carefully following the Catholic Church’s liturgical calendar.

“I know that our videos have helped Gregorian choirs in England and America,” said Brother Stefan. “That was the original purpose of our project.”

The brothers said Americans “are the most enthusiastic” students, followed by Canadians, but “there are many and equally enthusiastic echoes in Switzerland and the Netherlands, which is normal given that these are our countries of origin,” Brother Alexandre said.

Reaction to the OPChant project among fellow Dominicans also has been good.

“I remember one of our older brothers giving us some very useful advice when we recorded a few songs,” Brother Stefan said. “He asked us to extend some notes and breathe at times. It was really beautiful. An older brother who had been trained in singing at the time was giving us advice to improve our singing, in a completely spontaneous way.”

“Most brothers are very supportive and enthusiastic,” added Brother Alexandre.

Noted Brother Stefan: “Many of the older brothers are very happy that there are younger brothers who are rediscovering this tradition. I saw that a lot of brothers shared our project also on social networks.”

The two make excursions to film new videos “in beautiful monastic churches,” Brother Alexandre said, which has led “to the creation of a small network of communities in which we are welcomed,” mainly communities of nuns, such as the Dominicans of Estavayer in Switzerland and Chalais in France or the Cistercians of the Maigrauge in Fribourg.

The two brothers said that, for them, the intellectual and spiritual fruits of carrying out this project are many, from the study of texts — “It’s important to know what you’re singing,” said Brother Stefan — to “efficiency, an increasing facility in deciphering, familiarity with Latin and an awareness of detail,” explained Brother Alexandre.

“I find that the song resonates in me throughout the day. This can create a certain experience of ‘endless’ prayer, as St. Paul puts it,” said Brother Stefan.

“What also touches me is the awareness of history; through this sacred song, which has remained the same, which accompanied the common prayer of the brothers, loving the Lord together, studying together,” Brother Alexandre remarked. “We have here a treasure which binds us to those who precede us and who gave their lives for Christ in our Order. It’s our turn to pass it on!”

The ancient musical tradition of the Order of St. Dominic is being taught by these young brothers through ultramodern means. The brothers teach anyone who is willing to learn. It’s entirely free, and it’s as simple as going to OPChant on YouTube and clicking the red button marked “Subscribe.”