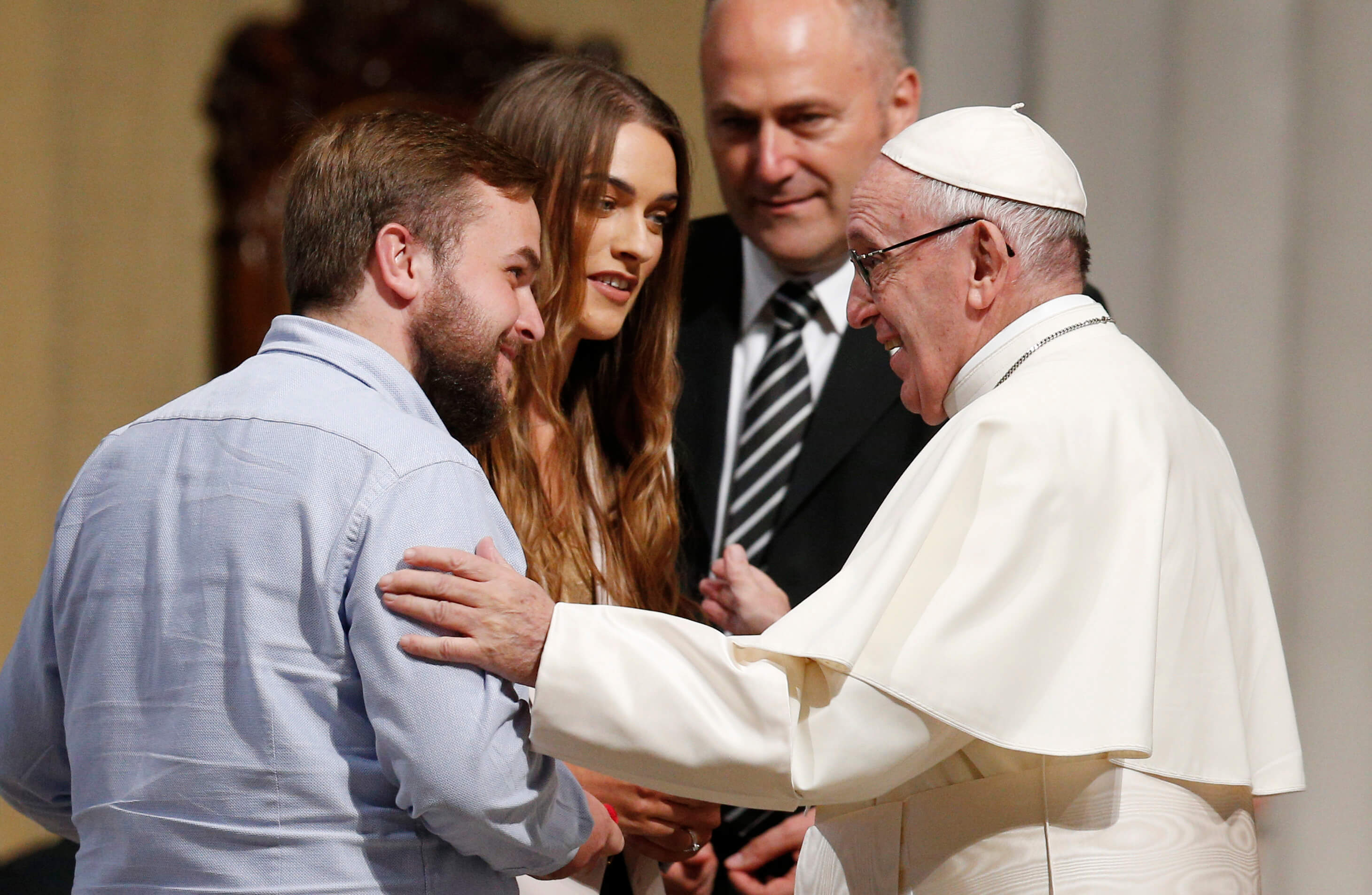 God wants every person to love and be loved, creating a family or community where love is nurtured and shared with all who are poor, lonely or in need, Pope Francis said.

En route to joining thousands of people at the World Meeting of Families, the Vatican-sponsored event being hosted in Dublin, the pope met Aug. 25 with more than 350 recently married or soon-to-be married couples in the city’s St. Mary’s Pro-Cathedral.

Before listening to what a couple married 50 years had to say to the younger spouses, Pope Francis went to a side chapel where the Blessed Sacrament is reserved and where a special candle burns. Known as the “candle of innocence,” it is a memorial to the victims of abuse at the hands of Church personnel.

Brief, but significant events came immediately before and after the pope’s meeting with the young couples. First, he stopped outside the Church of Our Lady of Lourdes to venerate relics associated with Matt Talbot, a candidate for sainthood who found in faith the strength to overcome alcoholism. And after the meeting, he went to a day center for the homeless run by Capuchin friars.

Looking at all the young couples in the pro-cathedral, Pope Francis told them he found it hard to believe how people say that young people don’t want to get married anymore. “To marry and share your life is a beautiful thing,” he said, thanking them for their witness.

He also had some kind words for the babies whose cries rang out occasionally during the meeting. “It’s beautiful to hear that music, the babies crying,” he said. “It’s the most beautiful music and the best preaching because it is a cry of hope.”

“Love is God’s dream for us and for the whole human family,” the pope told the couples. “Please, never forget this! God has a dream for us, and he asks us to make it our own.”

Many people today wonder if there is anything that can last forever, the pope said, but “marriage is unique.”

“It is about a love that gives rise to new life,” he said. “It involves mutual responsibility for the transmission of God’s gift of life, and it provides a stable environment in which that new life can grow and flourish.”

The sacrament of marriage, he said, adds to that relationship a share “in the mystery of God’s eternal love. When a Christian man and a woman enter into the bond of marriage, the Lord’s grace enables them freely to promise one another an exclusive and enduring love. Their union thus becomes a sacramental sign of the new and eternal covenant between the Lord and his bride, the church.”

If a couple is not committed to making their love grow, it won’t last, he said in one of many departures from his prepared text. “That ‘for life’ is a commitment to make love grow, because real love is not temporary. That is enthusiasm or, I don’t know, enchantment, but love — love is forever.”

When couples have children, the pope said, they are responsible for educating them in the faith and in love, a task that is accomplished most of all through example: praying together, going to Mass and helping the poor. But also being affectionate with one another.

“The virtues and truths the Lord teaches us are not necessarily popular in today’s world, which has little use for the weak, the vulnerable and all those it deems ‘unproductive,'” he told the couples. “The world tells us to be strong and independent, with little care for those who are alone or sad, rejected or sick, not yet born or dying.”

“Our world needs a revolution of love,” the pope said. “Let that revolution begin with you and your families!”

Later, at the Capuchin center with about 100 clients and volunteers, Pope Francis praised the friars for their policy of helping anyone who knocks at the door without first asking any questions. That, the pope said, is a sign of respect for the client’s dignity.

He told the friars that some priests like to “dig and dig and dig” into the lives of the people who come to them when it would be better to listen, to accompany and to offer forgiveness without asking endless questions.

And he told the clients: “You are the Church. You are the people of God. Jesus is with you.”