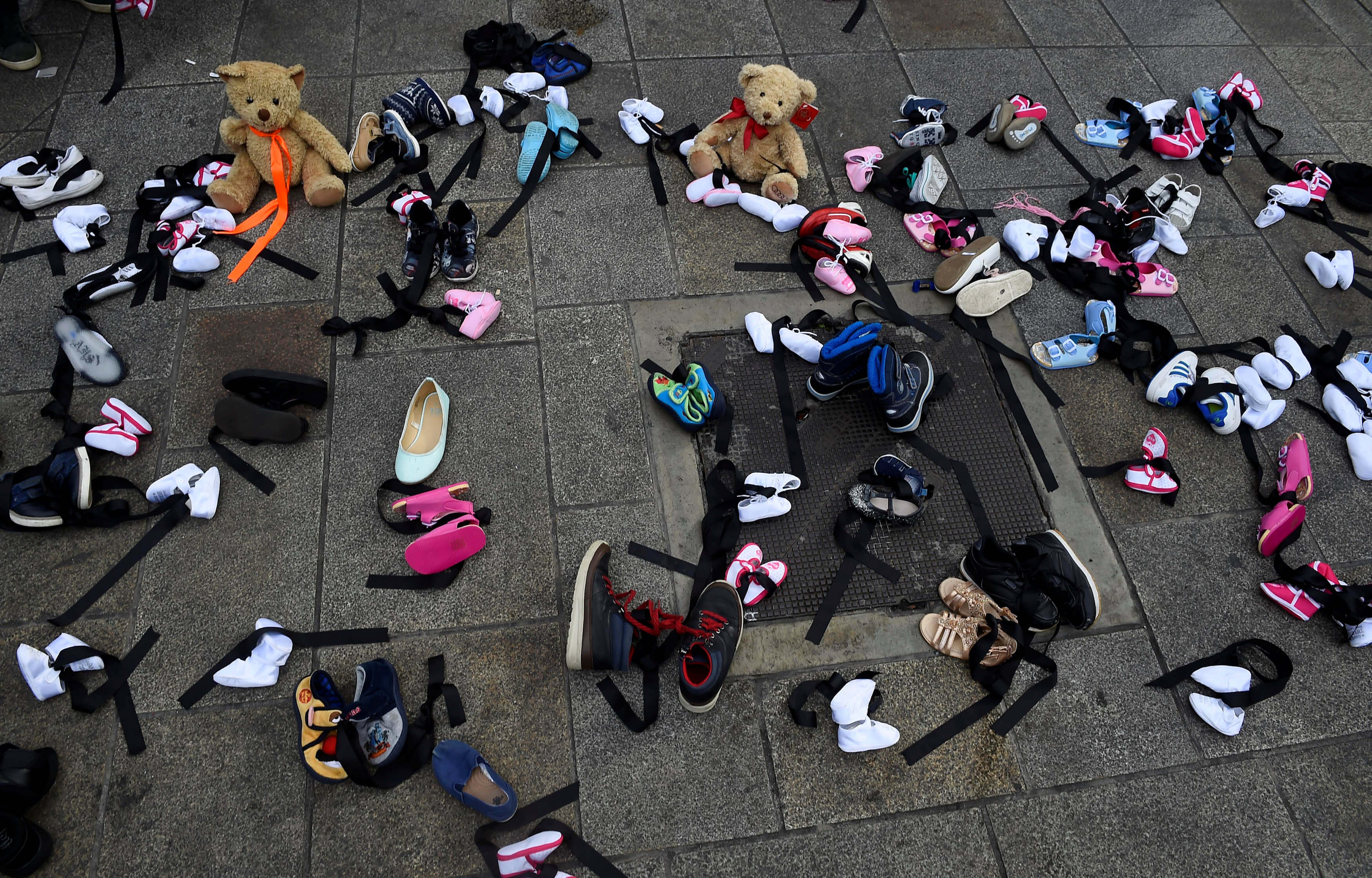 Photo Credit: CNS photo/Clodagh Kilcoyne, Reuters - Children's shoes and toys are seen on a sidewalk in Dublin Aug. 25 as part of a demonstration against clerical sex abuse in Dublin. Pope Francis met privately for an hour and half with eight Irish survivors of clerical, religious and institutional abuse.

Pope Francis spent 90 minutes meeting privately with eight survivors of sexual, physical and emotional abuse at the hands of Catholic clergy or in Catholic-run schools and institutions.

The meeting took place at the Vatican nunciature in Dublin Aug. 25, the first day of Pope Francis’ two-day visit to Ireland, the Vatican press office announced.

Afterward, two of the survivors published a statement describing the meeting. They said, “Pope Francis condemned corruption and cover-up within the Church as ‘caca’ — literally filth as one sees in a toilet, his translator clarified.”

The Vatican named seven of the survivors who met with the pope and said the eighth asked to remain anonymous. Those named were: Marie Collins, a former member of the Pontifical Commission for the Protection of Minors; Father Patrick McCafferty, who was abused in a seminary; Father Joe McDonald; Damian O’Farrell; Paul Jude Redmond; Clodagh Malone; and Bernadette Fahy.

The sexual and physical abuse of children and vulnerable adults by clergy and religious occurred on an unprecedented scale in Ireland, leaving thousands of victims in its wake and toppling the authority and the social and political influence of the Catholic Church in Ireland.

Archbishop Diarmuid Martin of Dublin told reporters Aug. 22 that the number of children physically, sexually and emotionally abused by Catholic clergy and in Church-run institutions in Ireland was “immense.” It included victims in Church-run industrial schools, the Magdalene laundries, mother and baby homes and parishes.

Redmond and Malone, two of the survivors who met the pope, issued a statement afterward through their Coalition of Mother and Baby Home Survivors. They were the ones who said the pope used the Italian word for excrement to describe the situation.

According to the statement, “Malone, who was born in St. Patrick’s Mother and Baby Home in Dublin and adopted at 10 weeks old, asked the pope to clearly and publicly state that the natural mothers who lost their babies to adoption had done nothing wrong and (to) call for reconciliation and reunion for these families broken by the Catholic Church both in Ireland and around the world.”

Evidence suggests that the babies of many of the unwed mothers who gave birth to their children in the Catholic-run homes were placed in adoption without the consent of the mothers.

Redmond was born in Castlepollard Mother and Baby Home, the statement said, and was adopted at 17 days. He asked Pope Francis to call on the religious orders that ran the homes “to accept their responsibilities for the horror that went on for generations in the homes.”

“The pope did apologize to all of us for what happened in the homes,” their statement said.

Redmond and Malone gave the pope a letter claiming some 100,000 single mothers were forcibly separated from their babies and usually were told “it was a mortal sin” to search for the children later.

“As an act of healing, Pope Francis, we ask that you make it clear to the now elderly and dying community of natural mothers and adoptees, that there is no sin in reunion and rather that it is a joyous event that should be encouraged and facilitated by the Catholic Church.”

Major revelations about sexual and physical abuse in Irish Catholic institutions and how Church officials covered it up started to become public in the mid-1990s. A series of judicial reports detailed a pattern of cover-up and a tendency to put the avoidance of scandal and the reputation of the Church ahead of the needs of those who were abused. Four Irish bishops resigned after being criticized for their handling of abuse allegations.

When the crisis was at its high point in 2010, then-Pope Benedict XVI wrote a letter to the people of Ireland and addressed survivors directly: “You have suffered grievously, and I am truly sorry. I know that nothing can undo the wrong you have endured. Your trust has been betrayed and your dignity has been violated. Many of you found that, when you were courageous enough to speak of what happened to you, no one would listen.”

Pope Benedict ordered an apostolic visitation of Ireland’s four archdioceses, its seminaries and its religious orders.

Before the pope left Rome for Ireland, the Vatican had said the pope would meet with some survivors.

Greg Burke, Vatican spokesman, told reporters that even in 2015 when Pope Francis chose Dublin as the site of the World Meeting of Families 2018, he knew that the history of abuse and the ongoing trauma it caused would be on the agenda.