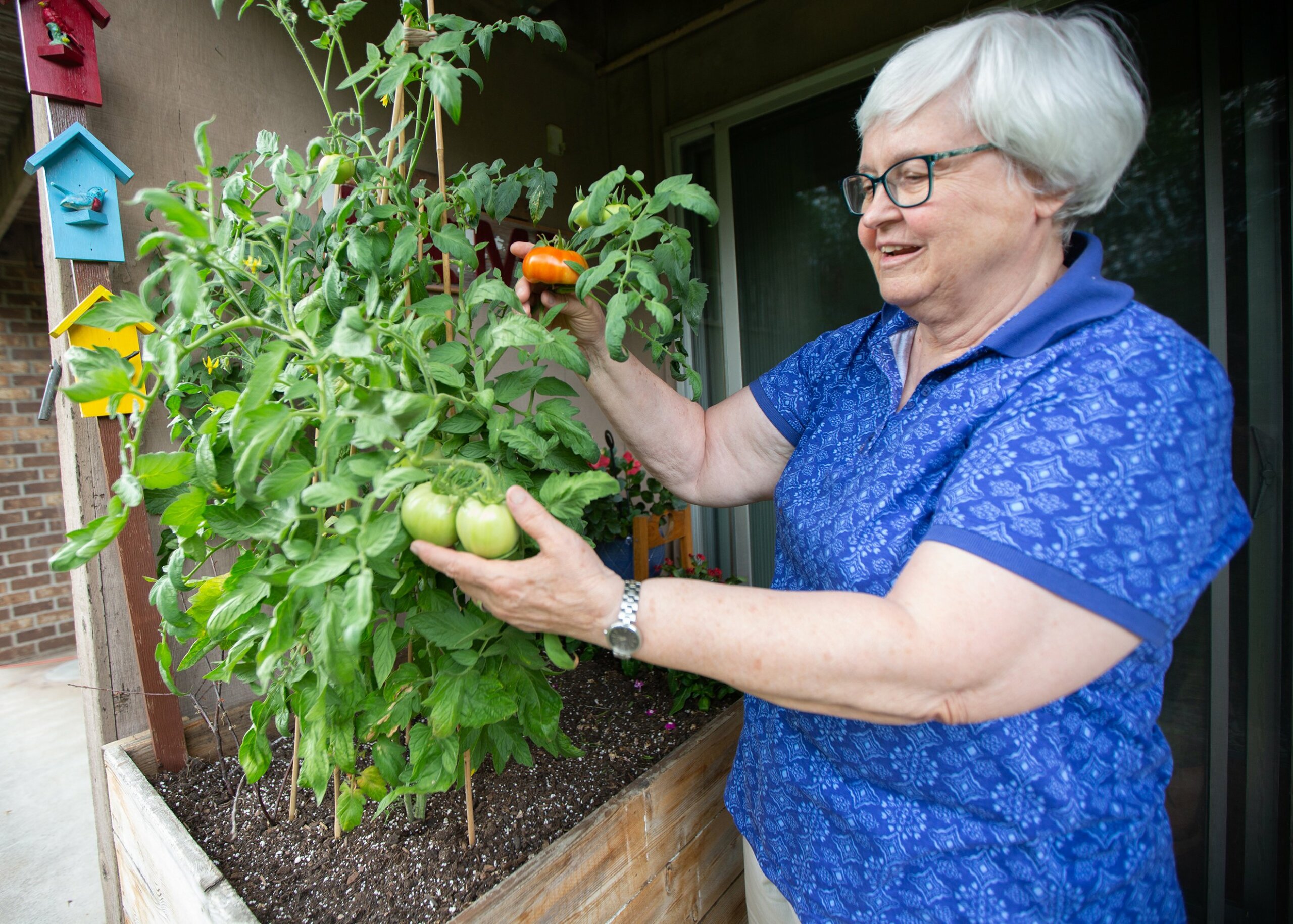 Photo Credit: CNS/Dave Hrbacek, The Catholic Spirit - Sister Kathleen Storms, a School Sister of Notre Dame, grows tomatoes and other vegetables in a raised garden bed made by her brother with recycled cedar planks at her apartment in West St. Paul, Minnesota, Aug. 17.

Sister Kathleen Storms hopes a calendar of prayers and suggestions for action during the upcoming worldwide Season of Creation will help people “understand that simple options can make an important difference in our care for creation.”

Meatless Mondays and shopping at farmer’s markets are among actions proposed by the Care for Creation Team of the Archdiocese of St. Paul and Minneapolis to observe the season.

Sister Storms, a School Sister of Notre Dame, is a member of the team who wrote the calendar.

She said she studied resources on Catholic social teaching and ecology provided through the Catholic Climate Covenant, which was formed in 2006 by the U.S. Conference of Catholic Bishops with partners including Catholic Relief Services, Catholic Charities USA and St. Paul-based Catholic Rural Life. She worked on the calendar for about three weeks.

“My best creative time is in the morning,” said Sister Storms, whose ministry since the 1990s has centered on environmental education. “It was a very prayerful experience,” she told The Catholic Spirit, the archdiocesan newspaper.

The internationally recognized Season of Creation was proclaimed in 1989 for Eastern Orthodox Christians by the late Ecumenical Patriarch Dimitrios I of Constantinople.

In 2015, Pope Francis encouraged Catholics to welcome the season, the same year the pope wrote his encyclical on faith and the environment, “Laudato Si’, on Care for Our Common Home.”

In his encyclical, Pope Francis calls on people to address pollution, waste and misuse of natural resources. He promotes “integral ecology,” that is, a realization that all things in the natural world are connected, and everyone has a responsibility to promote a healthful planet.

The season starts Sept. 1 with the World Day of Prayer for the Care of Creation and closes with the feast of St. Francis of Assisi, Oct. 4.

The archdiocesan calendar takes this year’s Season of Creation theme, “Listen to the Voice of Creation,” and logo, the burning bush of Exodus 3:1-12, and includes suggestions for each day, such as pastors introducing the season to parishioners at Sunday Masses Sept. 4.

Suggestions for Sept. 6 are using cloth bags instead of single-use plastic and declining to use a straw when drinking a beverage. Sept. 29 recognizes the feast of the Archangels Sts. Michael, Gabriel and Raphael, while urging people to join an environmental group to help protect the Earth.

Copies of the calendar can be requested at creation@archspm.org. Calendars also are available through parishes in the archdiocese and a public resources tab at tinyurl.com/24pdk9et, according to Care for Creation Team leaders.

The calendar is one of several efforts by the Archdiocesan Care for Creation Team — which consists of about 15 volunteer leaders and a network of parish-based Care for Creation teams — to bring “Laudato Si'” to life, said Adam Fitzpatrick, leader of the effort and social mission outreach coordinator for the Center for Mission in the archdiocese.

Leaders of the archdiocesan team held their first meeting in February 2020, before COVID-19 and pandemic restrictions hit. They did not meet in person again until October 2021, when they held a leadership team retreat. That experience led to developing retreats now being offered for parishes.

The Archdiocesan Care for Creation Team also recently worked with the University of St. Thomas’ Sustainable Communities Partnership through the school’s Office of Sustainable Initiatives to produce an online survey last spring that resulted in 82 usable responses from students averaging age 20. The survey gauged their knowledge and concern about climate change.

The archdiocesan team also collaborated with a theology and the environment class at the university last spring that reviewed reports and data indicating climate vulnerabilities in the Twin Cities.

It found that the region’s population faces health risks from significant changes in temperature and precipitation, including unsafe, hot temperatures and exposure to new diseases.

Minnesota is among states across the country experiencing the most significant temperature changes, the study found, with the state an average of 3 degrees warmer than 124 years ago.

Weather fluctuations also have increased, with 10 of Minnesota’s warmest years and 10 of the state’s wettest years all occurring since 1998, the study said.

In the past 20 years, only 59 percent of Minnesota’s winters have reached 40 below zero, while that temperature was reached in 88 percent of the winters between 1944 and 1994, the students found. Minnesota’s growing season has increased by two weeks since 1950, increasing crop pest problems and allergen production such as pollen.

Students concluded their nine-page report on climate vulnerabilities by stating: “Helping to restore sustainable environmental stewardship is essential to protect God’s creation and most vulnerable populations.”

Among other findings, students’ feelings of sadness, anxiety, anger and helplessness over climate change rose more frequently than positive feelings of hope, optimism and empowerment, the University of St. Thomas’ survey said.

More than 77 percent of the students surveyed said they expect climate change to affect their daily lives in the future, while about 51 percent said climate change already affects their lives.

Depending on the question, 40 percent or fewer of the respondents said climate change influences their current decisions about politics, energy use, community engagement, course of study, spirituality and relationships. Percentages in those areas increased when asked about future decisions.

Those responses appear to indicate students believe there is still plenty of time to address climate change, Fitzpatrick said. However, he emphasized that the time to do so is now.

“The importance of responding early and being proactive is vital, especially if looking at long-term problems that will grow if current trends stay where they are,” Fitzpatrick said.

Among other ways being considered by the Archdiocesan Care for Creation Team to respond and spread the word about the students’ environmental study and survey, Fitzpatrick said, is continuing to emphasize that “nature has always been a key part of the exercise of Catholic spirituality.”

Share This Post
Pope Francis, Catholic Relief Services (CRS), Catholic Charities USA, Laudato Si', Featured eNews, Care of Creation, Season of Creation, Sister Kathleen Storms
See More
Last Article
Service is a calling for all, not a select few, pope says
Next Article
Commending our loved ones to God is an experience of hope
Back to Vermont Catholic Magazine